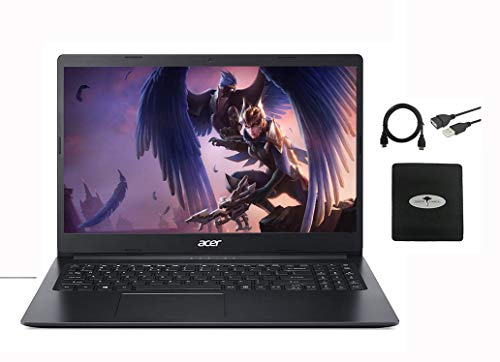 The Acer Aspire 1 is a $250 laptop with a Full HD resolution, a relative rarity among laptops of such generous pricing.

It does not offer much in terms of power and performance, what it brings to the table is a sleek and lightweight laptop that will not shy away from the brunt of your everyday productivity tasks.

This laptop is more suited to content consumption than creation, Internet browsing, and work on documents, it can call on applications like Microsoft office, and Microsoft Edge from the Microsoft store as it comes with the windows 10 home in S mode support.

The review model is the Aspire 1, A114-32-C1YA, it comes with Intel Celeron N4000 Dual-Core Processor that integrates an Intel UHD 600 graphics card.

The Acer Aspire 1 makes extensive use of plastic for the fabrication of its chassis, the lid also sports a brushed texture detail that adds finesse to what is ordinarily an uninspiring look.

The build features a slender and lightweight profile, rendered with a pitch-black shade that stretches in vast expanses from the lid to the deck and the undercarriage. The only touch of color on this laptop can be found on the silvery Acer laptop logo embellished on the lid, and the white font of the keyboard ensemble.

The hinges permit rotation beyond the 180-degree mark, and a gap opens up between the bottom of the lid and the keyboard deck when it flips open. This helps to allow airflow around the area and to eliminate the small problem of friction-induced squeaks that would normally be heard at an earshot.

Users of this device will meet with a trace of flex while flipping open the lid or while pounding out on the keyboard, other than that, this laptop can boast of a fairly decent build.

There is also an HDMI that permits connection to external display devices, in addition to the time-tested but dated Ethernet port which provides a viable channel for delivering the perks of wired connection.

For Wireless connectivity, an 802.11ac Wi-Fi feature offers an internet connection at blistering speeds and with extensive coverage to boot, While Bluetooth 4.1 will come in handy if you wish to connect to your device peripherals.

The keyboard on the Acer Aspire 1 comes with its pros and cons, the keys are well spaced-chiclet style, with good tactile feedback and springy return, making for relative ease of typing.

Then there is the 1.2-mm travel distance that is about a fraction short of ideal, an absence of key backlighting that results in a handicap when typing in dimly lit settings, and a keystroke actuation force that might strain your hands during prolonged typing sessions.

The Precision touchpad gets bonus points for its ergonomics, its plastic surface is furnished with a material smoothness that eases navigation and enhances cursor control, it is sited closer to the bottom left of the keyboard deck than to the right.

The touchpad area sports a generous footprint with no buttons or delineation for right and left click, but it enjoys the full complement of windows multitouch gestures.

The Aspire 1 is equipped with two bottom-firing speakers whose performance does not particularly make a good case for sitting speakers under the carriage of laptops.

The bass and the stereo split are skimpy, even at the highest volume possible.

The audio department is an area of compromise for this laptop, the quality of the sounds on offer is nothing to write home about.

The Acer Aspire 1’s 14-inch, 1080p(Full HD) display is probably its strongest point. It employs a TN panel (Twisted Nematic) that features a low input lag as well as a decent refresh rate that enhances the overall quality of display.

The matte finish on the screen comes in handy in brightly lit settings by serving as an anti-glare provision for blotting out the ensuing reflection that tends to reduce visibility.

What it does lack is a variety of viewing angles and a handicap in its color reproduction and accuracy, and while the maximum brightness of 206 nits falls short of the 239 nits average for budget laptops, it still tops that of other laptops in the same pricing category.

Still, this laptop punches above its weight and price too with the quality of display on offer, the display still turns out crisp and clear text and visuals.

It still manages to reproduce 71 percent of the sRGB color gamut, in comparison, the HP Stream 14 and Dell Inspiron 15 3000’s posts 82% and 74% respectively which are still below the 87% mark for budget laptops.

The Intel UHD 600 graphics card on this laptop is one-half of the processor package that this laptop draws from. It comes embedded in the N4000 processor and is in the low-end segment.

This processor is severely underpowered and ill-equipped to take on a vast majority of your graphic tasks as it has a massive deficit in its number of cores, shaders, and execution units.

The limited power in its reserves can only suffice for basic system tasks like photo editing, video playback, and some very light gaming.

On the flip side, users of this laptop can choose from the vast offering of compatible applications and games in the Windows’ Microsoft 10 home app store.

Also, the power draw of this graphic processor has been pegged back to very tolerable levels, so users do not have to constantly be on the lookout for a power source when engaged in graphic-demanding activities such as graphic design, artwork or drawing with a laptop for extended periods.

This laptop is simply not cut out for gaming, the graphics card is wired to only take on tasks with minimal graphic requirements. Except the games are very well optimized like dirt rally, sims 4, or asphalt, there is no chance of it being playable on this laptop.

You can comfortably play the laptops’  pre-installed games, basic PC games, and every other game that can be run at very low framerates without experiencing a slew of lagtimes and stuttering that is the bane of gaming.

The lack of dedicated graphics memory coupled with the massive eDRAM cache deficit serves to poorly set up this laptop for any sort of decent gaming.

To put things in perspective, this gaming handicap is the huge price that is paid for the generous pricing of this laptop.

The battery on this laptop does not offer any bright spots, it takes about 2 hours at the least to charge this laptop from zero to 100%, and when it does reach full charge, it is largely short-lived.

The battery performance is rated just short of average, it is helped by the tolerable power draw of the processors in this laptop, their power-efficient design lets this battery off the hook.

The energy-efficiency and low thermal design power (TDP) rating of this laptops’ processors allow for a fanless design to be incorporated, it is a get-out-of-jail-free card that the makers of this laptop are quick to toss around.

On paper, there is a significantly reduced risk of this laptop going into a heat-induced overdrive, but this laptop is bound to betray that promise on some occasions.

It is a mixed bag of sorts, on one end, the whirring noise and occasional racket of fans are non-existent with this laptop, but the heat that builds up on multitasking or during extended runtimes will not be quickly dissipated, leading inevitably to a smattering of hotspots, especially under the carriage and around the keyboard deck and touchpad area.

This laptop is equipped with an Intel Celeron N4000 CPU, integrated with an Intel UHD 600 graphics card, it pairs with a meager 4GB of RAM and a paltry 64GB of eMMC flash storage, there is not much to expect with these specifications on offer.

This laptop simply lacks the raw materials to fire on all cylinders, multitasking is laborious, there is a significant limit to the number of tabs that can be simultaneously run, and it fires blanks on most gaming and demanding tasks.

The two cores of this processor can reach a maximum speed of 2.6 GHz, enough to handle less demanding everyday tasks. What you can do with this laptop is stream movies, watch videos, surf the web and take on basic office tasks. The processor will throttle or flat-out blackout on reaching the threshold for processor activity if you attempt to push it beyond its limits.

And with the Windows 10 in S Mode feature, users of this laptop can access the vast array of applications in the Microsoft store, some of which are optimized to run smoothly on this laptop.

The Acer Aspire 1 is sold at Chromebook-level pricing for users that are sold on a Full HD display, a flexible port ensemble, and the versatility of windows 10 in S mode.

As expected, it gets its fair share of shortcomings, chief among which are a so-so battery, a subpar webcam, and the occasional sprinkling of hotspots around the keyboard deck at the peak of its operation.

It remains to be seen if all of these concessions and tradeoffs are worth the payoff.