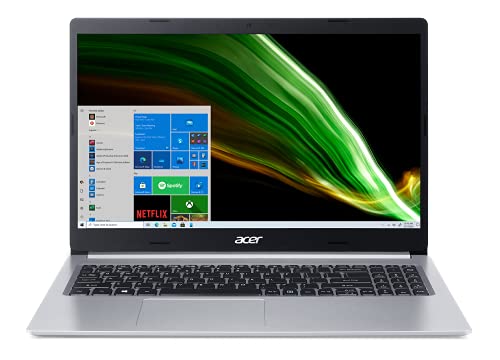 The Acer Aspire 5 can not boast of rockstar looks, and looking at it, our impression was that it’s unlikely to win any beauty contests. It’s not ultraslim or ultraportable, its outward appearance will not get many people swooning with desire, and when you lift the lid, it sports unattractively large bezels. But it does get the job done pretty comfortably and at the price it’s offered at, falls firmly within bargain territory.

In any case, performance is the most important metric and on this score, the Aspire 5 stands up to be counted. Depending on the configuration, It packs either a 10th Generation Intel or AMD Ryzen processor, AMD Radeon Vega 3 GPU, and uber-fast, SSD-based storage. With this arrangement, the Aspire 5 can power through most productive and content creation tasks, and even some light entertainment.

Acer offers the Aspire 5 in a wide range of configurations including the Aspire 5 R6DE. The model we tested was equipped with the latest AMD Ryzen processor, 4GB of RAM, AMD Radeon Vega 3 GPU, and 128GB of SSD storage. The 15.6 inches 1920 x 1080-pixel display, along with the 48Wh battery are features that all the models share in common.

The Acer Aspire 5 weighs in at 3.9 pounds, meaning it would take hours of carrying it before your arms start to complain, although it fits awkwardly in a backpack, is obviously a better offering than the Acer Aspire 1. In terms of design, Acer does not give too much away, with an aluminum shell shielding a predominantly plastic frame.

The chassis is a bit flimsy, and it doesn’t take long for fingerprints to start to appear once you handle it. In a nutshell, the design of this laptop can best be described as no-frills.

The Aspire’s backlit chiclet keyboard is an unexpected surprise. It’s quite easy on the eyes, with a number pad stationed on the right side. That, to us, is a nice touch, even if the keys do not produce that satisfying click. That said, typing on the keyboard is comfortable.

The touchpad is placed slightly to the left, with a fingerprint sensor for extra security. It features a similar aluminum finish as the chassis and responds smoothly to touch.

The ports on the Aspire 5 are just diverse and many enough to satisfy all but the most demanding of users. Acer laptops made ample use of the space provided on this laptop’s left flank by filling it with a power jack, an Ethernet port, an HDMI port, two USB Type-A ports, and one USB Type-C port. Things are a lot less dense on the other side, with a headphone jack, another USB Type-A port, and a Kensington port making up the ensemble. The absence of a microSD card reader is a minor annoyance, however.

The 15.6-inch 1080 pixels display of the Aspire 5 is great for both work and entertainment and compares favorably with others within its category. The display is not very bright at 245 nits, even though it is hardly the worst. It does mean that things on your screen will be harder to see in bright lights.

The Aspire 5 achieved 63 percent on the sRGB color gamut in lab testing, placing it on level terms with the Asus VivoBook, which costs the same. With its 111 percent color gamut, the Lenovo Yoga C740 is a fantastic bargain. On the Aspire 5, you’ll love viewing films and browsing the web, but for those picture editing and video editing tasks, you may have to get a different monitor with superior color reproduction.

The Aspire 5’s audio is another of its strong points. It’s loud enough to fill a room and the speakers’ bass is actually pretty decent. Sound reproduction is close to being accurate and there cannot be too many complaints here.

4GB of RAM, 128GB of SSD storage, an AMD Ryzen 3 CPU, and AMD Radeon Vega GPU do not sound thoroughly impressive, but the Aspire 5 model we reviewed packs enough power in its frame to execute most day-to-day tasks with accomplished ease. We were able to cycle through as many as 40 open tabs on Chrome at a go, with several other apps open and running in the background, yet the laptop did not slow down a bit.

The AMD Radeon Vega GPU can support more than the basic games, making it a big plus if you have more than a passing interest in gaming. Most Esports games will run smoothly on the laptop, but for the AAA titles, you’ll have to make a few adjustments to the settings. The Aspire 5 should be good for about 40 fps if you don’t mind playing with reduced graphics.

The Aspire 5 manages heat well enough. For day-to-day tasks and office work, and even a bit of content creation, it operated pretty noiselessly, and the temperature hovered around 70 degrees Fahrenheit, way below the threshold of 95 degrees.

The fans do have a habit of cranking themselves up quite loudly in the middle of more intense tasks, however. Perhaps because of this, the laptop never gets so hot that it becomes uncomfortable.

The Acer Aspire’s battery is the laptop’s one big laptop. It underwhelms massively, falling short of the category average by a significant 3 hours. This laptop only offers about five hours of performance between charges, and that’s without doing anything too heavy. It has a tendency to drain the battery really fast, making it unsuitable for people who are constantly on the go, or who do not have ready and steady access to a power source.

There’s a fair amount of bloatware in the laptop, just as you’d expect in a Acer Windows 10 machine, even the Nitro 5 laptop. This usually is not much of an issue; you can just ignore them or find the time to uninstall them all. However, consistent notification pop-ups from Norton and others may make it more difficult to do the former.

The Acer Aspire 5 offers some appealing high points; impressive speakers, good display, and a competent processor chief among its charms. It also boasts a decent GPU, and the keyboard makes it very supportive of productive tasks. The Aspire 5’s battery is the one big drawback, however, and it rather diminishes the laptop’s allure a fair bit. Still, the Aspire 5 is a decent package for people for whom constantly staying connected isn’t a problem.