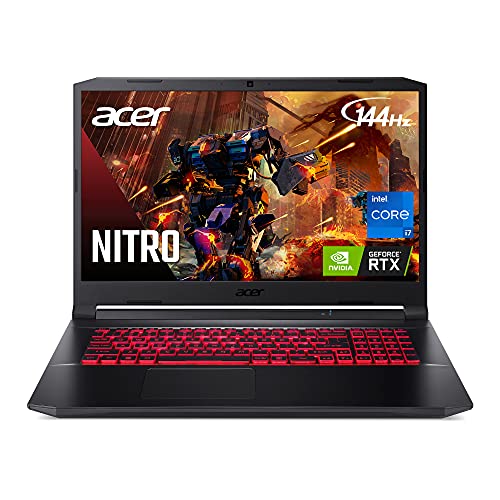 The Acer Nitro 5 is tailor-made for people seeking a decent gaming experience without forking out a fortune for it. It packs an NVIDIA GeForce GTX 1650 GPU, 256GB SSD, and an Intel Core i5-9300H CPU, which are decent enough specs, at least on paper. In our experience, though, we’ve come across laptops with hardware you’d feel should get the job done easily but which still managed to struggle mightily.

This laptop is not one of those. It’s not easy for laptops to strike the right balance between quality and performance at this price point, but Acer manages to do a good job with the Nitro 5. That said, there are some areas we wish were slightly better. For instance, the 256GB storage space is unlikely to be enough for most gamers, and the laptop itself could do with a little less bulk. Nevertheless, those are not likely to be deal-breakers and we’re sure that if you look closely at virtually any laptop, you’ll find at least one thing that could be improved upon.

For a budget gaming laptop, the Nitro 5 still manages to run demanding games smoothly. Naturally, some concessions are to be expected to keep prices on the low side, but, all things considered, the Acer Nitro 5 gaming laptop offers great bang for your buck.

The Nitro 5 is as sturdy as you’d expect an Acer laptop to be, but we were expecting a few sacrifices in quality to support the fairly low price of this laptop and it’s immediately apparent that some concessions were made on the design. The chassis has a plasticky feel that seems unable to keep from gathering fingerprints, the bezels are a bit chunky, and the flex can be a little flimsy, to be honest. On the flip side, though, this laptop’s plastic finish keeps the heat down to manageable levels.

The keyboard is backlit, and the keys sport red lettering on a black background. As usual, there’s special treatment for the WASD and arrow keys; they each feature highlights that make it clear what this laptop is meant for. Typing large documents is presumably not it, because while the keys produce decent feedback, they are fairly small (particularly the functions keys), with some irregular arrangements that may be confusing. There’s a dedicated key close to the keypad that provides one-touch access to Acer’s NitroSense utility page, from where you can personalize settings and view the laptop’s performance details.

There are no buttons on the trackpad and it does work smoothly and click well enough.

Acer didn’t skimp in terms of connectivity and the Nitro 5 offers a more than decent range of options. There’s a Kensington lock, a Killer Ethernet port, two USB Type-A ports, and an audio jack on the left flank of the laptop. On the other side, there’s a third USB Type-A port, a USB Type-C port, and an HDMI output, all offering convenient connectivity to as many devices as you want. In terms of wireless connectivity options, the Nitro 5 offers Bluetooth and Wi-Fi 6.

While the Nitro 5’s 15.6” IPS Full HD 1920 x 1080p screen is decent enough on paper, it doesn’t stand out. The Nvidia GeForce GTX 1650 graphics are somewhat dated, and you can get much better ones on other laptops, including those made by Acer. Nevertheless, we found that the white and red colors were pretty vivid, even though they didn’t pop. The IPS screen also offers a pretty decent 60Hz refresh rate, which is somewhat par for the course.

The Nitro 5’s speakers do not leave too much to be desired too. Sure, it could use a bit more bass, and it could be louder (because sometimes the fan noise drowns them out), but the sound from the speakers pretty much fills up a quiet room, and crucially, won’t make your ears want to bleed.

The Nitro 5’s specs may not be the most impressive on paper, but it was still able to deliver performance levels that compare favorably with the category average. We were able to play most AAA games at close to the benchmark 60 fps, and the laptop ran Esport games at almost 144 fps. For the more graphics-intensive titles, toning down the settings a notch will deliver a better gaming experience.

In our gaming tests, the Nitro 5 ran Assassinin’s Creedssassin’s Creed Odyssey at 58 fps, Far Cry 5 at 60 fps, and GTA V at 56 fps, all at ultra settings. We should probably say that the laptop struggled at certain points, and the fans complained loudly too. For a smoother gaming experience, not to mention a more comfortable one, you may have to make a few sacrifices.

The 250GB NVMe SSD may be insubstantial for dedicated gamers, but it does ensure that this gaming laptop boots up very rapidly. One other thing, the Nitro 5 is a multitasking pro, easily acing our Google Chrome and video transcoding tests. It was also able to copy a file of 4.5GB in about 15 seconds.

The laptop’s Intel Core i5-9300H CPU isn’t the fastest and it struggles to process the more intensive tasks at times. Unfortunately, this means that the Nitro 5 runs loudly, especially during gaming sessions, and it usually gets toasty very rapidly. The underside is the worst affected; temperatures may climb north of 120-degrees Fahrenheit, which is really pushing the limits of comfort.

While the heat problem can be fixed effectively by placing the laptop on any surface, the noise is a lot more difficult to deal with, especially since it tends to drown out the speakers during gameplay.

Most other features of this laptop are average, decent, or unremarkable, but the Nitro 5’s battery performance stands out by a long country mile. This laptop can last the best part of 11 hours, more than twice as long as others in the same category. Playing heavy games will significantly bring down the laptop’s run time, but this is true of every other gaming laptop available. If you’re performing lighter tasks such as creating word documents, surfing the web, or binge-watching movies, however, this laptop will take you a considerable distance before you’d need to find a power source.

There’s a prodigious amount of bloatware on the laptop.  In addition to the now-standard games such as Candy Crush and Solitaire, there are a ton of Windows apps and several Acer-branded software. If you don’t like or need these apps, prepare for a little downtime spent getting rid of them.

The Nitro 5 will not set the pulse of dedicated gamers racing, but for casual and budget gamers, it’s perfect. Understandably, it doesn’t offer the bells and whistles that most flagship gaming laptops do, and it may sometimes struggle to execute some of the simpler tasks. However, it does offer incredible staying power and a pretty decent gaming experience, which makes it a sweet deal at the price for which it’s offered.