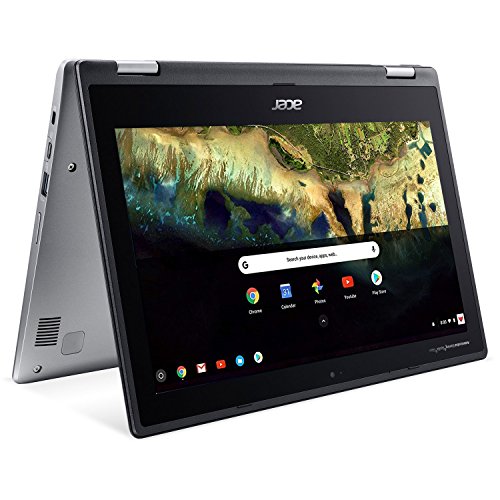 The Acer Spin 11 is a 2-in-1 Chromebook that is primarily targeted at the learning community, so it is not necessarily high-spec’d or high-maintenance, but it is most definitely not high-priced.

In its favour is a flexible port ensemble, an enduring battery, and a robust build that is designed to take a couple of hits and bumps along the way.

And with an Intel HD graphics 500 card, integrated into an Intel Celeron 500 processor, this Chromebook will plow through routine system tasks like web browsing, video playback, light gaming, and seamless multitasking.

The audio is not spectacular, neither is the display or any other specification for that matter, but an effective passive cooling system serves to get around the fan noise spectacle.

And in case you haven’t noticed, this Chromebook is a convertible, sleek, stylish yet simple, it gets a stylus to work magic on the touchscreen, and two USB Type-C ports to boot.

On the balance of things, this Chromebook still looks like a decent buy, and that is before you even factor in the price.

It is stylish but strong and military-grade durable, it also sports a Gorilla glass-coated touchscreen to boot, for protection against scratches, dents, and even bacteria most especially.

This education-centric Chromebook is designed to survive the impacts of accidental spills, bumps, and drops, occasioned by the rigors and exertions of everyday student life, from the classrooms to the dorm rooms.

With a weight of nearly 3 pounds, this Chromebook will come across as a little bit ponderous, especially in tablet mode, on the flipside Acer ships this device with a backpack, right on cue.

The lid is sturdy, as are the hinges that hold them in place, this Chromebook morphs fluidly from notebook to stand-up display, tent shape, and flat-out tablet in one fell swoop through a 360-degree flex-free turn.

The sides of this Chromebook are both lined with a USB Type-C port and a USB 3.0 port, both of which are capable of speedy data transfer rates, but with the former serving as additional means of charging and hi-res display output.

To the left, a microSD card reader and headphone/microphone jack are sited, making up the core of what is a pretty decent port ensemble.

For wireless connectivity,  the reliable 802.11ac holds sway alongside a Bluetooth 4.2, delivering the bandwidth that keeps you or your kids on the go, and in the loop.

The keyboard fares well despite the little room available, there is no Numpad to pound on, and the meager 1.1 millimeters of key travel should ordinarily present the risk of bottoming out on the keystroke, luckily, it doesn’t.

However, the typing experience is still comfortable, the keys stretch out almost entirely across the breadth of the deck, and they press with moderate actuation, while the LED backlight will come in handy for students that wish to burn the midnight oil.

The 4.1 × 2.3 inches touchpad is a mixed bag, it gets a sensitive plastic surface that responds keenly to multi-touch gestures, although a punchy press is required to effect actuation of the center click.

Then there is a stylus that glides with precision over an extra-sensitive touchscreen, leaving in its wake a trail of vivid impressions.

The speakers on the Spin 11 are attached to the bottom of the keyboard deck, and that speaks volumes about the quality and intensity of the audio that is delivered.

They will not give a resounding performance, so it’s best to refrain from blasting music off this laptop in large spaces as the speakers do not pack in the requisite punches to make any significant impact over long ranges.

The bass is feeble at volumes set to half-mast, it becomes more prominent as the volume increases, and at maximum volume, the bass is palpable to the point that it starts to boom. The speakers are more likely to fill up a small-sized dorm room than a moderately sized conference room.

The screen of this Chromebook employs an AHVA panel for its display, it works on the IPS technology as is evident in the excellent viewing angles, but with lesser colors and a bit more speed.

With a 1366 x 768 pixel resolution and an average brightness of 213 nits, the 11.6-inch screen churns out mostly satisfactory visuals. The display is not particularly vibrant or striking, but it still suffices for the average content consumption on YouTube or Netflix.

And with a surprisingly good 82 percent coverage of the color gamut, the screen makes a compelling case for the odd graphics slog. This Chromebook also features a touchscreen with a profuse fill of pressure points that makes it well-disposed for all your artistic and gaming exploits.

Then there is the Gorilla Glass screen cover, it serves to protect the screen from cosmetic damage, and also slightly enhances the details on the display, while still serving as an antimicrobial provision. However, there is one small caveat, the Gorilla glass does present viewers with a little more glossiness than would be necessary.

The integrated graphics card in this Chromebook is just about the most practical option that it can afford.

With a memory of 4GB RAM and a hard drive storage capacity of 32GB eMMC, the intel UHD 500 graphics processor can only make a go for the most basic graphic-demanding tasks and apps over the chrome web store and on the Android Play store.

It is a low-end processor on a Chrome OS, so don’t expect to be taking on the big guns in the graphics scape.

The prospects of gaming over a vast array of titles from the Google Play Store means that this Chromebook is not a downright write-off in the gaming department.

As much as this Chromebook is dedicated to the brunt of student work, it doesn’t hurt to sneak in a few games, kids love games, and Acer gets the memo.

You get to choose from a glut of options that are compatible with your Chrome OS and Intel UHD 500 graphics card, and there is a decent number to be found.

The games will be light, understandably so, but they will also be fast and smooth, and much better than the in-built games that are native to this Chromebook.

The battery life of this Chromebook might fall just short of the 10 hours that is promised, but it still offers enough to get by a day worth of school work, and the occasional spurts of light gaming. And with the energy-efficient Intel Celeron N3350 on processor duties, the power draw is very tolerable(about 6 watts), as against the typical 15W consumption thresholds of the Intel Core series processors.

The Intel Celeron N3350 processor that powers this Chromebook comes with a fanless design as it is passively cooled.

Acer sees no need to fit in a fan, and they are seemingly justified by the relatively cool and quiet running operation of this device.

This means that there is one less source of noise to worry about in the class, at home, or anywhere in-between.

The Acer Chromebook Spin 11 features a dual-core Intel Celeron N3350 processor, on paper this is a low-end processor, and with 4GB of RAM and 32GB of eMMC to boot, there is only so much this laptop can do.

Still, with a paltry base speed of 1.1GHz, this Chromebook flatters with its impressive showings over significant workloads. It can comfortably run a decent number of compatible Android apps and games, in addition to the regular chrome-based browsing and multimedia playback.

With great pains, and at clock speeds north of 2GHz, this Chromebook will plod through a pile of spreadsheets or a ton of tabs on Google Chrome, it can work a mile or two at the attendant risk of burnout.

And without the tell-tale signs of system warming or fan noise to serve as a warning reminder, you might be tempted to stretch this Chromebook beyond its limits, but this laptop will take it in its stride…until it can’t.

The Acer Spin 11 is a Chromebook with a focus on meeting the educational needs of growing kids, but it will not look out of place in a regular office.

With an enduring build and an equally enduring battery, this Chromebook can thrive under harsh handling and operating conditions, and still keep the lights on for hours on end.

This Chromebook will not stretch your pockets or your imagination, it can only go as far as the Chrome OS can allow-which is basically a roam around the internet and a go at some basic system tasks.

But if you need an affordable Chromebook with the specifications that your kids can easily work their way around, then look no further than the Spin 11.