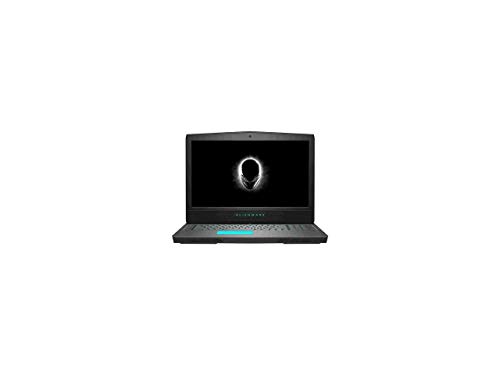 The New Alienware 17 R5 is built like a spaceship, designed to transport you to the otherworldly dimensions of gaming bliss.

While the processors, an overclocked GTX 1080 GPU, and an overclockable Core i9-8950HK CPU are a match made in gaming laptop heaven, there’s plenty more to make up a star-studded cast.

There are a surfeit of USB ports to plug your gaming peripherals into, a vibrant 17.3″ QHD display to feast on, and a keyboard that comes alive with multi-zone RGB backlit brilliance.

This laptop presents you with the chance to immerse yourself in the thrilling sights and sounds of gameplay. And as soon as the system starts to feel the heat, the fans will spring into action, right on cue.

They spin like crazy as they put out all the fires, and then they become a nuisance too. Thankfully, you can always ramp up the volume of the pretty punchy speakers to drown the racket. And if you do all of this after pulling the plug on the laptop, then the show will be brought to an end in no time.

This is a typical day in the life of the Alienware 17 R5, and it is almost always a field day, with little bumps here and there.

There is very little in terms of design that is new about this laptop. The size and weight, at 16.7 x 13.1 x 1.181 inch and 9.74 lbs respectively is the same as its predecessor, the R4 model, as is a large part of its material makeup.

The build still relies heavily on polycarbonate, with the bottom plate and the back lid sporting a metallic provision. As for the lid, and the keyboard as well, they are both flanked by thin strips of RGB LEDs. And that is beside the LED panels that light up the individual keys, as well as the entire touchpad area, giving the laptop a large part of its premium looks.

As with its predecessor, the hinge-forward mechanism is employed here. It means that the lid revolves about a couple of hinges that are sited at 1.25 inches away from the laptop’s rear. The lid offers very little resistance to being flipped over, even with the use of one hand. And it opens up to reveal a matte-finish screen with bezels in dire need of a trim and a 1080p webcam, Tobii, at the top.

Lastly, all but the front part of the keyboard are fitted with cutouts that serve as ventilation outlets.

In typical gaming laptop fashion, the rear edge is home to a number of ports, a large number in this case. The cast includes HDMI and Mini-Display Ports for external display output, a Gigabit Ethernet port, the Thunderbolt 3 port, DC charging port, and the Alienware Graphics Amplifier Port, all of which are sandwiched between two large vents.

The right edge benefits from the congestion at the rear to accommodate a solitary USB 3.0 port, providing sufficient navigable space for your mouse to enjoy. At the left, another USB 3.0 port is joined by a USB Type-C port and two separate 3.5mm jacks for the microphone and headphones.

With its Wi-Fi provision running on the 802.11ac standard and the Bluetooth, a 4.1 feature, the laptop caters to the wireless connectivity needs of its users.

There’s the multi-zone backlighting of the keyboard to start with, a stunning exhibition that parades some of the most striking LED illuminated brilliance that we’ve ever seen on a gaming laptop. And then there is more, N-Key rollover for simultaneous keystrokes, Numpad for data entries, and 9 macro keys that are user-programmable.

The travel of the keys, at 2.2mm, is apt, as is the 79g of actuation that is needed to effect a click, and the feedback that leaves you in no doubt that an input has been registered. What you get from this steel-reinforced TactX keyboard is seamless typing, with all the aural and visual aids that will come in handy while gaming. Then you also get a sturdy set of keys and a base by extension that will come out unstuck from the rigors of gaming.

The 4 x 2.1-inch touchpad is equally impressive, although it could have been better off with a few more inches of coverage.

There are buttons at its bottom part, and they bounce out against your fingers when you tap gently on them.

The dual-stereo speakers in this laptop make the most of the hinge-forward design to pack in a few punches. And when they start firing on all cylinders, the impact of their loud volumes can be felt all across an area the size of a large room.

While the bass is always within earshot, the ranges are palpable across all the threshold frequencies, making for gaming and movies to be enjoyed without the use of headphones. You can even dictate the pace of the tune with the Alienware Sound Center and its provision for customization of the sound presets.

A dual microphone setup is also featured here, with a capacity to filter out ambient noise and hiss, serving it ever so well during recordings and conversations over zoom or skype.

There’s a marginal drop in clarity that is observed when you tilt towards extreme viewing angles, but it’ll not leave you straining your eyes to get a good view. The brightness, measuring 350 nits at its peak will make for a vivid display, even in dimly lit settings. And it gets even better with the Nvidia G-Sync software.

Screen stuttering and lagging will be reduced to the barest minimum, making for a fluid transition of visual frames for a smooth and uninterrupted display. Then there’s a matte finish on the screen that will come in handy when you take your laptop outdoors and a 110 percent coverage of the sRGB color gamut that translates to decent color reproduction.

Lastly, at the top of the screen is a 1080p webcam, Tobii. Other than the brilliant visuals that it captures and projects, it also grants access to windows via a face recognition provision. It can be used to make cursor movement through eye contact, a feature that can be put to good use in some games.

Our review laptop opts for the Geforce GTX 1080 graphics card, the pick of the crop from a pool that also comprises the GTX 1060 and the GTX 1070 GPU. With this graphics card capable of being pushed up a couple of notches via overclocking, it puts its host laptop in a position of relative strength and speed.

If you’re more creatively inclined, then you can take advantage of its impeccable rendering and multilayer shading capacity to create content that will catch the eye, via Photoshop or Adobe Illustrator. And if you’re a gamer, which is most likely, then you’re in luck, this laptop will come out unscathed from long sessions of hardcore gaming.

All of the biggest titles have taken a shot at the laptop and found it to be a good match. Even better, the frame rates that it posts can measure up to the very best in the game, although you might have to step down a notch to 1080p. It reached frame rates of 67fps for The Rise of the Tomb Raider and Anno 1800, on high settings at 1080p.

The bump in resolution from Ultra in Full HD to QHD will also cause a not too drastic drop in frame rates for games like the Witcher and Far Cry new dawn to drop in frames. It should not be overly impactful on the quality of gameplay.

This laptop makes good use of its massive headroom by housing a 99Whr battery. It is a record figure by gaming laptop standards, although the staying power that it returns will not set any records by a long shot.

You should be able to get about four hours of regular computing from a full charge, and that’s with dialed-down system settings. The runtime that it posts edges out that of its predecessor, the Alienware R4, as well as a good number of other gaming laptops in its price class.

The Alienware 17 R5 is equipped with powerful processors that turn up the heat on the system, especially with their capacity to achieve overclocking at peak speeds. It is only fair that it gets an efficient cooling system that can put up with the toll.

Step into the Alienware Cryo-Tech v2.0 cooling system, The cooling system that it employs incorporates a web of heatsinks and a silicon-based solution to squeeze out the heat away from the processors. When the processors are firing at full steam, the heat that they give off is tackled head-on by the fans in full swing.

So you don’t necessarily have to worry about a drastic drop in frame rates or performance level as a result of the heat-induced throttling of your graphics card. The heat train leaves a trail along the path less traveled by your hands and other body parts during gaming. High traffic areas like the WASD keys, the Arrow keys, and the palm rest will almost always remain cool.

The processor options go from the Intel Core i7-8750H processor to that of our review laptop, the Core i9-8950HK processor, both of which can be overclocked from the base speed of 2.9GHz. What it entails for the laptop is a string of high-powered performances that will come up with the goods when called upon to deliver on any front.

While gaming is the order of the day for most users of this laptop, others will have a field day with more productive endeavors. Multitasking is a forte of the laptop too, with six cores to go round for any intensity of workload and round the clock for any duration of operation.

You can go from crunching tons of numeric data into spreadsheets or documenting important notes on Google Docs to rendering 3D visuals on Adobe Photoshop or Auto-CAD and still have massive room for more. Or you can split the screen across more than 30 open browser tabs in the Chrome web while toggling between playlists on Spotify, and then throw in a 1080p video into the mix, and the laptop will not budge.

And should you decide on an extra twist to the scheme of things, the Alien Command Center is your trusty companion for everything overclocking, CPU, and GPU. You can reach the peak of the processor’s powers, 5GHz, more than enough to blow away any computing task.

The battery and the laptop’s chassis will feel the heat no doubt, thankfully the fans always come fully dressed to the party, even overdressed too, some may argue.

The Alienware 17 R5 oozes premium class appeal across every breadth of its 17.3″ frame. From the robust build to the brilliant keyboard, the powerful processors, and the cooling system, everything is designed to deliver the very best of gaming.

Our review laptop features an overclockable 2.9-GHz Intel Core i9-8950HK processor and an overclocked Nvidia GeForce GTX 1080 GPU, along with 32GB of RAM and a 512GB M.2 PCIe SSD. It also gives out visuals in a QHD display and packs a 99Whr battery into its massive headroom.

These are powerful specs by every right, and they join forces to deliver a powerful gaming performance too. We’re not huge fans of the noisy fans or the massive heft, and the battery can always do with a little more power.

But if you have more than enough cash to splash on premium ware, and you need a gaming laptop that can give you a run for your money, then you should try out our review laptop.