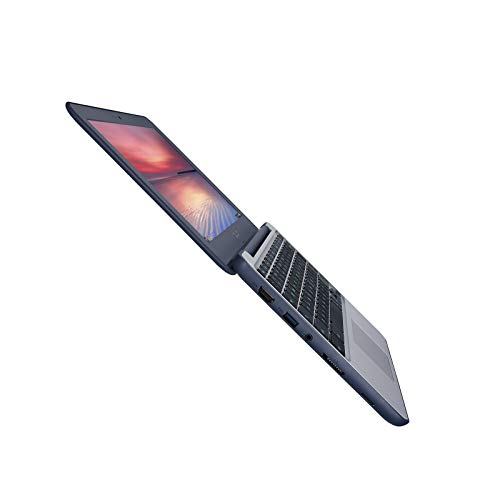 The Asus Chromebook C202SA is a competitively priced device with a pack of perks and props that make it stand out from the throng of Chromebooks in the market and in the classroom most especially.

This Chromebook can take in all the toil and tumble occasioned by the application of student life. It also offers a couple of other exciting features, like an ergonomic keyboard alongside plenty of battery power.

It’s audio is not particularly top-tier, and the display will not leave you in awe, but there is plenty of push in this Chromebook to power through a regular stream of academic workload and a dose of routine computing tasks.

With the C202SA, Asus rolls in a Chromebook with a build that is pleasing yet tough as nails and a utility that is easy as pie for kids or young people getting their first acquaintance with the Chrome OS or the PC.

Plastic is the material primarily employed in the makeup of its build, it gets a smack of style from a predominantly white-colored, and soft-textured exterior finish, and then it gets a streak of ruggedness for good measure

Asus bills this Chromebook as an entry-level and education-centric device, especially intended for those on the steeper ends of the learning curve, kids and high schoolers. So it gets all the security and protection that you could want from a kids laptop.

Around the perimeter of the keyboard deck and lid, a strip of grippy reinforced rubber bumper will offer up outstretched arms with which you’ll pick it up in one piece and with minimal impact after an accidental drop.

And the keyboard is hermetically sealed to forestall any impairment as a result of spills to any part of the keyboard ensemble. Kids will find this provision to be very useful. As for the hinge, it serves as a sturdy and steady pivot for the lid throughout its 180-degree swivel. The lid can be flipped to lie prostrate with the keyboard on a desk, bed, or anywhere else for a high-up viewpoint that will be the focal point of sleepovers and group works.

A weight of 2.6 pounds is not remotely the lightest, but its passable form factor ensures that it won’t wear down on a one-handed grab or a backpack snug.

The Asus Chromebook C202SA gets a decent stock of ports; two USB 3.0 ports, an HDMI port, and an audio jack, then there is an SD card reader, a port of call for all your extra storage needs.

Notable omissions include a USB Type-C port, as well as an Ethernet port, and in typical Chromebook fashion, there is no provision for an internal CD or DVD Drive.

To keep you connected, Asus delivers the dual-band 802.11ac Wi-Fi and Bluetooth 4.2, the wireless connection is steady and strong, although the speed is a little suspect.

The keyboard in this Chromebook is designed to be user-friendly, and then it is also structured to be resilient.

Most children and adults alike will experience relatively satisfactory degrees of comfort and security while using this keyboard.

The keys are cushiony, well-spaced, and well-sized with enlarged font sizes, while the travel distance is a little over 2mm. It is a shoe size that fits all hands on the keyboard deck.  For the best part, this keyboard will hold its own in the coffee klatch, and on the kitchen countertop, the keyboard deck is watertight, with the capacity to repel about 2.23 ounces of liquid.

The touchpad follows suit, with its prompt responsiveness and replete sensitivity, on a surface that is finished with a silvery gloss and satiny smoothness that flatters its plastic build.

For want of physical space and more affordable pricing options, most Chromebooks are not particularly equipped with top-drawer audio system components, the audio jack is most often the last resort.

This Chromebook does not buck the trend, as expected, although the tiny speaker grilles are sited on either side of the keyboard, as against the downward-firing norm, even more, impressive for a Chromebook with such a modest form factor.

If you’re the type that loves to hear the grasses grow, then this is just about the right speakers for you, the bass, the highs, and the lows all make subtle appearances as the stereo sounds leave the grilles.

There is one particularly disturbing challenge; the quality of the audio seems to gradually wane in response to an increase in volume, it is a dilemma that most users of this Chromebook will be faced with.

With a native resolution of 1366×768 pixels on an 11.6-inch screen, the C202 delivers a conventional Chromebook-quality display that very few people will speak highly of or speak ill of.

The bezels are somewhat chunky, and the screen fares modestly with brightness, although the visibility will take a hit in places exposed to direct sunlight or other intense light sources, depending on the degree of exposure. On the flip side, the screen does feature a matte finish on its surface, an anti-glare provision that is fitting for picnics or playgrounds. The display is not particularly colorful or crisp, the viewing angles are not impressive, and the colors pan out with an apparent fade when viewed from an off-center perspective.

As the hinge can permit a 180-degree rotation, the lid can be laid face-down flat with the keyboard deck, allowing for students involved in group work to each get a clear field of view. The viewing angle deficit will have a hard say though, as the most convenient viewing angle is dead-center at the screen.

Then there is a 720p camera fixed at the top of the display, the visuals that are captured and projected may appear a little grainy, but it will suffice for your online classes and skype calls with your pals.

The Intel UHD 400 graphics card integrated into the CPU of this device is a typical Chromebook fixture. Its impact is mild on the battery and the overall system health, but it is quite conservative with its performance.

With the limited number of shader cores and the tardy clock speeds, this GPU and Chromebook by extension will be mostly incapable of engaging in any complex graphic work.

The chrome web does string up a couple of less demanding graphic tasks that this Chromebook can comfortably handle, most photo editing tasks that involve basic cut and align features will be a piece of cake. Other tasks involving any degree of color shading or 3D rendering will be too much for asking.

Gaming is quite the chore with this Chromebook. The graphics card is simply not wired for gaming, especially high-end gaming.

For those looking to stretch their luck, the game plan will be to stick to older or less demanding titles, over the web or the Android app store.

This Chromebook gets all the perks that come with possession of a power-efficient CPU, not to mention the significant size of the battery. On a single charge, this battery will last for a period slightly upward of 10 hours, enough time to last through the rigors of school hours and the revelry of after-school hours. The battery life of this Chromebook is pretty impressive, even for a Chromebook, the runtime posted here betters that of the HP Stream 13 and the Acer Chromebook 13.

Other than the tiny speaker grilles sited at the right and left ends of the keyboard, this Chromebook is largely airtight, with no extra provision for venting. Thankfully, the CPU is very energy efficient, the heat production is very nominal in effect. It also incorporates a fanless design and it rubs off nicely on the overall resulting system temperature.

This Chromebook will most definitely run quietly throughout its lifecycle, and then it will mostly run cool too.

With the 1.6 GHz Intel Dual-Core Celeron N3060 processor and Intel UHD graphics on processor duties, the Chromebook C202SA will most often be restricted to the most basic computing tasks for the entirety of its lifecycle.

As this Chromebook is targeted at the learning community, the daily routine will most likely involve basic tasks like web browsing, word processing, and the occasional spurts of light gaming.

For all the aforementioned activities, this Chromebook is well-placed to suck it up, although there are hard and fast limits to the number of tabs that can be opened at once and the number of spreadsheets that can be simultaneously worked on.

The system will respond to overloading with fits of lags and display glitches, especially with multiple open tabs running in the foreground or with running apps that are not matched by their operational requirements in terms of memory and storage, or even the operating system.

On the flip side, the power draw of the processor is very passable, with a TDP of 6 watts, the Samsung Chromebook  3 G5XE501 and the Acer Aspire 5 ES can attest to the benefits of having such tolerable battery implications.

The Asus Chromebook C202S is primarily designed to meet the needs of people in the education niche market, from Junior school up to higher institutions of learning.

This device gets all the niceties of a typical Chromebook such as an enduring battery, and a trim design, and then it goes a notch further with a host of extra effects. This Chromebook Flip review would be worth reading also.

Whether you accidentally lose hold of its grippy build or spill liquid on its handy keyboard, this Chromebook will come out largely unscathed. And when it gets down to business, there is enough battery power and just enough processing power to last from the classroom to the office.