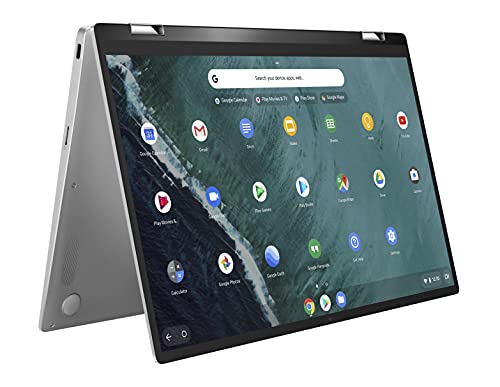 Asus is no stranger to the burgeoning Chromebook market, and with the Chromebook Flip C434, a convertible that is priced in the midrange belt, they make further inroads into the world of the competitively priced, casual use and the Chrome OS.

This Chromebook is a looker and a doer. The aesthetics are pleasing, the display is bright and the Nano Edge bezels are thin, while the top-quality build will not flinch as the hinges flip the display between four viewing modes with flippant ease.

Under the hood, the backlit keyboard is an ergonomics draw, and under the keyboard deck, the Core i3-8100Y CPU will waltz through all your office productivity tasks without making a scene or significantly straining the equally impressive battery.

The build of this Chromebook features a fuse of fancy and function, the chassis sports a silvery-colored exterior that accentuates its sturdy and strictly aluminum build. While the chamfered edges are marked out with the luster of chrome, as are the hinges.

Weighing in at 2.9 pounds and trimming down to about 0.7-inches at its thinnest side, this Chromebook perches on the fringes of portability and maintains a robust profile still.

Then there are the hinges, or ErgoLift hinges as they are so named, sturdy to the point of stiff, but flexible enough to allow a 360-degree rotation for a variety of handling and display forms.

By tilting the display and keyboard deck on either side of the hinges in a typical convertible fashion, this Chromebook can transform into four viewing modes- clamshell, tent, media, and tablet.

In normal laptop mode, the hinges prop up the keyboard deck with an uplift that sets it up for a more enjoyable and flex-free typing experience, the audio will also slightly benefit from this lift as there is ample space under the carriage for the sounds to pan out.

But the stereo speakers are also sited under the keyboard carriage; downward-firing, a position of relative disadvantage, and that is despite the best efforts of the drop-leaf flexible ErgoHinge.

By Chromebook standards, the Asus Chromebook flip gets a fair port collection, the highlight being two USB-C ports for charging the Chromebook or connecting to devices and external displays among other things.

It also gets a USB-A port, a 3.5mm audio jack, and a micro SD slot for additional storage support.

On the aspect of wireless connectivity, Wi-Fi 5 (802.11ac) is on hand to provide strong and steady signals as well as snappy data-transmission rates for everyone that plugs in.

The keyboard and trackpad design employed here is everything you’ll ever want from a Chromebook bar a few.

From the five levels of backlighting to the 1.4mm of key travel, this chiclet-style keyboard keeps you on your fingers. The keys are flat, responsive, and press with moderate actuation, making for a comfortable typing experience.

The trackpad is equally impressive. It is generously sized, extra sensitive, and gets multi-touch gesture support as well as palm rejection, there is precision control over cursor movements and accuracy over clicks and swipes.

Then there is a touchscreen that you’ll really appreciate while using this device in tablet mode. It is replete with touchpoints across the entirety of its screen, and all your taps and swipes will not leave the slightest tinge of color trails in their wake.

The only caveat with this input ensemble shows up in brightly lit areas, the silver outline on the keys is difficult to see with backlighting, and the glossy screen will also pose its own visibility challenge in outdoor areas. But it is nothing that can not be handled by adjusting the level of backlighting or screen brightness.

Audio is not this Chromebooks strongest suit. The stereo speakers are downward-firing, and despite the best efforts of the generously sized resonant chambers to deliver what Asus touts as high-fidelity audio, the sounds will only suffice for movies and music.

The sounds are still decent, the bass is passable, but the volume is not remarkable even at its highest level.

The 1920 x 1080 display of the 14-inch screen is as crisp and vibrant as Full HD can be, and the IPS panel employed here provides for a host of viewing angles, this is pretty decent specs for a Chromebook.

With an aspect ratio of 16:9 and a treat of small-sized bezel surround (5mm on all sides), there is sufficient screen real-estate for binge-streaming all your favorite shows or playing a score of casual games for that matter. There is also a webcam that is smuggled into the refreshingly trim top bezels, it is not exactly a breath of fresh air, but it will still suffice for the occasional zoom calls and meetings.

The screen does appear horizontal, more likely to bottom out over the scrolls of web browsing than the stream of moving images, but the short-of-sharp contrast level and uneven brightness might put a little damper on the display, just a wee bit.

Still, there is not much to complain about the quality of display that is served, throw in an average 93% coverage of the sRGB color gamut as per colorimeter tests, and you get a good deal.

The low-end Intel UHD Graphics 615 is saddled with the responsibility of churning out graphics and it delivers to the best of its abilities, which is unfortunately or unsurprisingly not too impressive.

It does have the capacity to reach speeds of up to 900MHz, which is just enough for regular photo editing and the occasional light gaming.

It is not a dedicated GPU, so there is only so much that it can do.

This laptop is not remotely close to being suited for gaming as the processors and the Chrome OS are not wired for the grind.

It is not all gloomy though, with a steady internet connection, this Chromebook, like others, can access a wide range of device-compatible games over the Chrome web and the Android Playstore.

There you’ll find a decent number of titles that can run at steady frame rates and display resolutions that this Chromebook can allow.

You might not get to climb the snowy Mountains with Lara Croft or blow up tanks on Battleground, but you can still wreak havoc on the demons of Doom Eternal, fair deal.

There is enough juice in this battery to take you through 10 hours of everyday system tasks like video playback and word processing. The battery runtimes are helped by the tolerable power draw of the devices’ components, none so much as the CPU and its integrated graphics card.

While you can always buy more time by lowering the brightness levels of the display and the keyboard backlight, or opt for a couple of other power-saving measures, this Chromebook still offers enough for a good day’s job on a single charge.

As there is no mechanical drive inside its carriage with provision for a fan design, this Chromebook resorts to a system of passive cooling, and it serves to keep the heat at bay and the noise away. The risk of overheating with this laptop is very minimal, the processors on board are very energy efficient and the heat that they produce at the peak of their powers will only scratch the surface.

While you can certainly not expect too much power from a Chromebook, this is no get-out-of-jail-free card, and Asus seems to get the memo.

You can get down to business with the base processor on offer, the Core m3-8100Y dual-core processor, or opt for more powerful configurations with Core i5-8200Y.

What you get with this Chromebook in its base CPU is a device that can comfortably power through everyday computing and office productivity tasks.

Any attempt to push this Chromebook beyond its limits by opening a ton of chrome tabs while simultaneously running a couple of Android apps will be met with a brick wall of time lags and display stuttering. It is your cue to lower the load or run the risk of a complete system fiasco, the multitasking circuit is not necessarily a tightrope with this device, as long as you don’t stretch it overly.

The Amber Lake generation Core m3-8100Y processor is classed as low-end, it works just fine on the Asus imagine book 14″, but it might not measure up to the Core i3-8130U processor in the Dell Chromebook 14, the HP Chromebook x360 14, or the Acer 714 14-inch Chromebook. It does get two cores and a turbo speed of 3.4 GHz to work with, alongside a lenient TDP of 5 watts and a placid running operation under the hood of its host Chromebook.

The Asus Chromebook Flip is priced at the midrange spectrum, and it delivers returns that are fair to middling at worst, but at its best, this Chromebook can be quite the catch.

It strikes the right chord with its eye-catching aesthetics and durable design, and also strikes a balance with a satisfactory system performance that can break through the average Chromebook benchmarks.

The thin screen bezels are always welcome, as is the cool and quiet operating conduct, and the display to an extent, but there is still a lot of room for improvement.