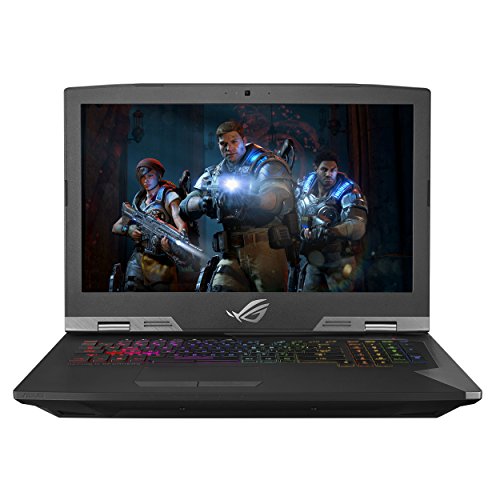 The Asus ROG G703 is an expensively priced 17.3-inch gaming laptop with the sheer size and power of a juggernaut and a rafter packed full of impressive features.

Its processors are a powerful workforce while the 144 Hz, Full HD resolution display on an IPS panel is smooth and vibrant.

And when the Per-Key RGB LED backlighting takes center stage on the keyboard during gaming, the stage is set for a thoroughly immersive and thrilling gaming experience.

The weak battery pops up with a harsh reality check and the fans have a mind of their own. But these potential deal breakers are offset by plenty of other highlights that give this laptop an irresistible appeal.

With its massive weight and thick profile, the G703 does not attempt to be svelte or stylish at first glance. Still, it is hard to pick out any harsh words from its opening fashion statement, what with a brushed aluminum lid that sports the ROG logo in all of its RGB LED illuminated glory.

Flip the lid or rather, twist it and you might spot a trace of flex that is evidenced in the whiff of a creak. And when you get a feel of the sturdily plastic keyboard deck, you get the impression that it is fully prepared for all the rigors and revelry of gaming.

The laptop also maximizes the strengths of its bulky build. At the rear edge of the deck, two large vents line out on either side of an array of ports and connections with a couple more of such vents sited on either side of the keyboard deck.

And with a weight of 10.35 pounds alongside a thickness of 2 inches, this laptop is flat-out beefy. But this hulking heft and headroom are seemingly justified by the sheer quality of hardware and components that feature inside this laptop.

By siting four of its most regularly used ports at the rear edge-two power DC input ports and two display ports (HDMI and Mini-Display port), Asus leverages the extra space at other places to accommodate a healthy number of other useful provisions.

This laptop can boast four USB-3.0 ports, one of which incorporates a Thunderbolt-3 port. Here you can also find an RJ45 port, a card reader, and a Kensington lock along with two audio ports for the microphone jack and audio jack(Headphone and microphone combo).

Online gamers can count on the impressive 2.5 Gbps speed of the resident Ethernet connection as well as the 1.7 Gbps data transfer rates of the Gigabit wave 2 802.11ac Wi-Fi for a steady and far-reaching wireless Internet connection.

As keyboards take more prominent roles in gaming laptops priced around 1500, Asus pulls all the stops to deliver a keyboard that will come out unscathed from the furious and quick-fire pounding of intense gaming sessions.

Although this is not a mechanical keyboard as with the Razer Blade Pro 17 or the Gigabyte’s Aorus 17, it is no less robust and is well shored up across its base to withstand continuous impact.

The chiclet keyboard features keys that are well-sized and well-built, with a significant travel distance of 2.5mm and feedback that can be heard within earshot.

The highlight of this keyboard is the Per key RGB backlight and its exhibition of stunning lights that will create an amazing scene during gameplay.

And with the provision for customizing the backlight color for individual keys, gamers can assign different colors to gameplay-specific keys so as to make them easily identifiable from the glut of colors.

As for the touchpad, it gets a smooth surface that sports two integrated mouse buttons at its bottom for right-clicking and left-clicking.

The buttons are very soft to the touch and pretty quick, although they could do with a little more precision.

And with its multitouch support to boot, you can prompt an array of shortcut provisions for designated system apps and programs with a simple sleight of two-fingers gesture.

This laptop is equipped with four electronic speakers to provide for high-frequency and low-frequency sounds in equal measure, along with a decent supply of depth, volume, and a bit of bass.

The audio department also gets help from the Sonic Studio III, with its impressive surround-sound signal that is perfectly suited for gaming.

With this audio processing software, gamers can revel in the sound of the action by choosing from five customized audio modes to match the game type.

You can almost tell from which side of the screen the action is coming from through the use of in-game sound hints that offer some sort of stereo split across all directions.

The G703 gets a lot of things going right with its display. While the IPS panel guarantees you a generous range of viewing angles with sufficient clarity and contrast, a brightness level of about 275 nits will bode well for outdoor use.

Its refresh rate of 144Hz and response time of 3ms will allow for seamless transition of slides and frames for all your media consumption and gaming, especially with online gaming.

Its coverage of the color space will also go down well with the entertainment needs and enterprise of creatives. With a coverage just north of 90% for the sRGB gamut, this laptop will create striking imagery that will improve the visual aesthetics of your gameplay. While a 60% value for Adobe RGB places this laptop as a halfway decent multimedia editing tool.

For a dedicated gaming laptop, the G703 employs the service of NVIDIA’S GeForce GTX 1080 graphics card and it is a good fit.

Although this card may be overshadowed by the extra muscle in its ray tracing RTX counterparts, it still packs in the punches to deliver some truly spectacular returns.

And when you combine its 8GB of VRAM with this laptops’ 32GB DDR4 RAM and its sufficient storage provisions, it presents the G703 with more than enough power to cut through some of the most intensive games and graphics demanding tasks.

For the bulk of your creative endeavors like photo editing and video transcoding, this laptop is just as effective at doing a good job of it as it would with high-end gaming.

As the G703 is primarily a gaming laptop, it gets a rich fill of ammunition and an army of provisions to deliver an immersive gaming experience.

For starters, the GPU is in a good place with its 8GB of VRAM and a capacity to overclock by up to 100MHz. This sheer amount of power will come in handy when you’re making a go for the latest AAA games and other demanding titles.

At its native 1080p resolution, this laptop will comfortably play taxing games like Far Cry 5, Assassin’s Creed Odyssey, and even The Witcher 3 at frame rates hovering around the 100fps orbit, even on high graphics settings. This is probably helped in no small part by the impressive 144Hz screen refresh rate and the capacity to turn up the dial with the G-SYNC platform-one of several strings in this laptops’ bow.

Admittedly, the frame rates will drop when you plug into VR headsets and 4K monitors for demanding games like Fallout and Battlefield respectively. But a lot of other games will play out nicely on this laptop without a trace of lags and stutter.

As it is almost always convenient to flip the ” it is a gaming laptop ” narrative as a get-out-of-jail-free card whenever the question of their flimsy battery arises, the battery in this gaming rig only further begs the question.

Even with a host of drastic concessions and power cutting measures in place, like a dial down in graphic settings and screen brightness, the battery will exhaust all of its gas before the 3-hour mark-and that is while idling.

And if you engage in regular computing activities like Youtube over Wi-fi or some significant word processing tasks, this laptop will call it a day around a meager 2 hours of operation.

However, there is one more trick to employ if you are willing to go the extra mile to squeeze out some more juice from this battery.

You’ll then have to give up the gameplay-enhancing powers of NVIDIA G-SYNC by setting the GPU mode of the ROG gaming center software to the power saving ”Optimus mode”.

The heat that is mostly generated from the processors at the thick of computing activity is driven out by the fans through a quartet of vents sited across all but the front edge of the keyboard deck. Dust and dirt particles are also expelled from the system through copper channels installed at the periphery of the fans.

The result is a laptop that is almost always cool and comfortable to use, especially around parts like the wrist rest and the undercarriage which frequently come in contact with body parts.

The caveat lies with the occasional erratic behavior of the fans. While they wind up as most fans do during intense workload, they also go into full swing at regular system activities like booting up and running updates.

Still, the noise that is generated will fly just below the radar for most of the time.

The G703 was designed to be great at gaming and so it puts its best foot forward with the powerful 8th Gen core i9-8950HK processor in addition to a GeForce GTX 1080 GPU.

These processors are armed with more than enough power to take on the most demanding apps and games. And with the capacity to overclock at the peak of their powers, they will give this laptop an edge over the most intensive exertions and the fiercest competition.

With a six-core processor pulling the strings inside this laptop and 32GB of RAM joining the fray, the G703 is well stocked in the firepower department.

And when you call on the powers of NVIDIA’s G-Sync Technology or activate the “ Armory Crate” software, this laptop will launch an offensive against some of the biggest names on the gaming roster.

The Asus ROG G703 is a solid gaming rig (also see our Asus Rog Zephyrus Duo review) that is equipped with powerful processors and a couple of top-drawer hardware components.

With its 8th generation core i9 CPU joining forces with Nvidia’s GTX1080 Graphics card and a 144Hz HD Screen with G-Sync Technology, this laptop will breeze past a majority of the biggest titles in the gaming sphere.

If you can look beyond the imposing build and an equally imposing price tag, along with a grossly underpowered battery, there is a lot of value to be found in this laptop.