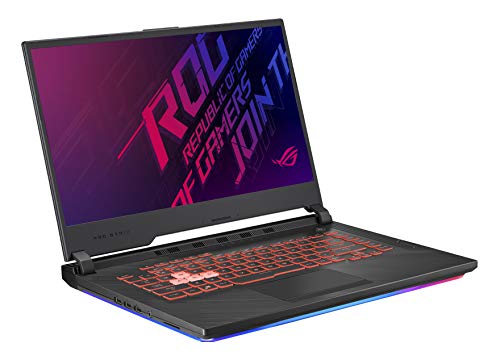 The ROG Strix G pushes and shoves its way through the throng of gaming laptops and into mainstream reckoning with its 9th generation core i7 processor, a couple of graphic card configurations that can go the distance, and most importantly, a relatively attractive price tag.

This laptop strikes the right chord with folks looking to strike gold on a strict budget as far as gaming laptops go.

There is enough power here to run several high-end games and to create content that will catch the eye. The absence of a webcam means that you’ll probably keep all your gaming exploits to yourself, while the fan noise is disturbing and the battery descent is drastic during gaming. But this is a gaming laptop, after all, so we can cut it some slack.

Asus touts a collaborative effort with BMW Designworks Group as the brains and brawns behind this laptops’ build design. This fusion of ideas rubs off quite nicely on the ROG Strix G, as evidenced by the aggressive yet striking aura that it gives off at first blush.

While two portions of brushed finishing stretch out straight and slant at the exterior, the dominant theme that surfaces on opening the lid is a uniform pitch-black color and a small stack of ridges at vantage points. All of the edges are lined with a strip of glowing LED panels that give the laptop a certain kind of chic, and the bottom is rigged with a slew of trim grills that serve as pockets of ventilation.

The laptop can be opened using one hand with the help of a small lip at the front of the lid, and the hinges do not offer any sort of resistance when they are set into motion.

Overall, the ROG Strix G gets a build that is robust in all the right places, and its significant weight is seemingly offset by a compact frame.

By siting all its ports at the back and the left-hand side of the keyboard deck, Asus frees up extra navigable space at the right side of this laptop. At the back, an HDMI 2.0 port is joined by a Gigabit RJ-45 and an AC adapter plug, with extra provision for an optional USB Type-C 3.1 (Gen. 2) connection. While the left side houses three USB 3.0 ports and a 3.5mm audio jack.

The absence of the Thunderbolt port and a USB Type-C port will form some of the major takeaways from this port lineup, as is the omission of an SD card reader.

Wireless connectivity is taken care of by a Wave 2 Gigabit Wi-Fi 5 and Bluetooth 5.0.

The Keyboard ensemble features a front row of dedicated keys, a uniquely shaped space bar, small cursor keys, and the transparent white-colored WASD zone keys as some of its key highlights. A vertical row of special keys also files out just below the power button, while the NumPad is domiciled in the touchpad. The keys hit the deck against a travel distance of 2mm, and although they feel a little squishy to the touch, they are no less solid. And with the N Key rollover technology to account for their durability, the keys will thrive under the consistent crunching of gaming exertions.

The touchpad is smooth and sensitive, with integrated mouse buttons for right and left clicking at its bottom. It also incorporates a NumPad in its design that is triggered by long-pressing on the upper right corner of its surface, and it gets a smattering of LED panels to highlight all the lines and crossings. Very few people will complain about the precision and prompt with which it operates.

The speakers on this laptop will not blow you away, neither will they blow chunks when they start firing. They are sited just below the wraparound strip of LED lighting at the keyboard and so they get some much-needed clearance to make sufficient impact.

If you primarily use this laptop for media consumption, then you will not be disappointed with the audio output. But as this is a gaming laptop, chances are that you might miss out on the subtle traces of in-game sound cues that spice up the gaming experience if you do not pay rapt attention. And when you factor in the occasional racket from the fans, your best option will be to make a beeline for your headphones.

What these specifications translate to is a visual output that meets the accepted standards in clarity and diversity of viewing angles. Multiplayer games can ensue with split-screen or off-center viewpoints and still pack a punch, while the Netflix-ers and YouTubers will binge on the vibrant visuals that turn out. The high refresh rate of the screen also makes for smooth gameplay that will keep online gamers glued to the screen.

And with all but the bottom edge of the screen sporting relatively trim bezels that account for a decent 80% screen-to-body ratio, there is bigger screen real-estate to feed off.

The major drawbacks with this laptops’ display show up in its reduced visibility in outdoor spaces and with the lack of color accuracy and fidelity. In places with a significant degree of exposure to sunlight or other intense light sources, the screen might become a little hazy and the colors a bit faded despite the best efforts of the matte finish to screen out the blur. And creative professionals looking to get down to their business will feel a little hard done by the screen’s sub-par coverage of the color gamut in the Adobe and RGB spectrum.

But without the Pantone validity and G-Sync compatibility that adorns the screens of higher-end laptops in the ROG lineup, this one still turns out fine for gaming first, among other things.

With the ROG Strix G, gamers are spoilt for choice between a host of laptop configurations with a strong selection of GPU options, some may prefer the ROG Strix Scar II. The field of options ranges from the base configuration with the GTX 1650 graphics card to the GTX 1660 Ti, the higher-end RTX 2060, and lastly, the RTX 2070 card which puts a premium on the laptop.

Our review laptop comes equipped with the GTX 1650 graphics card, a budget option that is by and large a very decent GPU that meets the basic requirements for gaming and serious graphics work.

With a VRAM of 4GB GDDR5 and a boost clock of 1665MHz on this graphics card, the laptop will easily process a host of graphic design tasks that do not call for ray tracing or the application of tensor cores.

You can still engage in smooth-running photo-editing and video transcoding tasks, and then hit 60fps at 1080p in most games.

With an array of some of NVIDIA’s finest processors to choose from, gamers can go for the basics or the spectacular, with the assurance of a thoroughly thrilling gaming experience, albeit in varying degrees.

For the best gaming experience, gamers can activate the Aura Sync platform to match the RGB lighting scheme of the keyboard and the wraparound strip at the edges with their compatible gaming peripherals; like headsets or a gaming mouse.

Many of the most popular titles in the gaming scene like The Witcher 3 and The Shadow of the Tomb Raider can run on this laptop at decent frame rates and its native resolution. A host of other mainstream games like Far Cry New Dawn, Rage 2, and Grand Theft Auto V will play at frame rates north of 50 fps in that order.

By gaming laptop standard, the runtimes posted by this laptop are regular as clockwork, especially with computing activities aside from gaming. While it will last for nearly 5 hrs of Web browsing and video playback, gaming takes quite the toll on the battery.

Its 48Wh battery reserve can only suffice for a maximum of 3.5 hours of gaming or other demanding workloads.

On the flip side, it takes about 1.5 hours to reach full charge from zero, and you can always tweak some of the system settings to buy more time.

From the litter of air vents that fan out at the bottom to the provision of dual 12V fans, the ROG Strix G does its homework on the subject of cooling. And with Asus anti-dust technology pulling the strings, the fans also double as a channel through which just and dirt particles are driven away from the interior.

Still, the average system temperature hovers around the range that is considered to be passable.

As the base model comes equipped with a 256GB SSD and 1TB SSHD, along with 16GB of DDR4 RAM, the ROG Strix G gets the basics right. Step in a 9th generation Core-i7 9750H processor and you get more than enough power to drive this laptop in any direction. The waiting times that come with booting up have been drastically cut down, while system apps and programs launch with prompt. This laptop will take on run-of-the-mill tasks like word processing, web browsing, and video playback without breaking a sweat.

And when you get down to serious computing activities, the powers of six cores join forces to reach a turbo boost of up to 4.5 GHz, which is just about enough pedal to the metal for any intensity of workload.

Multitasking is also a strong point of this laptop. With tons of chrome tabs joined by a couple of spreadsheets in the background, the Strix G will still smoothly play Full HD videos on the home screen, all in one fell swoop. With extra workload, the glitches may creep in on the display in blink-and-you-miss-it appearances, your cue to lower the cargo or risk a tipping point debacle at the end of its tethers.

Armed with powerful processors, a RAM of 16GB, and sufficient base storage capacity, the Asus ROG Strix G hits the sweet spot in the gaming circles.

And as it is priced in the budget class of gaming laptops around 600, it offers gamers an even more compelling case for purchase.

The build is sturdy and the design is striking, while its 15.6″ display will make the cut for a thrilling view. Throw in a robust thermal design and the cluster of RGB lighting points and you get a proper gaming rig, rigged in all the right places.

The battery is still a worrying concern during gaming and the omission of a Thunderbolt port, SD card reader, and webcam will divide opinions across the board. But all of these tradeoffs pale in comparison to the ultimate payoff…the ultimate gaming experience, or something distinctly related to it.