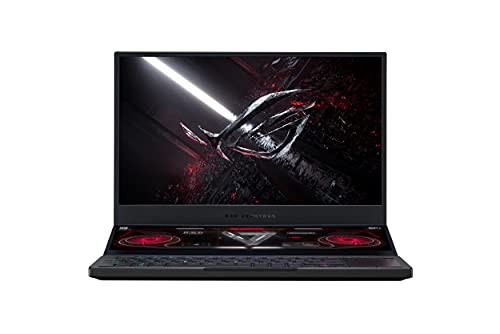 All good things come in twos, and the Asus ROG Zephyrus Duo, with its brilliant dual-screen setup and powerful processor combination, puts the click on this cliché.

The hardware is tailor-made for a thrilling gaming experience, with the octa-core Core-i9-10980HK CPU and a GeForce RTX 2080 Super graphics card occupying the front row, next to the main Ultra HD display and a secondary display.

Elsewhere, the software is equally hardwired to enthral. With Aura Sync for lights and effects, G-Sync for seamless visuals, and Armory crate, summing up to create the perfect stage for gaming.

There is something in it for the creatives too, and for other professionals that will take advantage of the power-packed processors, a robust port lineup and an effective connectivity suite.

A gray metal case is used to frame this laptop, there are no bells and whistles here, so it will not catch your eye at any turn. The chassis feels very nearly robust, and when you flip the lid open, it will only ever give the slightest hint of a flex problem.

And as it allows opening up to the 130-degree mark, the hinges get a material strength that will firmly pivot and support the lid in any chosen viewing angle. The ScreenPad deserves a mention of its own, the tilt of the hinges provides it with an uplift that permits increased airflow into the case, while still making for enhanced viewability.

Its weight of 5.51 pounds is quite a handful to be lugged about and coupled with its significant physical dimensions, it is not exactly a laptop that should stay long in your hands or away from your desks. Overall, the build quality of this laptop meets and even tops the minimum standards for gaming laptops in vigor, heft, and size.

With the USB Type-C(with Thunderbolt 3)firmly nestled at the left edge of this laptop, you can connect to multiple display monitors, transfer files to and from the laptop with lightning speed and charge this laptop on the go. Three USB-A ports, an HDMI port, a power port, along with jacks for the microphone and headphones complete the lineup.

While wired connectivity is handled by a Gigabit Ethernet port, A Wi-Fi 6 (AX201) chip and Bluetooth 5 provision take up the responsibility of providing wireless connectivity. And you can always count on the impressive speed of transfer and the extensive range of coverage with which they both operate.

The keys in this RGB backlit, chiclet keyboard are smooth and flat, their brief distance of travel and ease of key press make for crisp and comfortable typing. And it gets an enduring keyboard that will not buckle or flex under the pressure of pounding that ensues as you flex your fingers and gaming muscles on it.

Asus manages to fit a six-row keyboard into a scanty keyboard deck that inevitably has to be stripped of a wrist rest and a physical NumPad, a big compromise that stems from the provision of the ScreenPad. A rubberized wrist rest is included in the purchase package to make amends, although it will require extra desk space to be of any practical use, and you can as well write off using it with this laptop placed on your lap.

As for the touchpad, it is relocated to the extreme right of the keyboard where it sports a footprint that feels very horizontally cramped. It will throw up a Numpad at the press of a special key and is also outfitted with two dedicated mouse buttons for good measure. The keys are firm and clicky, with a keystroke that seems to fire off at the scent of your fingers and bottom out in a snap. Its surface is thankfully very smooth, and with multi-touch gesture support to boot, there is improved ease of navigation and handling

At the front corner region underneath this laptop, the stereo speakers can be found. What they lack in the substance of bass, they more than make up for in the extent of their reach. And while the high volume is undoubtedly the highlight of the audio setup, the highs and the lows will be soundly perceived at range. Overall, the sounds that are delivered can still be cut out for all your entertainment needs.

Much like the Zenbook Pro Duo UX81 and even better, the dual-screen setup in this laptop is the center of attention from the get-go. The main screen, with a whopping 3840 x 2160 pixels for native resolution and a host of added features for extra effects, will steal the show as soon as the curtains are raised.

The IPS panel on this 15.6″ screen accounts for its wide range of viewing angles. While its G-Sync compatibility and 3ms GTG response time provide for a smooth transition of frames and visuals for a flicker-free and ghost-free display.

Throw in a Pantone validation and a 100% coverage of the AdobeRGB gamut and you get a canvas of a screen that creative professionals will relish. And with a brightness of 385 cd/m² on top of a matte screen finish, this laptop will not look out of place in outdoor surroundings.

With a matte screen finish and a 3840×1100 pixels resolution, the secondary display, known as the ScreenPad is not too far behind in terms of quality. It is the perfect complement for the main display, although it is more than capable of operating on its own.

With an outstretched arm to take up any spillovers or side attractions from the main panel, it can be used to take on chats, jot down notes, or switch between songs in your playlist while you do more serious work with the main screen. And as its hinge mechanism props it up at both ends, it is well set up for easy utility and improved visibility.

Our review model of the Asus ROG Zephyrus duo is equipped with the NVIDIA GeForce RTX 2080 Super graphics card, a high-end GPU by every right.

This graphics powerhouse is armed with a copious amount of shaders, mappers, and CUDA cores, and can reach clock speeds of up to 1815 MHz with a VRAM of 8 GB GDDR6.

And when you set the power profile in the Armoury Crate software to turbo mode, the graphic performance will get a boost, for as long as the system temperature and energy consumption do not exceed their tolerance limits.

With a powerful GPU in its NVIDIA GeForce RTX 2080 Super graphics card, the ROG Zephyrus is in its element when it comes to gaming.

And with Ray tracing as its superpower, it will take on the biggest titles in gameland. The Shadow of the Tomb Raider, for example, will play very smoothly at frame rates upwards of 85 fps, even at Ultra HD resolution.

Other games in the big leagues, such as The Witcher 3, Control, and Wolfenstein will also run at more than decent frame rates and Ultra HD resolution, albeit with a bit of meddling in the system settings.

There is the promise of more at Full HD, and with the high refresh rates and response time of the G-Sync compatible 15.6″ display, the gameplay is seamless and snappy.

Throw in a secondary display in the form of a ScreenPad with which you can engage with others in the online gaming community on Discord, or even do more with dual-screen leverage, as with Civilization VI, and you get the clincher.

Battery life is not remotely a strong suit of this laptop, especially with the massive power draw of two power guzzling display panels, joined by a couple of powerful processors in the feeding chain.

This laptop will draw the curtains on a session of wireless web browsing at a little above 3 hours, while video playback should last for around two hours more.

As expected, gaming will put a significant strain on this laptop, you’ll be lucky to squeeze out more than one and a half hours of juice from it. You can set the system to battery saving mode, or engage the Armory crate control panel to choose between four power profiles (“Quiet”, “Performance”, “Manual”, “Windows”) to get more from the battery.

If you’re a heavy hitter with games, in the mold of The Shadow of the Tomb Raider or the Witcher 3, then it’s probably best to keep this laptop at arm’s length. The bottom can get quite uncomfortable under the pressure of intense workload, and that is despite the best efforts of the AAS Plus cooling system employed in this laptop.

This proprietary technology is armed with five heat pipes, four heatsinks, and a 28.5mm vent, along with a thermal paste known as Liquid Metal, all of which join forces to cool the system. It also incorporates an anti-dust channel that serves to deter dust and dirt particles from flooding the chassis or clogging the fans. As for the fans, they stay silent while the system is idling and then whip up a frenzy at the thick of intense gaming action.

Powered by an 8- core Core i9-10980HK (Comet Lake) CPU with a base speed of 2.4GHz and a capacity to overclock, the Asus ROG Zephyrus Duo is much more than just a gaming monster. With 32GB of RAM and 1TB of storage to draw from, this laptop will not look out of place in a workspace setting, what with its generous port outlay, impressive color calibration, and powerful processors to call on.

Whether you are crunching through spreadsheets on the main display, applying special effects on your images with photoshop, or doing both at the same time with the help of the ScreenPad, this laptop will take it all in. You can take notes on the screenPad while streaming videos on the main screen and loading a pile of web pages all at the same time, and the laptop will not yield. Several other workflow combinations will take advantage of the dual-screen setup and the workstation processor to achieve even more productive output. If you’re one to frequently multitask, then this laptop will fit the bill for you, whether in work or play.

The Asus ROG Zephyrus is a breath of fresh air for those who will spare no expense to get the best out of their gaming experience. The lack of a wrist rest and a physical NumPad rank among the biggest concessions, while the heft of the build and the din of the fans can not be helped. It’s a relatively small price that is paid for the whole package, and that is before you even consider the huge price that you get to pay in exchange for the laptop itself.

While the dual-screen setup is undoubtedly its biggest highlight, there are a couple of other features in the hardware and software ensemble that will be of particular interest to gamers and creatives alike.

The Thunderbolt, for one, is a useful addition, as are the gaming peripherals that it ships with( ROG Delta headset and ROG Gladius II Impact gaming mouse). There is also an external wrist rest and a ROG Eye GC21 webcam to make up for their outright omissions, and a second AC adapter to keep your device continually powered on the go.

As soon as you get accustomed to the lack of a wrist rest, the unusual placement of the touchpad, and the noise of the fans, then you can settle down to a dose of powerful performance, stunning displays, and a thoroughly immersive gaming experience.