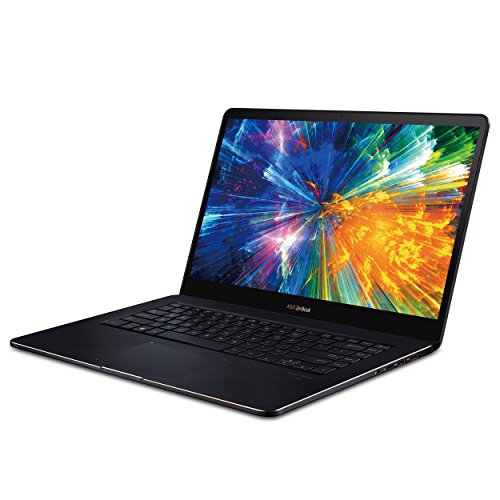 The Asus Zenbook pro’s 4k display is undoubtedly the star of the show, but another screen (it’s a touchpad in reality and Asus aptly calls it a ScreenPad) runs it pretty close. There are still some teething problems with the ScreenPad, and some of its functions do not work as seamlessly as they should. But if Asus manages to fix these issues, they could be on to something spectacular. We certainly like the idea.

Everything else about the Zenbook Pro is spot on, with the possible exception of its battery. This supercharged laptop looks as good as an art exhibition, yet it’s also fully capable of rolling up its sleeves and getting to work when you need it to. With fantastic internals to go with its polished exterior, the Zenbook pro 14 makes you want to flourish it out at every opportunity.

Costing north of $2000, the Zenbook Pro is certainly not cheap. Nevertheless, it offers exceptional bang for your buck, and other laptops in its category cost significantly more, leaving the Zenbook Pro in the somewhat weird position of looking like a bargain, even at its price.

Asus has always had a knack for giving even their budget sub $600 laptops svelte looks, and the Zenbook Pro, which has a premium tag, sports a sophisticated and elegant look, as you might expect. The laptop’s forged aluminum chassis features an enchanting Deep Dive Blue hue, with gold accents around the edges. Asus’ trademark concentric swirls also make an appearance on the lid, although they are a little understated to let the Asus logo shine out like a beacon.

Underneath the lid, an island-style keyboard with chiclet keys spreads across the metal chassis. The ZenBook’s keyboard is pleasant, with exactly the correct amount of click, despite having only 1.1 millimeters of key travel. The keys are backlit and typing on the keyboard is pretty comfortable. A fingerprint scanner is situated right under the Harman Kardon logo, for quick Windows sign-ins.

Next up is the Zenbook Pro’s glass surface touchpad which is pretty decent on its own, even doubling as a numpad and offering a calculator app. All of these are useful, but the Zenbook Pro’s touchpad is defined by Asus’ nifty yet polarizing ScreenPad. The secondary touchscreen offers four modes: ScreenPad mode, Extension Display, Traditional Touchpad mode, and Touchpad Disable mode. The last two modes (particularly the last mode) are necessary because the touchpad stops working normally once it’s in the first two modes.

The ScreenPad mode lets you run several pre-installed apps and even customize the touchscreen with some of your favorite apps for access to them on the fly. Extension Display is the second option, and it’s exactly what it sounds like: an extension of the primary display. It’s almost as if you’d put a little external display into the laptop’s bottom.

There’s a decent offering of ports on both flanks of the Zenbook Pro, although these are just the ones you’d normally expect to find. On the left side, there’s a microSD card slot, and two USB 3.1 Gen 2 Type-A ports. Turn over to the other side and you’ll find two Thunderbolt 3 ports and an HDMI input.

The Zenbook Pro’s 15.6” LCD UHD 4K (4096 x 2160p) display is pretty eye-catching and is made all the more remarkable by the NanoEdge bezels that surround the screen. Images are rendered in clear detail and the screen itself is an explosion of color. The ZenBook Pro comes, like other Asus laptops, with the company’s Splendid tool that allows you to change the color temperature of the screen. You may pick from three presets: Normal, Eye Care, and Vivid, or manually control the temperature.

The Zenbook Pro can also recreate 140 percent of the sRGB color gamut and, at 330 nits, is pretty bright. Really bright lights may overshadow the screen, mind.

On the audio front, Asus says that the Zenbook Pro’s downward-facing speakers have been tuned with the assistance of Harman Kardon. The speakers are loud enough to surround a decent-sized room, and certainly loud enough for those conference calls. When playing music, the bass is a little iffy, even if other sounds are reproduced and differentiated clearly.

An Intel Core i7-8750HK processor, 16GB of RAM, and 512GB of SSD are heavyweight specs when they appear together and the Zenbook Pro is something of a powerlifter, steamrolling through general window tasks without even pausing for breath. That’s not all, the Zenbook Pro can handle tougher tasks such as video encoding and photo editing like a champion, too.

If multitasking was an Olympics sport, the Zenbook Pro would be a multiple gold winner. It can race through several open browser tabs, cycle through numerous running programs, and complete productive tasks in record time. In terms of performance, the Zenbook Pro leaves many of its competitors in the dust.

Although it’s not been designed primarily as a mid-range gaming laptop, the Zenbook Pro still packs an NVIDIA GeForce GTX 1050Ti GPU with 4GB of VRAM, enough to run some of the older, less intensive games comfortably. It’s still enough to run AAA titles as well, with a little clever tweaking. In a nutshell, the Zenbook Pro is a classy, well-rounded laptop, boasting enough power to leave even the most demanding of power-users satisfied.

The downside of having an all-metal chassis is that heat builds up pretty quickly on this laptop, and it does get uncomfortable after a while. The laptop’s dual-fan system battles gamely to keep temperatures down, succeeding to an extent.

The trade-off is that things get really noisy and unless you’re using headphones, it’s hard to get any joy from the laptop with such a racket going on. The laptop is the hottest at the bottom, so you may want to consider placing it on a table while doing anything tasking, rather than on your laps.

The Zenbook Pro is not an all-day laptop, unfortunately. It’s hard for it to be. The ScreenPad, along with its 4k display and Nvidia GeForce GPU put a lot of strain on the laptop’s battery, meaning that it’s only able to deliver about 5 hours runtime. Power saving measures such as disabling the ScreenPad, reducing the screen’s brightness, and dimming the lights will add a few extra hours of battery life.

The Zenbook Pro combines stunning looks with immense power and is offered at a price that can be considered an absolute steal. Though the ScreenPad divides opinions, it’s still a lovely bit of innovation that will likely catch on if the kinks are straightened out. The only legitimate grouse we have with this laptop is its short battery lifespan that forces us to go everywhere with an adapter while keeping our eyes peeled for power outlets.

Even that isn’t such an awful thing for us, considering how much we enjoy whipping out this laptop. It instantly grabs attention, as most stunners can, and with its formidable array of components, makes quick work of most tasks. All things considered, the Zenbook Pro is a top laptop and we don’t have any hesitation recommending it, as well as its sister, the Zenbook Pro Duo UX581.