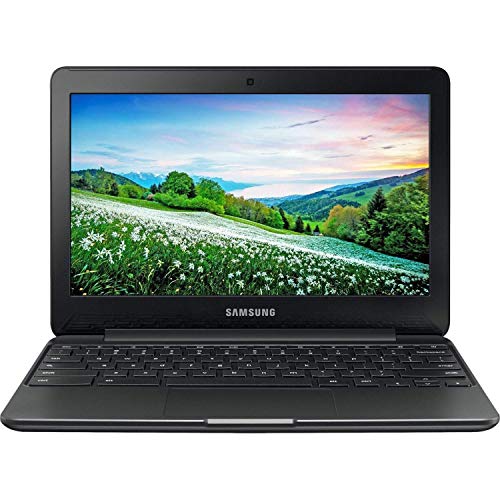 In the world of the Chrome OS, where prices are significantly lowered and computing performance takes a significant hit, the Samsung Chromebook 3 will put up a strong showing.

The processors have just the right amount of power and the 11.6″ display pops up with just about enough brightness. And then the 33Whr battery tops it with even more juice than you’ll probably need in a day.

It is weighed down by a couple of bugs, chief among which are speakers that are short on bass, a pretty basic port selection, and a keyboard that will take some getting used to.

All of these shortcomings pale significantly in comparison with the strength of the hardware that it assembles into a build that is quite low on headroom, and sturdy still.

And when you factor in the attractive price that it goes out for, the scales tip completely in its favor.

With a matte-black or matte-silver finish on a flat-out plastic build, the Samsung Chromebook 3 is furnished with looks that go from plain serious to pretty slick.

At the lid, the logo for Google Chrome and Samsung are the only highlights. And even though it is built entirely with plastic, it still feels quite as solid as it could have been with metal. It is pivoted by a hinge that is both robust and flexible in the places that matter, allowing for a rotation of up to the 180-degree mark.

And when it opens up, the 11.6″ display comes to the fore with a thick bezel surround. While the top bezel is host to a 720p HD webcam, the comparably thicker bottom bezel sports the Samsung logo. Just below that is the keyboard area that is cut from the same cloth as the lid, both in material makeup and in color profile.

And while it stretches almost entirely across the breadth of the deck, it remains very solid and even less susceptible to flex, despite its plastic build.

Weighing a very decent 2.5 pounds and measuring ‎11.4 x 8 x 0.7 inches, the Chromebook is portable enough to be grabbed by one hand, snug under an arm and lugged about with very minimal fuss.

Ports are in short supply here, with a USB 3.0 port and a USB 2.0 port on either side of the keyboard deck. Then there’s an HDMI port that can be used to output to external monitors, and a microSD card slot that can take up all your media files.

This is in addition to a combo jack for the headphones and microphone.

Wi-Fi 5 and Bluetooth 4.0 are on Internet connectivity duties.

The chiclet keyboard sports keys that are sizable and relatively short, topped off with concave corners that tie in with your fingers. While the 1.2mm travel of the keys is a fraction short of ideal, the requisite actuation force, at 63 grams is more passable.

Another noteworthy mention is the location of the power key which is in close proximity to the backspace key, almost too close to call.

This will make for the inadvertent shutdown of the Chromebook, especially during typing sessions. It’s even more pronounced for those who are just coming to grips with the intricacies of the typical Chromebook keyboard layout.

The touchpad fares much better. It is very sensitive to the slightest of touches and your fingers will meet with little difficulty in gliding across its 3.9 x 2.2 inches coverage area.

The stereo speakers are mounted at the bottom of the deck, a position of relative disadvantage. Still, the sounds that proceed manage to turn out trumps, especially with the volume levels

You’ll hardly pick out a whiff of any sort of distortion at low or moderate volumes, it is at full blast that the caveat lies. The sounds go from being smooth and gratifying at low volumes to a tad tinny and grating at high volumes.

The 11.60-inch screen of this Chromebook is not nearly as well spec’d enough to deliver a brilliant display, but it somehow exceeds our not too lofty expectations. Even with a resolution of 1366 x 768 pixels, a 135 PPI tally, and a 63.1 percent coverage of the sRGB color gamut, it still manages to impress.

While the colors do not appear to be muted as expected, the viewing angles, while not particularly sweeping, are still as decent as you’ll get from a non-IPS panel display. And the brightness will make for a fine view, even in places exposed to external light sources.

The display will not reel out vibrant sparks and colors that seem to pop out of the screen. But it does just enough to catch the eye, whether you’re reading through word documents or watching HD videos.

You’ll find a webcam that delivers exactly what you’ll expect from a 720p HD webcam, modest visuals. The quality is just about enough to get by the occasional skype calls, with a smattering of incidents in the form of blurs or patches at worse.

With the Intel HD 400 graphic card in the driving seat, this Chromebook can only ever go as far as to do the basics in graphics processing. There’s not much in the way of shading units and mapping units in this GPU, as is mostly the case with integrated graphic units.

This much translates to a laptop that will meet with difficulty in processing any sort of serious graphic task, from applying filters and effects in photos to reaching halfway decent frame rates for the lightest of games.

You can always apply some textures and touches to your photos with Picmonkey or Picozu, or engage in more complex designs with Desygner. And gamers can always resort to the Google Play Store to choose from a glut of games, as long as they are compatible with the Chromebook.

However, your gameplay will have to endure through spurts of lag, a small price to pay if you’re willing to stretch this Chromebook to squeeze out some decent gaming from it.

For example, while sliding and backflipping through obstacles in Alto’s Odyssey, a fleeting lag might leave Alto in a crumpled heap by the time the dust settles. Or Even worse, Zombies could steal a march on you in Into the Dead as your screen stutters.

The lack of a touchscreen will pose some little challenges, like when you need to ink on Sketchport or toggle the onscreen controls that make gaming much easier, as with titles like Asphalt.

Battery life is the highlight of almost every single Chromebook in the market, and the Samsung Chromebook 4 does not buck the trend.

The battery will draw the curtains on a session of Wi-Fi browsing at just a little under 10 hours, about an hour short of the slated time as per Samsung.

It can deliver runtimes closer to the touted timeframe with less exacting workloads, or with spurts of idling interspersed with other stretches of web surfing or video playback. And when the Watthour tank is depleted, it will take about two hours to completely refill.

In the absence of fans to keep the heat in check, this laptop is only just let off the hook by the low TDP rating and the tolerable heat production rate of its Intel-based processors.

While the top parts of the deck will remain mostly unruffled, the bottom parts are a little more vulnerable. The laptops’ temperature scale could tip over the edge at the height of its computing exertions, as with HD video streaming or gaming.

Thankfully, the plastic build of the bottom chassis serves to lessen the impact of the slight warming up that is felt when you use the Chromebook on your laps.

The Samsung Chromebook 3 can pass for a well-oiled machine as it makes the most out of the Intel Celeron N3060 processor that it is equipped with. While the performance level will not shatter any Chromebook records, it will hold out quite well with the bulk of your regular computing endeavors.

It gets support from a RAM of 4GB and 32GB of eMMc flash storage, the bare minimum for what is the accepted Chromebook-standard performance requirements.

With routine tasks and commonly used apps, web browsing, Youtube and Spotify streams, along with every other app from the Google suite, the performance is smooth and seamless.

You can send emails with Gmail, pen down notes on Google docs, surf the web with Google Chrome, download from the Google Play Store, and upload your files to Google Drive, and the Chromebook will not trip. You can even simultaneously engage in two or three of the aforementioned tasks, and still, top up the tabs on the Chrome web to the tenfold mark.

Lags only ever surface when you multitask with a multitude of Chrome tabs, and things may take a turn for the worse with gaming in the mix.

The Samsung Chromebook 3 will hug the headline for its very affordable price from the get-go. And while the pricing is its major selling point, it is not a get-out-of-jail-free card to parade mediocre hardware, and the Chromebook gets the memo, thankfully. It packs in some decent hardware into a puny headroom and maintains a sturdy profile still.

From the battery, which is the obvious highlight, to the processors and a decent input ensemble, it offers a very impressive cast of components. This Chromebook will get along well with kids and college students, or others who need a second laptop with which they can do the very basics.

It’s not flawless, while the port selection is pretty meager, the display is not the most vibrant and the speakers will need a little more oomph. Still, this Chromebook perfectly matches the bang with the buck.