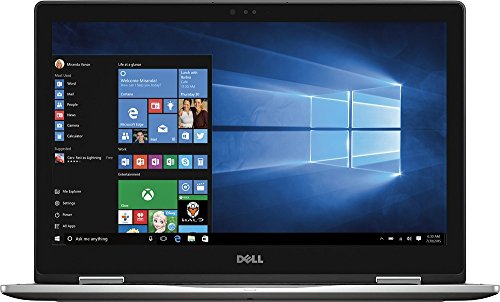 Laptops in Dell’s XPS range have obviously set the gold standard for style, performance, and power, often with eye-watering price tags to match. It is to the Inspiron 15 7000 2-in-1 laptop’s credit that you don’t feel like you’re missing out on much when you settle for it.

The Inspiron 15 7000 is a rung beneath a premium laptop, in that mysterious spot known as upper mid-range. For almost half the price of laptops in the premium range, the Dell Inspiron 15 7000 offers ample screen room, impressive performance, and flexibility in spades.

It’s not all smooth sailing, however. You’ll struggle to fit this 2-in-1 convertible in your hand when it’s in desktop mode, the keyboard and touchpad are not the best we’ve ever seen, and the fans tend to get loud and whiny when you ask the laptop to do some heavy lifting. Other than those, you’ll be getting a very reliable and durable machine that will do the vast majority of things you ask it to, and do them panache.

Dell offers the Inspiron 15 7000 in two versions. Both convertibles share a 15.3-inch screen and a 360-degree hinge in common, and that’s pretty much where the obvious similarities end. In terms of pricing and performance, both versions could not be further apart.

For one thing, the base model (which is our review model) sports a bright silver finish while the higher-priced and higher specced configuration (aptly called the Black Model) is, you guessed it, predominantly black. Moving on, the base model is loaded with an 11th Generation Intel “Tiger Lake” processor and 8GB of RAM. The Black Edition, on the other hand, boasts an Intel Core i7 processor and Iris Xe Max discrete graphics card. There’s also space on the chassis for a digital stylus.

Despite being made of plastic rather than metal, the underside panel and lid do not feel or appear any different. The lid flexes a little, but only if you twist it hard enough. The primary body of the gadget is protected by a metal chassis and a palm rest. Its two hinges allow the monitor to be rotated 360 degrees with little or no squeaks. Even if you fold the 7000 frequently, the hinges will most probably remain tight and shrug off abuse. By pulling the lid back beyond 90 degrees, the deck is raised by about 10mm and the typing angle is slightly improved.

The Inspiron 15 7000 weighs in at more than 4 lbs, making it a somewhat awkward ergonomic fit as a tablet. Having to constantly grip it tightly would wear out your hands in no time, so this convertible is better suited to a table.

The Inspiron 15 7000 offers the usual suspects, in terms of ports. A DC power socket, one full-size HDMI 2.0 output and two USB-A 3.2 ports are spread around the two sides, along with a USB-C connector that supports Thunderbolt 4, Power Delivery, and DisplayPort, and a 3.5mm audio jack. There’s also an SD card reader. However, it’s sluggish and half the card constantly protrudes, posing a constant risk of damage or loss.

The presence of Thunderbolt support and an SD card reader are welcome surprises, but an additional USB-C port would have come in handy. The laptop’s basic wifi configuration features 802.11ax (Wi-Fi 6) and Bluetooth 5.0 capability. This laptop does not offer LTE or 5G connectivity, which is a feature that is occasionally provided in laptops in this price range.

Number crunchers would undoubtedly be pleased to find that the Inspiron 15 7000 convertible offers a number pad, which has been steadily disappearing of late, even in 15-inch laptops. The tradeoff is that the rest of the keys on the island-style keyboard feel cramped together, to make room for the number pad on the laptop’s chassis.

As you can imagine, typing on this keyboard is not a very enjoyable experience, despite the fact that the keys offer a decent amount of travel. Further down, the laptop’s clickable, buttonless touchpad is also a little unsettling. It’s fairly large, and its placement beneath the space bar is a good design move, but the clicking function might be improved. Clicking is simple in the lower part of the pad, but difficult in the top half without bending the keyboard deck.

The design of this convertible laptop helps it get the most out of its speakers. On the underside of the machine, along the lower right and left borders, there are two grilles where the speakers are located. This means that when you raise it like an easel, the sound profile will be slightly different because the grilles won’t be exactly facing your desk and bouncing the sound off of it.

That said, while the speakers will comfortably fill a room with high-quality sound, the bass feature is sadly lacking.

This laptop’s screen is more remarkable for its size than anything else. The Inspiron 15 7000 convertible’s 1,920 by 1,080-pixel panel sports a rich, glossy finish that gives it a classy look but that also doesn’t do much for visibility in bright light conditions.

Speaking of brightness, the Inspiron 15 7000’s IPS panel boasts a peak brightness level of about 300 nits, which is okay, but not the best we’ve ever seen. Conversely, the screen covers 97% of the sRGB color spectrum, which is actually pretty decent. Color rendition is as close to true as possible, while images on the screen appear vibrant the vast majority of the time.

The touchscreen is pretty accurate and responsive, and the option of a digital stylus only serves to make working on the display that bit more intuitive. Nevertheless, we wish the bezels were a bit trimmer. On a positive note, we believe the webcam shutter to be a good addition.

The Inspiron 15 7000 2-in-1 laptop is equipped with an integrated Intel Xe Graphics GPU, which, while not being as powerful as discrete AMD Ryzen cards, is strong enough to execute most low to mid-range creative tasks.

It’ll comfortably punch through light photo and video editing, spreadsheet, and even video transcoding tasks. The going might get a little tough with some of the more intense content creation tasks, but you can expect this 2-in-1 laptop to get through them, even though it’ll stumble rather than sprint over the line. In a nutshell, the Inspiron 15 7000 performs comparatively better than its contemporaries on this front.

While it’s not been advertised as a gaming laptop, the Inspiron 15 7000 performs relatively well here too. Its powerful processor, coupled with a fully respectable graphics card, gives it enough oomph to run less-demanding titles at pretty decent frame rates. With a little creative tweaking of your settings, you can even get it to run some more graphics-intensive games, although the gaming experience will be diluted at best.

These days, more and more laptops, Chromebooks, and convertibles are pushing the limits where battery life is concerned. This is perhaps why the Inspiron 15 7000 2-in-1 laptop’s standby time of a little over 9 hours is not as impressive as it once would have been. It won’t last the full day, but that won’t be an issue if you don’t mind tethering up from time to time.

Things might become a little heated if you put the Inspiron 15 7000 under a lot of stress. Fortunately, Dell’s proprietary Power Manager control panel can avoid this, with four thermal settings — Optimized, Cool, Quiet, and Ultra Performance – giving varying trade-offs between performance, heat, and fan operation. The fan is a touch too noisy while it’s in full conversation.

An eleventh-generation Intel Core i5-1135G7 Tiger Lake quad-core CPU with 8MB cache and a burst speed of up to 4.2GHz do the grunt work under the hood of this laptop. And with 12GB (8GB+4GB) of 3200MHz DDR4 memory, it’s more than capable of making light work of most productive and multimedia tasks.

It coped admirably well with a few of the more intense tasks, executing our benchmarking tasks such as video transcribing, gaming, photo editing, and video editing without any noticeable lag, even though the fans tend to go into overdrive in these situations. For office tasks such as word processing, web browsing, and spreadsheet creation, it sped through all of them without breaking stride.

The best part is that it could handle quite a few of these tasks simultaneously without the loading icon appearing even once. It cycled through numerous open tabs on Chrome while playing a video in the background, and it didn’t struggle.

If you’re looking for a laptop that offers that enchanting blend of design, power, and performance, but don’t want to pay premium prices for it, the Inspiron 15 7000 may just be tailor-made for you.

Boasting solid build, decent components, and impressive performance, this 2-in-1 laptop is a great alternative to the pricier options if you need a work machine that can take and land heavy hits. And when your interest switches to play, detaching the large HD screen or simply switching the laptop to tent shape converts it to a tablet ready for multimedia use.

The mediocre keyboard and middling battery life are things that can be improved on, and the limited port offerings can be a bit of an inconvenience. However, if these issues do not sour the deal for you, you can be sure that you’re getting a great deal with this laptop.