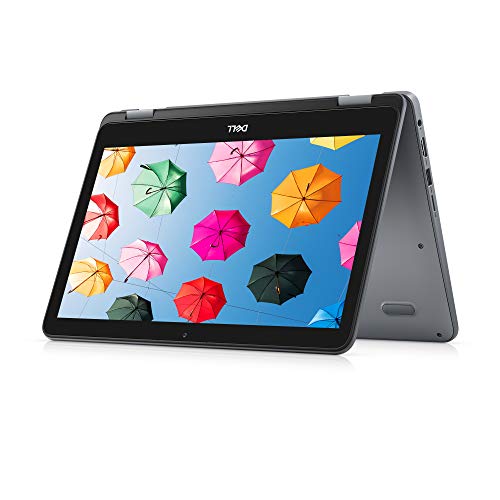 Lightweight and portable enough to fit snugly under your arm, versatile enough to switch seamlessly between laptop and tablet, and inexpensive enough to fit almost all budgets, this 2-in-1 laptop looks extremely promising, at least on paper.

However, that’s about where the positives end. The Dell Inspiron 11 3195 laptop’s budget-friendliness is as much a pro as it is a con, and it doesn’t take much to find this unfortunate fact out.

For one thing, the laptop’s build quality is not something to shout about, in spite of its pretty decent look, while the laptop’s performance leaves a whole lot to be desired. The sleepy-looking screen is unlikely to set hearts racing as well.

All that said, it’s very hard to find a new laptop that’s offered at the price that this laptop goes for. As long as you temper your expectations a little (or a lot), the Dell Inspiron 11 3195 can do a satisfactory job.

This 2-in-1 laptop’s main strengths are its portability and small form factor. Rather pleasingly, it manages to look pretty decent as well, in spite of its budget status. It sports a cobalt finish that gives it a look of simple elegance that belies the cheapness of its construction, at least to the eyes. The material feels good to the touch too, even though you’ll suspect that it won’t hold up well under sustained scrutiny.

The hinges are solid enough, and it’s impossible to stress enough how important this is in a 2-in-1. There are two hinges on each side of the screen, which hold the panel well, whether it is upright or leaned back, even when you raise the entire piece from your desk. Neither of them is so tight that rotating the screen is difficult, and switching immediately to tablet mode is easy. The Inspiron 11 can be used in any of the stages between laptop and tablet, but the relatively small size (and low quality) of the screen ensures that the applications are limited.

The Inspiron 111 3195 offers a solid variety of ports, so there can be few complaints in this area. Along the left flank, there’s a modern USB 3.1 port, along with an HDMI port and a microSD card reader for supplemental storage.

Switch to the right flank, where there are two USB 2.0 Type-A ports and a headset jack waiting to be explored. That pretty much wraps up everything, with all the basics accounted for.

This laptop’s keyboard is one of its biggest letdowns, and after the screen, is one of the areas where it becomes abundantly clear that the Dell Inspiron 11 3195 is a budget laptop. To say that a few concessions were made in these places would be stating the obvious.

The keyboard feels lightweight, plasticky even, to the touch, with a lot of flex that feels off-putting, to be honest. In addition to this, the keys themselves feel mushy, no thanks to the shallow key travel. On a positive note, the keys are large enough and relatively well-spaced, so typing up docs or creating spreadsheets are not completely negative experiences.

Moving on, you’ll be interested to find that the touchpad works surprisingly as well. Given that most budget laptops under $300 skimp hard when it comes to the quality of their touchpads, this is an undoubted positive.

While they are quite adequate and even efficient in and of themselves, this laptop’s speakers won’t fill you with the urge to phone in a radio program and dedicate a shout out to them. The Dell Inspiron 11 3195 is equipped with built-in stereo speakers, with the Waves Maxx Audio Pro offering complete control of the laptop’s audio system.

The ongoing problem with the absence of any real bass reoccurs here too, perhaps understandable given that the laptop’s form factor makes fitting in anything hardcore an uphill task. If you’re more concerned with volume than audio quality, this laptop delivers sound results in that aspect. The speakers are good enough to produce more than decent multimedia volumes without you having to strain your ears.

The Dell Inspiron 11 fares rather less impressively on the display front. The screen is wrapped by chunky bezels, but that quibble pales in significance when compared to the other shortcomings of this 2-in-1 laptop’s display.

Due to manufacturing corners cut in an effort to bring down the price, this laptop’s display does not inspire any confidence in its durability. Images on the screen ripple noticeably when touched (particularly at the edges), and it’s tempting to wonder if the screen can survive any kind of trauma.

That issue would have been easier to sweep under the carpet if the laptop’s display was good enough to serve as a diversion, but here again, it underwhelms. Dell describes the 11.6-inch screen of this laptop as HD, and on paper that’s true. But the reality is a bit different; the Inspiron 11 2-in-1 laptop’s 720p resolution falls to compare favorably with the quality of a 1080p screen, and if you’re familiar with both, it won’t be difficult to tell the difference. In terms of image clarity and color fidelity, this screen will not score anything remotely close to top marks. But then again, that’s pretty much par for the course in budget laptops.

The Dell Inspiron 11 3195 offers integrated Radeon R5 graphics which is not exactly common. However, not common here does not translate to “great” or even “good” since the laptop lags comfortably behind other laptops (even budget ones) in terms of executing graphic-intensive tasks.

We ran the laptop through the usual content creation workloads and even though our expectations were not sky high, the laptop still managed to surprise us with the extent of its struggles while performing the tasks. It took ages to complete some and just flat out failed to see others through.

Considering all these, it’s safe to say that the Inspiron 11 3195 was built for simple internet surfing, multimedia, and word processing tasks. Anything more demanding, or for any other task that requires a graphics card with more oomph, you may have to consider other alternatives.

Playing games on this laptop is possible, but you won’t get a particularly enjoyable experience. Sure, it’ll cope adequately with basic games, but will struggle massively with anything more ambitious.

To get AAA games to even play, you’ll need to load them at low settings and resolution. And even then, the games will run at such low frame rates as to massively dilute the gaming experience. In a nutshell, this laptop’s in-built AMD Radeon R5 M230 graphics card is not the best for gaming.

Here again, the Dell Inspiron 11 2-in-1 laptop fails to measure up to the standards set by other laptops that make up the competition. The 28 WHr, 2-Cell battery that’s fitted under the laptop’s hood offers between 5 to 6 hours of juice between charges, which ranks firmly in the disappointing scale of things.

As always, operating the device with low settings will marginally improve output a bit, but if you’re going to be out and about all day, it’s best to go along with the laptop’s charger, as the battery will not last all day.

Fortunately, this laptop does not have a heating problem, and the fans, while always active, do not unduly let you become aware of their presence. Of course, when the stakes are higher and it’s forced to exert itself, the whirr of the fans becomes more noticeable and things can get a bit hot. On the whole, though, this laptop is pretty laid back, doing most of its work without fuss.

Making allowances for a few upgrades here and there in different configurations, the Inspiron 11 offers an AMD A9 processor, 4GB RAM, Radeon R5 graphics, and 128GB SSD storage. These are, on paper, fairly decent specs, even though the storage room can fill up pretty fast if you use it for a lot of productive tasks. The AMD A9-9420e (1MB L2 cache) is a dual-core processor with a base speed of 1.8GHz and a turbo boost speed of 2.7GHz.

On the flip side, the Inspiron 11 struggles to execute tasks with any decent level of speed. In fact, one of the biggest complaints with this laptop’s performance is its lack of verve. It takes longer to launch programs and even longer to run them than other laptops.

Even some of the less demanding tasks such as web browsing, word processing, and video playback are executed with more lagging than you’d expect. Image processing and video transcoding will, as you can already expect, be a major slog. Performance-wise, not only does this laptop not fail to pull up any trees, but it doesn’t also execute simpler tasks with the same level of panache as you’d like or expect.

The Dell Inspiron 11 3195 2-in-1 laptop is eminently affordable, and its concise form factor and lack of bulk enhance its appeal. However, a slew of flaws makes this laptop easy to overlook in favor of others with better performance, even for increased costs.

If you’re content with a laptop that does the bare basics and can cope with much-reduced execution speeds, then you’ll find this laptop irresistible. On the other hand, if you’re looking for a laptop that at least offers decent performance without setting the world alight, you should consider increasing your budget and going for an upgrade.