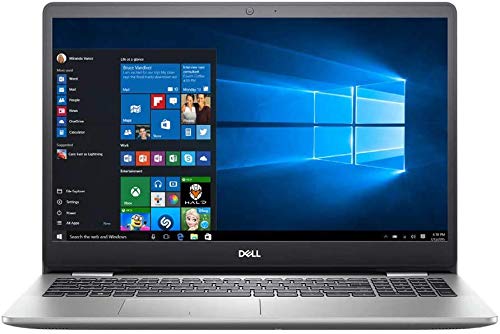 The Dell Inspiron 15 5000 counts good build quality, reasonable specs, and decent performance among its list of qualities. It’s just a shame that its list of negatives is similarly extensive, with an unremarkable screen, flimsy keyboard, and battery performance that leaves much to be desired among the most jarring.

Design-wise, this laptop will attract more shrugs than gasps of admiration, while epic poems will probably not be written about its performance as well. The Inspiron 15 5000 is exactly what it looks like, a low to mid-priced gadget designed to get through several tasks without truly excelling at any.

Dell doesn’t stray too far from the known when it comes to the design of laptops in the Inspiron series, with the result being that many of them look practically identical. The Inspiron 15 5000 looks almost exactly like its predecessor, the Inspiron 14. A key difference is that the latter sports a completely metal finish, while the former is predominantly plastic.

That said, the Inspiron 15 5000’s build quality is surprisingly good. The screen doesn’t wobble when you lift the lid and barring a few jitters, the underside holds up quite well. The keyboard is another matter entirely (as you’ll find out later), but overall, the laptop feels sturdy enough to survive a few bumps and scrapes.

Weighing almost five pounds, this laptop is certainly not ultraportable, and your hands may begin to feel the strain if you hold it for extended periods.

Still, it looks and feels sturdy, which counts for a lot. As long as you don’t place a heavy weight of expectation on it, the Dell Inspiron 15 5000 can carry you through significant periods of usage.

The Inspiron 15 5000 did not throw up any surprises in terms of its design and its port situation doesn’t offer up any surprises either. A trio of USB ports, an HDMI output, and Gigabit Ethernet, as well as an SD card reader, round out the port configuration.

The memory, hard drive, battery, processor, and wireless card are all conveniently accessible through the base panel, which lifts away once only two screws are removed.

This laptop’s keyboard underwhelms massively. The island-style keys boast 1.4 millimeters of travel, but the keys feel distinctly plasticky and loose, making it hard to enjoy performing any productive task with them. On a positive note, the presence of a number pad offers a rare moment of cheer to number crunchers.

For serious typing, the keys themselves aren’t ideal. The keys don’t have enough travel, and the base isn’t sturdy enough – a combination of problems that can make the keyboard seem unsatisfactory, lacking the movement and conviction of better, more costly laptops. It’s fine for browsing, instant messaging, and the occasional email, but that’s about all it’s good for.

On another note, the touchpad is fairly accurate and pretty spacious. The touchpad is initially excessively sensitive, but this can be adjusted in the Control Panel, and the rest of the device is fine – the surface is smooth and responsive, and the buttons are light and consistent.

This laptop is solid if not outstanding in the audio department. The speakers are loud enough to circulate a small room, and the vocals are pretty decent. Because the top-end is tinny and the bass isn’t powerful enough, music, movies, and games all lack oomph. On the other hand, it’ll work perfectly for video conferencing.

It’s hard to get excited by the Dell Inspiron 15 5000’s display. The laptop’s 15.6 inches screen is a big disappointment, and we found that it sucked most of the enjoyment out of the multimedia tasks we put it through. The display appears dull, and it struggles to maintain visibility when the laptop is used out in the open.

The screen covers just 67 percent of the sRGB color gamut, falling well short of the average 89 percent that’s the benchmark for laptops in this category. Colors are inaccurate, with a color temperature of 7,761K, which is significantly too chilly.

In terms of screen brightness, this laptop doesn’t measure up to standards as well, with its average of 175 nits comfortably dwarfed by the category average of 230 nits. Due to these limitations, the screen lacks the quality and resolution needed to handle serious tasks, with its main flaws being a lack of contrast and color accuracy. It’s good for browsing the Web and watching videos while you’re on the go, but not much else.

The screen is wrapped on all four sides by large bezels, and there’s a webcam fitted snugly at the top bezel.

Equipped with Intel’s integrated UHD 620 graphics, the Inspiron 15 5000 laptop offers decent graphics capacities. That is to say that it’ll execute tasks that are not graphics-intensive daily easily and struggle against tasks that are.

You may be able to get away with light photo and video editing, along with other content creation tasks without the laptop feeling like it may explode at any moment. Anything heavier and you may have to call the fire department.

Some laptops can deliver a fairly decent gaming experience despite not wearing the gaming laptop tag. The Dell Inspiron 15 5000 is not one of those laptops.

Its fast processor and plentiful RAM should ordinarily count for something, but they’ve been hamstrung in this case by the inadequate graphics card. Bringing down settings to the barest minimum may help smoothen the terrain for older titles to run at decent frame rates, but AAA games are pretty much out of the question.

Again, this laptop’s battery is not up to par. On a single charge, it offers about five hours standby time, well below the category average of 8 hours. The laptop isn’t overly light, to begin with, and with this, you’ll have to carry its charger everywhere with you as well, if you’re looking to use the laptop for extended periods.

As usual, you can eke out some more time by dialing down operations, but it’s hard to see how this will significantly improve things.

The laptop’s fans make themselves heard intermittently, going into overdrive when the laptop is forced to execute tasking programs. The noise does get irritating sometimes, and we found ourselves wishing for headphones to drown out the noise. Thankfully, upgrading to an SSD fixes this issue effectively.

The Inspiron 15 5000 is offered in a number of configurations, with a slew of hardware options available at different price points. Our review model packed an Intel Core i7-825OU processor, 8GB of RAM, Intel UHD 620 graphics, and a 1TB HDD under its hood. Both the RAM and HDD are upgradeable, and the HDD can be swapped for an SSD.

Those are decent enough specs and the laptop’s performance is better for it. It scraped through our benchmark tests without much ado, even though it struggled a bit with the more intensive ones. Ultimately, though, this laptop performs smoothly, lags infrequently, and multitasks like a real pro.

It is powerful enough to handle a swarm of chrome tabs, a few spreadsheets, and a 1080p film all at once.

The Dell Inspiron 15 5000 is a tight laptop that won’t win many awards for design and performance, but the laptop is actually pretty decent in its own right, much like the Inspiron 11.

A few concessions had to be made to keep its price low, as evidenced by the below-par keyboard and unremarkable screen. Its middling battery also falls way short of expectations.

On the whole, however, this laptop boasts good build quality, with just enough power to satisfy most casual users.