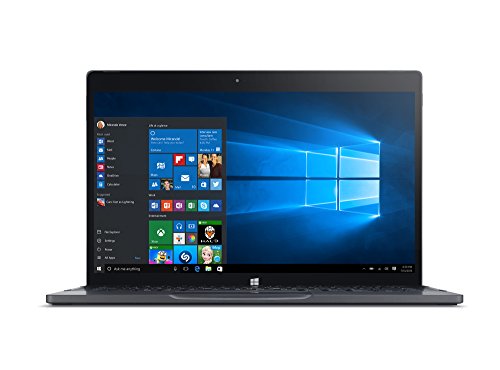 From the get-go, it’s clear that Dell has invested a lot of thought and effort into the design of the XPS 12, particularly on the 2-in-1 laptop’s screen and backlit laptop. But the hingeless outlook of this convertible is a bit limiting and may take some getting used to.

Sturdy, smart, and forward-thinking are some of the words that may be used to describe this convertible ultraportable. In addition to its unconventional form, the laptop is also offered with a range of optional accessories targeted at helping users enjoy the full laptop and tablet experience in equal measures.

In spite of this device’s premium billing, however, there are quite a few issues. For one thing, this laptop’s battery life is profoundly disappointing, and for another, the absence of an HDMI port means extra cables to lug around. And, despite its quirky design, it’s still a device that works better as a clamshell laptop than as a tablet.

The Dell XPS 12 is a svelte, all-black affair that practically screams elegance. However, while its overall appearance of understated brilliance makes you want to grab it and run away with it, its fully detachable form is a bit of a head-scratcher.

Unlike other hybrids before it, there are no hinges to permanently fuse the two halves of the device. Dell swapped out hinges, prongs, or any other latching mechanisms, electing to connect the device’s display with the keyboard (otherwise called the Premier Base) by creating a groove on the premier base where the screen simply slots in.

This arrangement looks impractical, but a combination of included magnets, friction, and gravity create enough impetus for it to work surprisingly well. It’s not perfect, though. With no hinge, the screen will remain at a fixed 110-degree angle while docked with the base; it cannot be angled to your preference. Nevertheless, it won’t take long till it becomes natural to open and close the screen; once you get used to the absence of hinges. When folding the device closed, the tablet part nearly always aligns without any hassle to the bottom area of the device.

Dell also included a magnetic fabric cover, which adds to the XPS 12’s already complicated configuration. It does, however, come with a pen loop and extra magnets to keep the tablet in place. Similar to the fulcrum hinge on the Surface Book 2, the XPS 12 extends the base when it is opened by folding down the additional fabric cover.

The XPS 12 weighs 1.75 lbs when detached from the keyboards and used as a tablet. Connected to the keyboards, it comes in at about 2.8 lbs. In spite of its light and thin design, the XPS 12 boasts superb build quality, which speaks volumes of its durability.

Dell attempts to make this convertible one for the present as well as the future with the inclusion of two USB Type-C ports. Both ports offer Thunderbolt support, meaning they can be used to charge the system and transfer large files at breakneck speeds. On the flip side, the absence of an HDMI port seems like a heavy price to pay for this.

Also spread along the sides of the display and premier base are a microSD slot and a headset jack. For wireless connectivity, the XPS 12 offers Bluetooth 4.1 and Wi-Fi.

The Dell XPS 12 convertible’s island-style, backlit keyboard is a delight to work on. The keys sport a slightly concave design, with 1.9mm of travel distance ensuring that typing out bulky word documents does not feel like such as slog. Working on this 2-in-1 laptop is also made easier with Dell’s proprietary stylus, the Active Pen. Dell’s $50 Active Pen connects to the XPS 12 via Bluetooth and has 2,048 levels of sensitivity, two buttons on the barrel for erasing and selecting things, and a third on top for launching OneNote.

The glass touchpad is just as pleasurable to use. It’s fairly small, but it’s also very smooth and detects multi-touch movements with exactly the appropriate amount of palm rejection. The best part is, you don’t have to tinker with any of the touchpad settings to arrive at the sweet spot.

If you find that the regular non-adjustable keyboard is not to your liking, there’s also a $50 magnetic travel keyboard that offers a great typing experience as well as a study, adjustable kickstand, and loop for carrying Dell’s optional Active Pen. this keyboard is sold separately or as part of a package.

The XPS 12 performs well in the audio department as well. The laptop’s forward-facing stereo speakers, placed snugly at the top of the tablet, render sounds quite competently, even if they are not the loudest. However, while the highs are true to form, the speakers struggle to reproduce bass.

The XPS 12’s 12.5-inch, 1920 x 1080 display is perfect for both work and play. The screen provides impressive detail, rendering images with impressive clarity and contrast.

The panel covers 114.3 percent of the sRGB spectrum, blowing the competition out of the water. In addition, its 413 nits brightness rating comfortably dwarfs everything the others in its category offer up.

The bezels that surround the screen are anything but slim, but we suspect that they’re necessary to provide something for your hand to grip when the device is used as a tablet, so your hands do not encroach on the screen. The top bezel also houses the device’s speakers as well as its cameras.

The Dell XPS 12 is equipped with integrated Intel HD Graphics 515, which makes it capable of breezing through regular tasks. On the other hand, it also means that the laptop will be stretched almost to its limits with resource-intensive programs and applications.

In our benchmark tests, the XPS 12 steamrollered through simple word processing and web browsing tasks. It did, however, start to lag and blow hot when we put it through content creation programs.

Gaming is not included in the list of this laptop’s strengths. You can get it to run older, less graphics-intensive games without many incidences. However, the XPS 12 convertible will massively struggle with modern AAA titles, even with reduced graphics settings.

Maxing out at a little over 5 hours, the XPS 12’s battery performance is seriously underwhelming. Detachable laptops are not exactly known for the stamina of their batteries, but the XPS 12 is not one of the better performers in this category. As always, though, dialing down on applications that are particularly hard on the battery may fetch a few more minutes of runtime.

During our heat test, the XPS 12 stayed below our 95-degree comfort threshold despite its tiny profile (15 minutes of streaming HD video). The area between the Dell logo and the rear cam on the back pushed the line to 94.5 degrees Fahrenheit, while the front stayed at 88 degrees.

The absence of mechanical parts ensures that this laptop stays quiet even under duress.

The XPS 12 packs a 1.1-GHz Intel Core m5-6Y75 processor, 8GB RAM, and 128GB SSD in its slight frame, making it a pretty powerful hybrid laptop. It executes programs with accomplished pizzazz, taking seconds to start up full, and even fewer seconds to launch applications.

The laptop also packs a decent punch when it comes to multitasking. We were able to get it to stream a video on YouTube using Chrome browser, with 20 other tabs open, a spreadsheet program running in the background, and several other programs also running, yet the laptop did not break stride.

Having said that, it did struggle with more resources intensive photo editing and video editing programs.

The XPS 12 is a device that’s equally comfortable at work and play. It is powerful enough to make light work of most office tasks, while its beautiful screen makes you want to lounge around and watch videos on it all day.

Dell intended the novel hingeless design of this laptop to be its headline attribute, but it’s also one of the laptop’s biggest flaws. For one thing, it makes lounging around with the XPS 12 almost impossible without accident. We also have a problem with this laptop’s short battery life and the dearth of configurations on offer feels pretty stifling.

Still, the Dell XPS 12 is a very solid machine. We prefer a laptop that doesn’t have such an extensive list of cons, but if you can overlook its flaws, the XPS 12 is a pretty solid investment.