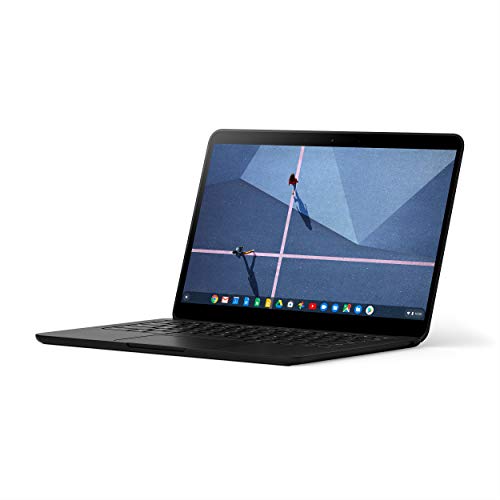 Most Chromebooks seem to play out a script that places them to be as conservative with pricing as they are with performance. The Google Pixelbook Go goes relatively easy on the pocketbook as most Chromebooks do, and then it changes the narrative by staging what is undoubtedly a high-powered performance by Chromebook standards.

This Chromebook pairs a Core i5 processor with 8GB of RAM and 128 GB of storage space, more than enough to power through all your regular and productive computing endeavors. While the build is sleek and slender, the 13.3″ display is brilliant in whatever resolution and the battery is the clincher.

There are a few provisions that divide opinions, none so much as a meager port selection and a keyboard that gives up some of its travel for noiseless feedback. But we can all agree on one thing, this is no regular Chromebook.

While the gray Google “G” logo replaces the traditional Chrome logo at the top of the lid, the bottom of the laptop sports a rippled pattern that is both gripping and grippy.

The color options for the laptop come with conspicuous prefixes, Just Black, as with our review model, and Not Pink, along with a textured finish that stems from a magnesium alloy shell.

There is a seeming dearth of visual features at the plain black lid, but when it is not looking all serious, it does add a certain type of slick to the general look of this laptop.

With a weight of just 2.3 pounds and a thickness of 0.5 inches, this device can stake a credible claim for one of the most portable Chromebooks in its size class.

Its portable profile does not leave it vulnerable to flex. The lid will not wobble as you flip it, and when you settle on a viewing position, the hinges are sturdy enough to hold the lid firmly in place. As for the screen, the bezels at its top and bottom are a tad thicker than those at the sides.

Ports are definitely not this laptops’ thing if we’re to go by the two USB-C ports that it parades. But these ports can cater to all your charging needs and still provide means for connecting to external displays.

By modest Chromebook standards, it is a passable port collection, and it is in addition to a 3.5mm headphone jack.

Its wireless internet provision operates on the Wi-Fi 802.11 a/b/g/n/ac standards, and there is a Bluetooth 4.2 feature in the mix too.

The biggest takeaway from the keyboard on this laptop is the faintest of feedback that is produced by the keys on being clicked. To achieve this hush feedback, the keys have to give up some millimeters of travel. Still, it doesn’t necessarily make typing on the keyboard a chore.

The six-row key ensemble is stocked with lower-case and white-font keys that glow under a single color backlight. As for the backlight, its brightness can be adjusted by toggling on a dedicated key while holding down the alt ticket at the same time. Other special keys include one that is set aside for the Google Assistant and another for prompting the Google search bar.

The 4.6 x 2.6-inch touchpad is smooth and highly responsive to a wide range of inputs and gestures. Its surface is very pleasing to the touch, making for comfortable navigation and scrolling through web pages. The cursor movements tend to be erratic at times, but you can always bring it under control in the snap of a finger.

On both sides of the keyboard deck is a stretch of speaker grilles that service the Pixelbook Go. As the speakers are top-firing, they get sufficient clearance that should ordinarily suffice for decent impact.

Although the speakers are not the biggest, not to add that they do not get anything in the way of software support, the audio delivery hits the right chord, at least with volume. The sounds are not big on bass or ranges and may go a bit out of tune at high volumes.

But if your expectations are not ceiling-high, then you should be fairly satisfied with the audio from this laptop.

The display comes in options of 1080p or 4K resolution, both of which are touchscreens and with the latter looking like overkill for a Chromebook. Most people will find the Full HD display to be particularly vibrant and sharp. Texts are crisp and images are striking, with little to zero graininess and smooth visuals in the making.

It gets even better, a 108% coverage of the sRGB spectrum and a brightness level that peaks at 368 nits will give it an edge in color reproduction. Both of these figures are way above the regular Chromebook average, with the 93% sRGB gamut for the Asus Chromebook Flip C434 a close call.

As for the touchscreen, it is very well responsive to the slightest of taps. And while the smoothness of its surface will make for easy scrolling through web pages and spreadsheets, the colors will not wash off your fingers, no matter how hard you press it.

A 1080p webcam is also mounted at the top of the screen, and it delivers amazing returns in photo capturing and video recording, the latter at 60 fps.

Chromebooks have never been known to parade graphics processors that are anything other than halfway decent, and this one is no different. This laptop’s Intel UHD 615 GPU is a lower-tier graphic card, so it does not bestow any special powers on its host laptop. You can put small touches and light edits to your photos and videos, but that is as far as you can go.

The Google Playstore is replete with photo editing apps that can run comfortably on this laptop, and you can always resort to a web-based app to get more options.

As for gaming, the Pixelbook Go is not entirely a write-off, thanks to its capacity to run a few Android games with varying degrees of speed and smoothness. Games like Asphalt have been emulated for the Chromebook audience, and you’ll mostly meet with little difficulty in spurts of screen stutter and flickering while running them.

Others like Mario Kart and Spelunky are very well optimized for Chromebooks, and the Pixelbook Go will have a good run with some of these games.

The battery capacity goes from 47 Whr for the Full HD model to 56 Whr for the UHD model, and it is a pretty fair allocation, it must be said. Our review laptop houses the former, and the runtime that it posts from our standard video playback tests, at 11.14, falls a little short of the touted 12 hours.

But we’ll probably let it slide because it is still an impressive figure, more than enough to get you through a full day of regular computing.

While about 20 minutes of charge will give you 2 hours worth of battery juice to work with, it will also reach full charge in just under 90 minutes.

As with most Chromebooks, the passive system of cooling is employed here, and we can not find any gaping holes to pick on. This laptop has been put through its paces and made to work the extra mile with exerting workloads. And although it will break a few sweats along the way, it will not leave a heat trail.

It came out largely unscathed from our most punishing tests, which mostly involve tons of chrome tabs and a couple of Android apps all bearing down on the Pixelbook Go. None of the laptops’ parts were found to heat up above the 95-degree mark, with the keyboard and the underside the hardest hit at 82 and 83 degrees respectively.

While our iteration of the Pixelbook Go runs on the 8th Gen Core i5-8200Y CPU, others can come with an Intel Core m3 or a Core i5 processor. It gets support in the way of 8GB of RAM and 128 GB SSD, decent specs by Chromebook standards.

What this Chromebook can do with relative ease is surf the web and run a lot of Android apps and games, and then it can even do more. You can stream videos and music with YouTube and Spotify, or play a host of compatible Android games over the Stadia platform. Creative folks can create designs with Canva and edit photos with Google photos or pixlr.

This laptop can process all the aforementioned tasks while switching between a dozen or more Chrome tabs and still hold out well. Other less-demanding computing tasks such as emailing with Gmail and word processing with Google docs will also run smoothly. It is also quite good with multitasking, especially with a couple of less taxing apps in the picture.

You might inadvertently clog up the systems’ memory and storage with Google-based apps among others, leading to fleeting moments of lags and stutter. But as long as you tread cautiously and do not load this system to the rafters, then you should be good to go.

Chromebooks are an easy and very affordable pick for those who do not expect too much in terms of computing power from their laptops. So when you meet a Chromebook that can do the basics right and still put the cherry on top of it while remaining relatively affordable, it is a no-brainer that heads will be swayed in its direction.

It parades a starry cast of components, chief among which are a gorgeous display, strong computing performance, and an enduring battery all lumped into a laptop that is so incredibly light and lithe. It is shy of ports, and the keyboard sacrifices travel and feedback for bells and a whisper.

But this device offers a performance that is as close to a Windows laptop as we’ve ever seen on a Chromebook. It is only natural and even fitting that it provokes a lot of interest.