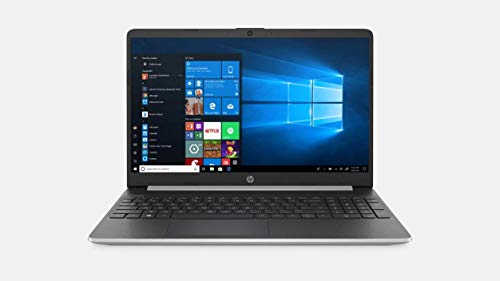 Packing an Intel Core i5 processor, 16GB of RAM, and 512GB SSD, the HP 15 Touchscreen laptop is equipped with serious hardware. While it’s touted as a premium laptop, in actual performance it is closer to that category known as mid-range. Thankfully, its price tag reflects this.

The plastic case is pretty decent, and the laptop itself looks attractive enough. It’s got enough power to absolutely steamroller through regular desktop work without much fuss, and a great keyboard and impressive trackpad complete its compliment of positives.

On the other hand, the laptop’s screen is thoroughly unimpressive, and this takes a fair bit of shine away from it. The laptop’s battery performance is disappointing as well, and the port offerings can only fairly be described as limited. Plus, the laptop may come across as unattractively bulky to some users.

All things considered, the HP 15 Touchscreen Laptop performs no worse than you’d expect mid-range laptops to, even though it hardly performs better. If you’re after a laptop able to execute light multimedia, web surfing, and word processing tasks smoothly, then this may just be the one for you.

Appearance-wise, the HP 15 Touchscreen laptop doesn’t stray too far from other laptops in HP’s i5 touch family. The lid and underside sports a moderately attractive silver finish, while the chassis sports a matte black finish.

Tipping the scales at 4.99 pounds, this laptop cannot be mistaken as an ultralight laptop, and this heft perhaps makes it better suited to desks than laps. There are positives to this though. The HP 15 Touchscreen Laptop boasts an incredibly solid build, the hinges are extremely firm, and when we flipped open the lid, the screen gave just the tiniest hint of flex. You’ll get the impression that this laptop is strong enough to tough out a few scrapes after a few minutes of handling it.

Having said all of that, the laptop’s plastic case is the strongest indication that a few compromises have been made to bring the price down. As we mentioned earlier, the screen is disappointingly pedestrian, despite its size. The touchscreen is pretty decent, even though it won’t break or set any records, while the bezels surrounding the screen appear unnecessarily large.

In spite of a few speedbumps, the HP 15 Touchscreen Laptop manages to look relatively dashing, with air vents under the chassis adding to its coolness, in more ways than one.

The HP 15 Touchscreen laptop provides a decent offering of ports. Spread along the laptop’s flanks are two USB Type-A ports, one USB Type-C port, an HDMI port, a headphone/microphone jack, and a microSD card reader, easy enough to take advantage of a USB docking station. The USB Type-C supports data transfer speeds of up to 5GB per second. The absence of Thunderbolt support is a real downer, although it’s an understandable omission given the price of this laptop.

The HP 15 Touchscreen laptop’s keyboard is one of its strong points. The keyboard has a full-width ten key layout that’s easy to get used to, as well as little flex and reasonable key travel. Keys are reasonably spaced and there’s a number pad to make the lives of number crunchers that much easier. All things considered, we found typing on the keyboard to be a pretty enjoyable experience, and the presence of backlights means we could work with it well into the night.

The trackpad fares a bit less impressively. It is a decent size and provides good feedback when clicked. However, we found it to be a bit unresponsive and the situation only improved when we jacked up its sensitivity to the highest level.

The touchscreen works as well as you would expect.

The laptop’s HD audio stereo speakers, tuned with the help of Danish audio crew Bang and Olufsen are decent, which seems to be the operative term for the whole laptop. They are loud enough to fill a small room with sound, so you won’t have to strain your ears to pick up music notes or words from characters when you stream movies on YouTube or Netflix.

The speakers render the high notes clearly enough, but it’s with the low ones that they struggle. If you want to enjoy your music with a bit of bass or create your own music production studio, you may have to plug in your headphones.

With a maximum screen resolution of 1366 x 768 pixels, this 15-inch laptop’s display is nothing to shout about. In truth, we regard it as one of the laptop’s biggest letdowns.

The panel offers a maximum brightness of 224 nits, way lower than the industry average of 300 nits. As a result, photos, games, and even websites appear more than a little dull and washed out. The screen covers 62% of the sRGB color gamut, making it also unsuitable for even the most basic of photo or video editing tasks. Watching videos on this screen is similarly not an exhilarating experience, although decent contrast means that text on the screen remains visible and legible even in brightly lit settings.

Graphic designers, web designers photo and video editors, and other creatives who use their laptop for drawing will find this screen almost impossible to work with. For uses other than these, this laptop’s panel is up to the task, more or less.

The laptop is not equipped with a discrete graphics card, which means you’ll have to make do with the integrated Intel UHD graphics card. What this entails is that the HP 15 Touchscreen laptop will be good for most regular tasks requiring minimal flexing of the laptop’s graphics muscles. On the other hand, it’ll struggle mightily with anything that compels it to stretch its graphics capacity.

The laptop’s graphics capacity is kind of a moot point since its decidedly poor display would have dampened the enthusiasm of anyone who hopes to put it to any kind of content creation use long before the unsuitable graphics card gets a chance to.

The HP 15 Touchscreen laptop is by no means a cheap gaming laptop. Its integrated Intel UHD graphics card provides just enough juice to run basic, older titles with anything approaching decent frame rates. And this would be after you’ve brought down settings to the minimum. If you’re looking for a laptop that can run AAA games, this is just not it, and HP didn’t advertise this laptop as one either.

Another area where this laptop underwhelms massively is in its battery performance. By bringing down its lights and other settings to a minimum and only performing regular desktop tasks, you may just barely be able to get eight hours out of it. Do anything significantly tasking and the performance falls well below the five hours threshold.

While that’s decent enough to ensure that it doesn’t get written off as a complete flop, it’s not thoroughly impressive either. Thankfully, the batteries do reach full charge after about two hours of being plugged in, ensuring that you won’t have to stay tethered too long.

To its credit, the HP 15 Touchscreen Laptop stays cool and calm during operations. Even when it’s asked to perform more graphics and processor-intensive tasks, the fans never ramp themselves so much that they become unbearably loud. In the same vein, the laptop itself never gets too hot to handle. While we did notice that some parts (especially the underside, close to where the vents are) got significantly warmer after heavy, prolonged usage, it never crosses the threshold into uncomfortable levels.

The HP 15 packs serious hardware (apart from a decent GPU, of course) under its hood, making it more than capable of breezing through most day-to-day desktop tasks. If you’re looking to get it to perform regular multimedia, web surfing, and word processing tasks, then you’ll find this laptop to be a heavyweight champ.

In our tests, the laptop easily handled several open tabs on Chrome, with multiple open programs running in the background (including a spreadsheet) without breaking stride. It easily cycled through all of them, and there was no discernable slowdown.

It did, however, draw the line on photo and video editing, 3D rendering, and indeed any program that forced it to dip into the limits of its graphics reserve. The integrated Intel GPU is the culprit here; the absence of a more powerful graphics rig is a very pointed indication from HP that this laptop isn’t meant for much more than day-to-day office work, despite its otherwise impressive array of components.

Unless you’re happy to play basic games, or older titles at vastly reduced settings, you won’t get much satisfaction out of this laptop if you’re a hardcore gamer. On a positive note, the laptop boots impressively quickly and maintains that speed throughout.

The HP 15 Touchscreen laptop is a handsome, moderately powerful laptop. While it doesn’t exactly qualify to be called a budget laptop, it does offer features and hardware that you’ll more likely expect to find on a pricier laptop.

It counts a fairly durable build, good performance, decent speakers, and a great keyboard among its qualities. On the other hand, a sleepy screen, disappointing battery performance, and no real graphics capacity, all feature prominently in the cons column.

If you’re in search of a laptop that’ll perform regular office and light multimedia tasks with a minimum of fuss, you can do a lot worse than settling for this laptop. However, if you’re a content creator looking for something with enough oomph to run your programs, you may need to look elsewhere.