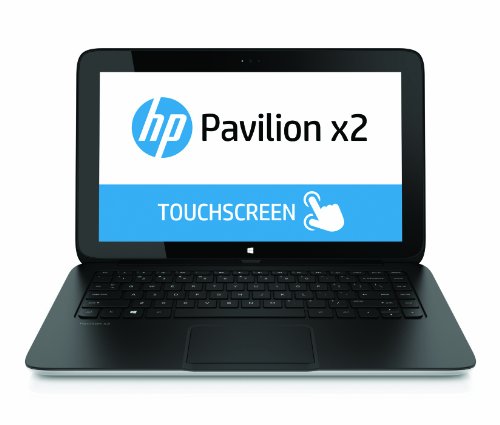 Our review model of the HP Pavilion X2 has seen some major changes since its last offering, although a more thorough overhaul would have served it much better.

While Windows 8 makes way for Windows 10, the clumsy plastic screen detach mechanism has been ditched in favor of a more reliable magnetic hinge operation. A new audio partnership is not exactly the big bang that we were expecting, and neither has the battery nor the display grown in leaps and bounds.

However, its decent battery life, coupled with an IPS panel display and an Intel Atom processor will take you through a day’s worth of workflows over the web and on the office suite, as well as a regular dose of entertainment with movies and light gaming.

So if you’re on a tight budget while on the lookout for a casual use laptop for work or play, or a secondary laptop that can do the basics right, then the Hp pavilion should interest you, with its price tag and flexible utility.

Chief among the notable modifications that this laptop has undergone from the previous rollout is the latch-less magnetic hinge mechanism that it now utilizes. The screen can easily be detached from the laptop in a snap for use in tablet mode, inserted back into the clamp with zero fuss, and then flipped with ease between tent mode, stand mode, and traditional laptop mode. Its design now sports a few tweaks that put some of its controls and components in vantage points. While the screen is flanked by an expanse of speaker grilles on either side, its edges also house all of the available ports.

However, the chassis is still of a plastic build, and the colors come in choices of red, white, and silver, with the latter costing about $10 less. The finish on the chassis will do well to conceal fingerprints and smudges while giving it the looks that will appeal to many.

And with a weight of 2.62 pounds in clamshell mode along with a physical dimension of 10.39 x 6.81 x 0.78 inches, this laptop can easily rank among some of the most portable detachable laptops in the contemporary digital marketplace.

This laptop can count a USB Type-C port among its port highlights, a provision that serves as a means of charging as well as a medium for the transfer of files.

Then there is an HDMI port with which you can connect to more vibrant external display monitors, as well as a microSD media card reader for expanding your storage horizon. Also in the mix is a USB 2.0 port that seamlessly connects to external device peripherals and a Headphone output/Microphone input combo jack.

All of the aforementioned ports file out at the edge of the lid, you’ll not find too many laptops around with this type of port assembly design.

For wireless connectivity, you can plug into 802.11ac Wi-Fi and Bluetooth 4.0. Don’t expect blazing fast internet with these specs, and it’s always best to be in close proximity to your routers while browsing on this laptop.

The keys in this chiclet keyboard are considerably well-sized and well-built, even more remarkable when you consider the form factor of this laptop. Their travel distance of 1.47 mm is very near the industry standard, while an actuation force of 55 grams will be kind on your fingers.

As this laptop is not the biggest around, some inevitable concessions have to be made with the keyboard ensemble and layout. Still, all of these trade-offs, none so much as the omission of a Numpad and the resizing of vital keys like the enter key function will not detract from what is, without doubt, a fairly comfortable typing experience.

The touchpad on the other hand is not exactly a bright spot. It gets a footprint that is conspicuous for its ample width and unusual aspect ratio. It will not necessarily bottom out quickly over the scrolls of lengthy web pages, but it does meet with some difficulty in registering your two-finger scrolling gesture.

The smoothness of the surface is a little suspect over short swipes, and it rubs off quite unpleasantly on the ergonomics of the overall input ensemble.

The highly recommended Bang and Olufsen speaker brand puts their name on the audio setup of this laptop, and you’ll find out that it counts for very little here. The speaker grilles line out in plain sight across the vertical sides of the screen, where they should ordinarily get sufficient clearance to make ample impact. But when you play music with this laptop, the sounds that emerge give no impression of emanating from a front-facing speaker setup, right there…in your face.

From the bass to the ranges and the volume, “passable” is the most complimentary word that can be used to describe their impact. In their defense, the partnership with the B & O brand was reportedly not extended to the hardware level, fair enough, and enough said.

The 10.1-inch display of this laptop, with a native resolution of 1,280×800 and a WLED backlight provision, is just what was ordered, considering the price of this laptop. It is even equipped with an IPS panel and so the display will appear visible at every turn, although the dead-center view spot still offers the best perspective. Its measured brightness level of 264 nits will turn out just fine for streaming videos on YouTube and Netflix. And the clarity of the display will not decline drastically, nor will the colors overly lose their sharpness while using this laptop in outdoor settings.

While its 68% coverage of the sRGB color spectrum will not exactly catch the eye, it is still a decent average by the not-too lofty standards of budget laptops under 600.

The screen is also touch-enabled, and so it gets an ample fill of touchpoints across its surface along with 10-finger multi-touch support to boot. The color will not trail off your fingertips when you tap on it in tablet mode, and the backlight will not bleed out across the chunky bezels at the perimeter of the screen.

Then there is an HP TrueVision HD camera at the top of the screen that will just about suffice for your average video call.

With integrated graphics from the stable of  Intel HD graphics to call on, there is only so much that you can get from this laptop in terms of graphics horsepower. It is the budget-friendly provision that users of this laptop are stuck with, and the output that it delivers will not turn heads, whether in gameplay or other graphic demanding tasks.

For graphic designers, your on-screen palettes will lack the pops of color and the full complement of tools to create the most visually stimulating content. You’ll have to ditch any form of graphic work that involves multilayer shading or application of filters and special effects and resign to basic picture touch-ups that involve simple cut and align procedures.

As for gamers, many of the most recent and biggest titles will stand little to no chance of being played on this laptop. However, less demanding games like Overwatch, Hearthstone, and even Counter-Strike: Global Offensive will get a fighting chance with dialed-down settings in graphics and lower resolution. A decent number of games from the FPS and MOBA repository should run at comfortable frame rates too, with the occasional fits of stuttering and lags in the worst-case scenario.

The battery life of this laptop is not spectacular by any means, but it will not offer below the bare minimum of what is considered to be a standard offering at this laptops’ modest price point. It should easily give you close to 10 hours of runtime, although Hp seems to tout a slightly higher figure for runtime.

With regular workloads, this laptop will see you through the exertions of work hours, and the on-screen distractions from the respite of coffee breaks. And after work hours, you’ll still find just enough power in this laptop to settle down to some recreation of your own for good measure.

The processors that are featured in this laptop employ a passive system of cooling, that is to say, that they make do without the use of fans in their working operation.

And as they exert a temperate heat strain(at worse)on this laptop due to their remarkable energy efficiency, the Pavilion X2 will remain largely cool and comfy in most parts of its chassis.

The temperature scale hardly ever crosses the comfort thresholds, which has almost generally been agreed upon to be set at around the 95-degree mark. It is mostly while handling this device in tablet mode at the thick of gaming that it starts to become a little warmish, but it thankfully never becomes too hot to handle.

With the Intel Atom x5-Z8300 processor on duty, this laptop will be best suited for the most basic computing tasks. It is armed with four cores and a base speed of 1.44 GHz, along with a burst speed at 1.84GHz that will not blow away any intensity of workloads. Factor in a 2GB SDRAM and a storage capacity of 32GB SSD and you get a clear picture of what to expect with this laptop.

And as Windows 10 slices off a sizable chunk of storage space from what is ordinarily a meager base provision, there is precious little to work with. This is evident in the waiting time that elapses during booting up, between command prompt and execution, and with the launch of apps and programs.

If the bulk of your daily routine involves run-of-the-mill computing work like emailing, web browsing, and video playback, then this laptop will fit the bill for the most part. Although it can spring up an unpleasant surprise at the thick of the action, with spurts of stutter and lag that will baffle much, which is not entirely unexpected for a laptop in its price class.

With a couple of windows apps that have been optimized to run smoothly on this laptop, the overall system performance will get a boost of some sort. You can stream songs in real-time with Spotify, browse seamlessly on Microsoft Edge, and work extensively with the full complement of stock apps in the office suite. Any other thing will be a complete chore. Multitasking is a relative tightrope, the laptop will totter with half a dozen Chrome tabs and a couple of spreadsheets in the background.

The HP Pavilion X2 is not remotely well-spec’d enough to raise the bar for budget laptops in any ramification of performance, and so it doesn’t. With processors from the bargain basement of the Intel lineup, along with scrimpy base storage and memory provision, it is not set up to flourish. It does get better though, this laptop can boast of a sleek build and a USB Type-C port, along with a fairly decent battery and energy-efficient processors to work with. And the trackpad puts the damper on a keyboard that makes good use of its puny space allocation.

As long as you can temper your expectations, the Hp pavilion X2 will cut out for a casual use device, from content consumption in tablet mode to workspace productivity in laptop mode.