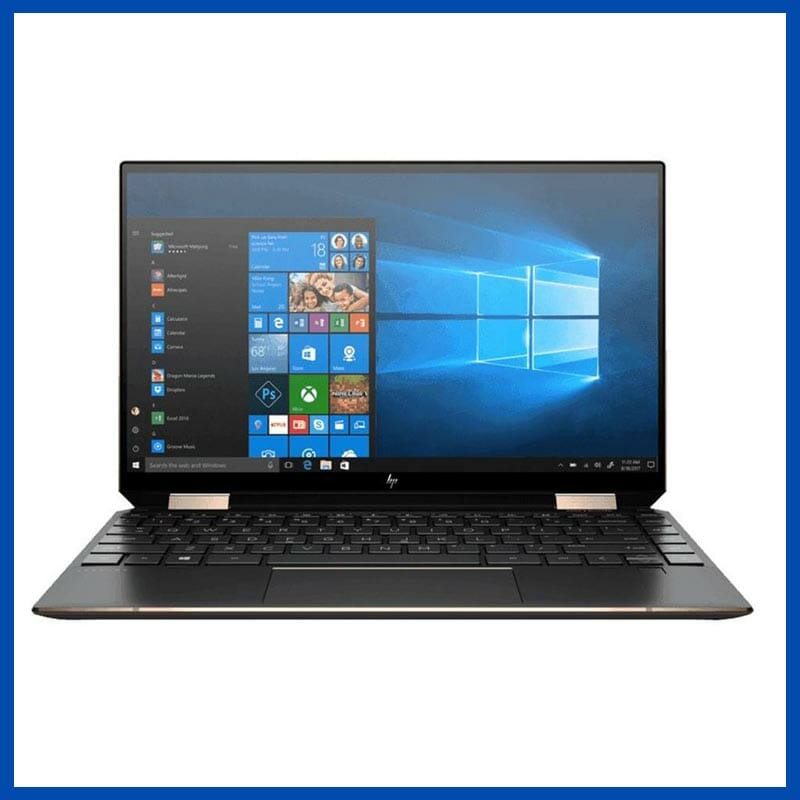 The HP Spectre x360 is a surefire pick if you desire a laptop with impressive processors, a variety of snappy connection options, and a pleasing display to match. Its 10th gen core-i7  processor, superior bandwidth speed, and generous pricing make it a viable alternative to its peers, such as the Dell XPS.

The aforementioned features make it well suited for businesses, and that is without mention of its security-centric features and a decent audio/visual output. There are caveats, as usual. More work needs to be done on the weight and the display bezels to make it even better.

It features a familiar plane magnesium alloy surface, bounded by polished edges and corners, including rear corners that are adorned by a distinctive “diamond cut” detail. The surface is rendered with a material smoothness that does well to conceal fingerprints. The chassis is sturdy and well built to support the 360-degree rotation that is enabled by the laptops’ flexible hinges.

The hinges could do with a little more firmness as they tend to wobble to some extent while the angles are adjusted.

For a convertible of its size(15″), this device could do with lesser weight than it possesses (2kg). Handling this device in tablet mode is quite the work.

There are a couple of fairly notable changes to the port assembly around the lustrous edges of this spectre x360 model. It features a Micro SD in place of the full-size SD reader. Dual Thunderbolt 3 ports and a solitary USB Type-A port makes a return from the 2018 model.

The angled “gem cut” rear corner spots a Type-C thunderbolt bolt port that makes a case for aesthetics and functionality. Other worthy mentions include a power button stripped of its fingerprinting function and a camera shutter that can disable the display’s windows hello camera.

Extra security and privacy are the gains of the latter as it means your webcam(which is still poor by the way) can now be cut off at the hardware level.

Novelty is almost lacking in the design of the keyboard and trackpad employed in this model. The keyboard is still firm and springy with exceptional feedback while featuring two levels of white illumination for its backlighting.

The presence of numeric keypads and the short travel distance of sizable keys that give low clatter, make it a top keyboard pick for offices.

The (12×6 cm) clickpad is similarly decent, but might appear too confined as a result of its rectangular layout. The friction in its feel is suited for any pace of scrolling, and the integrated mouse keys give non-clicky and satisfactory feedback.

The 4K 15.6-inch WLED touchscreen yields satisfactory returns in display brightness, color coverage, contrast ratio, and sharpness. There is an apparent glossiness to the 3840 x 2160 pixel resolution, this brings glare issues when used in sunlit places.

You might want to tune down on the “nits” or find the nearest trees whenever you go for a picnic. That being said, the IPS technology in this device gives you nice viewing angles and vibrant colors that will impress your office mates during a PowerPoint presentation.

Lastly, as always, trimmer bezels will be welcome.

The GeForce MX250 gives you nice graphic power at a lower battery cost similar to the MX150 that it just feels like a rebrand. This GPU will give great audio and video editing experience, and decent gaming(emphasis on decent) at reasonable battery power implications. By comparison, the more advanced graphics card like the GTX and SKU with Core-H will require a massive 135W AC. So you essentially get what you want, eventually.

The speakers are supplied by the reliable Bang and Olufsen brand, and that speaks volumes about audio quality. The audio from this quartet of speakers is balanced and sharper. There is better bass reproduction that can be observed as the sounds boom from the speakers. Also, the right and left speakers provide an audible stereo split that makes for good listening.

Gaming with the X360

Gaming is slightly more enjoyable with this laptop than it was with the 2018 model with GeForce MX150 graphics. The frame rates for games like the Witcher 3 and The Rise Of The Tomb Raider are respectable, but with the occasional dips that can be amended at the performance settings toolbox. Another identifier of game performance is GPU clock rates which are generally fluctuating when the top games are played at full mast. In short, this is no gaming laptop.

For the 10th gen intel core i7-10510U processor, you are assured of speed, power, and coverage too. The processor is based on the Comet Lake-U family and is capable of undergoing the most intense tasks without breaking down. With frequencies spanning from 1.8 to 4.9GHz, connectivity is faster and the Wi-Fi 6 gives this device an area of strength.

As is often the case with laptop batteries, you almost often have to make compromises. With a 4k screen, a powerful quad-core processor, and discrete graphics, the power draw will be inevitably massive. Luckily,(and belatedly too) users can work around this problem by a combination of drastic measures.

For this device, you can half the display brightness, and set system performance to low or medium to get a fighting chance. The battery can be recharged via third-party USB Type-C adapters or with the parent AC adapter which takes around 2 hours to reach full charge. Overall, this device will give you approximately 10.5 hours of Wi-Fi browsing, or 16 hours idle time, which is pretty decent.

The fans respond as most will to varying intensity of load. They go from purring and fluctuating during processor-intensive tasks like Gaming or programming, to an apparent no-show when faced with low and medium loads like browsing or video playback.

For this device, the area around the keyboard where the processor is housed becomes hotter more quickly for obvious reasons. This is in contrast with neighboring spots like the palm rest, and the click pad which keeps their cool.

Inlets for sucking in air also help to drive away the heat and quieten the whirl of the fans too. In essence, the Laptop is almost always comfortable.

This laptop features the many highs and the little lows of modern premium ultraportables. It is a step-up from the previous offerings but not a good leap. The CPU is impressive, as is the display and the dual Thunderbolt 3 port on the eye-catching, angled “gem cut” edge. Not so much for the GPU, the erratic fans, and those thick bezels that they can’t seem to get rid of.