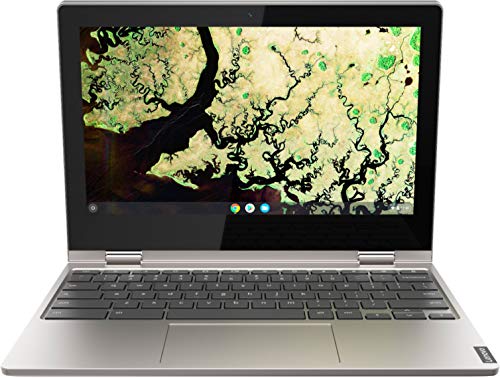 Lenovo follows up the Chromebook C330 with the Chromebook C340, a 2-in-1 convertible that manages to closely resemble its predecessor and look like a significant upgrade to it almost simultaneously. We couldn’t help but notice that some of the less desirable attributes of the C330 manifested themselves in this model, because they jumped out at us right off the bat. Yet, in many ways, the Chromebook C340 manages to distinguish itself from most other Chromebooks in its category, not just its forerunner.

The C340 swaps out its predecessor’s MediaTek ARM processor with a dual-core Intel Celeron N4000 that offers a little more zip between tasks. And next to the C330, this one looks like a rockstar, with the rock-solid build to go with its chic looks. Its ports ensemble is similarly impressive, and a battery that lasts the whole day rounds up this laptop’s collection of charms.

Despite its rose-tinted shell, it’s not all rosy with this laptop. We’ve seen better screens, even on other Chromebooks, and its speakers are even worse than the ones we complained about on the C330. This laptop will not blow your mind with its performance, but, overall, the C340 is a portable, capable convertible that offers excellent bang for your buck.

In the sea of gray and all-white colored laptops, the C340 stands out in a Sand Pink-colored show of personality and flair. Lenovo opted to take the road less traveled with the design of this laptop, a decision that ultimately paid off if the look of this laptop is anything to go by. And if the color pink suggests weakness of any form to you, the C340 sports an aluminum lid that lends the rest of the laptop’s plastic chassis extra toughness. Despite the disparity in the texture of both materials, Lenovo manages to ensure that the color remains constant.

Speaking of color, the C340 is also available in (the more traditional) Platinum Grey, although this model is a bit difficult to lay hands on. Sturdy, 360-degree hinges support transitions between laptop, stand, tent, and tablet modes while also ensuring that the screen remains stable in whichever form it adopts. There is no noticeable flex when you lift the aluminum lid, but the gigantic bezels framing the C340’s 11.6-inch screen took us seriously aback. In fairness, good-sized bezels are necessary for 2-in-1 laptops for when the panel is used in tablet mode, but the bezels on this laptop just looked unnecessarily gigantic.

Moving on to the second half of the Chromebook, a gray keyboard deck is spread out over the plastic chassis. The laptop’s touchpad, also made of plastic, sits directly under the keyboard. The C340 barely tips the scales at 2.6 pounds and measures 0.7 x 11.4 x 8.2 inches, making it pretty compact and portable, even by Chromebook standards.

The C340 ditches an HDMI port (which is one of the features of the C330 that we loved) but makes up for this omission by providing a selection of ports that others can only aspire to. Along this Chromebook’s left flank, you’ll find a USB 3.1 Type-C port, a USB 3.1 Type-A port, a microSD card slot, and a combo headphone/microphone jack. On the opposite flank are the power button, volume control buttons, a USB Type-C port, a USB Type-A port, and a Kensington lock slot.

The USB Type-C ports on either side of the laptop can be used to charge the system, connect to external displays, and transfer files. Same as in the C330, wireless connection is supported by Bluetooth 4.1 and 802.11AC Wi-Fi.

Typing on the C340’s island-style keyboard is a decent if unremarkable experience. The keys are responsive and offer decent tactile feedback, yet they feel a bit shallow, with 1.4 mm of travel, according to Lenovo. Having said that, the keyboard deck feels sturdy, a definite plus in this laptop’s favor given that budget laptops are notorious for their defective keyboards. The absence of backlights is a sore sticking point, though. We’d have appreciated the option that allows us to extend our productivity long into the small hours.

Buttons are conspicuous by their absence on the C340’s touchpad. It’s made completely of plastic, so it is prone to the accumulation of fingerprints and oil patterns. However, it is responsive and accurate, and correctly identifies and interprets Chrome OS’ gestures.

In the same vein, the laptop’s touchscreen works well, managing to keep up when we increased our speed. Some convertible Chromebooks have begun to introduce pens as additional input devices, but that’s a luxury that users of the C340 will have to do without, at least for now.

Laptops seem to count bad speakers as an existential requirement but the C340’s speakers take things to new extremes. Bad would be the term we’d use to describe this laptop’s downward-firing speakers if we’re being generous. The placement of the speakers is unfortunate, but that cannot be the reason for their state, given that other laptops have managed to make similar arrangements work out well. The speakers never manage to fill even a small room with sound, even with the volume cranked up to the loudest. Not only that, audio comes out significantly distorted, with highs reaching whiny peaks and mids comes out flat. There is no bass to speak off.

To get any enjoyment out of this laptop’s speakers, you may need to skip using them entirely and plug in your headphones instead.

The Chromebook C340’s 1366 x 768 IPS touchscreen panel is similar to other panels of similar description. Viewing angles are great, and the screen offers decent to good levels of color fidelity.

All things considered, the laptop’s 11.6-inch screen is solid if unspectacular. It’ll do nicely for streaming videos from Netflix and YouTube, but text and graphics appear pixelated at several points. It’s not the brightest, either, and the highly reflective glass makes it hard to work on this keyboard in brightly-lit rooms, or directly under the sun. Plus, and we’ve said this before, the bezels do not make this screen particularly easy to look at.

Embedded in the top bezel is the laptop’s 720p webcam. The webcam does not take glamorous photos. It is, in a word, passable.

Equipped with an integrated Intel UHD Graphics 600 graphics card, the C340 handles gaming far better than its predecessor ever could, although premium AAA titles are still far out of its reach. At least with this GPU, users can download and play decent games from the Play Store at really good frame rates. This makes a welcome break from the basic stuff that other Chromebooks (the C330 included) forced users to gorge on.

The GPU also gives the system additional pep for a little light photo editing. As long as you don’t try to get too ambitious, this laptop’s GPU is good for all the basic computing tasks you can think of, including light photo editing. We wouldn’t try getting it to transcode videos or render 3D images, though.

Chromebooks tend to post impressive battery performances due to the reduced power of their processors and screens and the C340 is no different. It’s easily a full-day laptop and Lenovo claims that this laptop’s battery lasts up to 10 hours between charges. That figure feels a bit optimistic, but, depending on how this laptop is used, it will easily reach the nine-hour mark, with a few more minutes to spare.

Due to the absence of fans, this laptop remains absolutely silent, even in high-intensity circumstances where fans would ordinarily start spinning. It also keeps its cool at all times, never becoming uncomfortably warm. One factor that helps in this area is the CPU’s low power consumption, even when it’s busy.

The Chromebook C340 is not the Flash or Optimus Prime, but it’s no slouch either. Our review model stows an Intel Celeron N4000 processor, 4GB RAM, and 32GB eMMC storage memory in its slim frame. Another model offers 64GB storage memory and nothing else different. While these are decent specs considering the fact that the Chrome OS does not need a lot of power, the C340 does not blow the competition out of the water with its performance. Sure, there are differences between the Intel Celeron processor and the MediaTek processor in older models, but there’s not such a wide margin between them.

The Chromebook C340 remains a laptop that will work through basic computing tasks (though without being in any great hurry) but appear woefully underpowered when challenged with programs that force it to dig deep. It’s not a multitasking pro, either, preferring to take things one at a time. The laptop seemed to be coping okay when we had only a few tabs open on Google Chrome, but when the number of tasks steadily increased, we noticed a drop-off in the laptop’s general performance.

This laptop entered the crowded Chromebook arena with a bold new look and immediately set about creating a name for itself. Judging by the popularity of the Chromebook C340, we would say that it succeeded in doing exactly that.

Good looking, affordable, portable, and durable, there’s a lot to like about this laptop. It’s only powerful enough for android games and regular computing tasks, but it doesn’t pretend to be what it is not.

We wish the laptop’s screen was better, and the speakers are more likely to inspire shudders than any burst of joy. But for the price this laptop is offered, you’ll be getting a reliable, solid, and ultimately likeable machine.