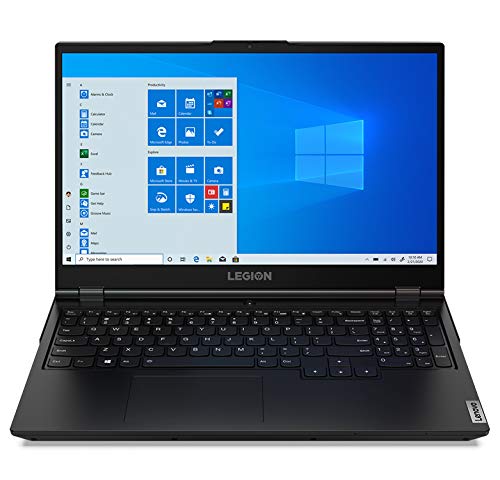 Spurred on by an octacore AMD Ryzen 7 5800H processor and an Nvidia RTX 3070 GPU, the Lenovo Legion 5 delivers a gaming experience that’s pretty close to premium levels, at a much lower price. Yet, it is much more than a gaming laptop. Gaming is its primary trade, but this laptop is savvy in a host of other vocations as well, making it the complete package, or pretty close, anyway.

Solid build, impressive performance, a decent keyboard, good battery performance, and a fantastic assemblage of ports headline the Legion 5’s extensive list of desirable features. On the flip side, the laptop feels overly bulky, the screen could be better, and the webcam is a bit hit and miss. Then there’s the inevitable flexing that afflicts laptops that flaunt all-plastic builds.

What you get with this laptop is a capable gaming rig under 1500 as well as an efficient workstation. Considering the fact that leading laptops in each of these categories cost exorbitant amounts, the Lenovo Legion 5 offers insane value for your money.

Designed primarily as a gaming laptop, the Lenovo Legion 5 does not go out of its way to advertise that fact. In fact, the only design cues that may give this fact away to uninformed observers are the grills positioned at the back of the laptop and its RGB backlit keyboard. Apart from these, we suspect that the Legion 5 will hardly look out of place in classrooms or boardrooms.

The Legion 5 is made entirely of plastic, yet it manages to look and feel solid throughout. It’s gone for a look of understated elegance, and, helped along by its Phantom Blue lid and black chassis and vents manage to pull it off. In case you consider this color configuration too flashy, there’s another model in an even more muted gray and black hue. Rubber feet have been included underneath the laptop to maintain stability during operation.

So far, everything seems peachy, but it is when you lift the laptop’s lid that it gives the first indications that there are a few slight imperfections in its makeup. The 180-degree hinges are pretty solid, and the lid can be opened with one hand. However, the screen flexes a bit, particularly close to the hinges.

The bezels that surround this laptop’s 15-inch screen are not distractingly large, and a HD webcam is nestled in the top bezel. There’s no material shutter for the webcam, but Lenovo offers a mechanism that disconnects it when it’s not in use. Great news for the security conscious. There’s noticeable flex on the keyboard and palm rests as well, although it doesn’t get too upsetting. You won’t fail to notice the lineup of stickers on both palm rests as well. Thankfully, these can be easily removed. Underneath the keyboard is a touchpad that appears oddly tilted to the left, a design necessity to fit in the numpad on the keyboard.

Weighing over 5 pounds, the Lenovo Legion 5 is by no means light. Yet, while its bulk makes it hardly notable, it also contributes to its durability. A fair trade-off, in our estimation.

The Legion 5’s port collection is easily one of its biggest highlights, to us at least. Most of them are concentrated at the back of the laptop. Spread out along this laptop’s rear are 3 USB Type-A ports, one USB Type-C port, an Ethernet port, an HDMI 2.1 port, and the laptop’s power jack. The USB Type-C port here supports PowerDelivery charging.

Wireless connection is handled by Bluetooth 5.2 and Wi-Fi 6.

Great news for the number crunchers, the Legion 5 finds space for a numpad in its keyboard. The numpad keys are smaller than others on this keyboard deck, but the keyboard feels more spacious, perhaps as a result of this. The arrow keys are also slightly isolated from the rest of the unit.

Overall, the keyboard feels really well-built and offers a decent experience to boot. The keys feel great for both typing and gaming, key travel is good, and the keys stay quiet even in the thick of gaming action. The keyboard also offers 4 zone RGB lighting, which is kind of a staple for $600 gaming laptops. The one on this laptop is not quite as sophisticated as the best of them, with limited features and inadequate software hamstringing it a bit. On the plus side, color uniformity is great.

The Legion 5’s plastic touchpad is fairly big and pretty decent. It tracks very well and responds promptly to commands, but it tends to get smudgy and oily pretty quickly.

The downward-firing stereo speakers in this laptop are not particularly great. They’re not loud enough to fill even a moderate-size room with sound even with volume settings maxed out. However, they do reproduce sounds pretty well, particularly the highs and mids, which come out alright. There’s no bass to speak of, however.

The Legion 5’s 15.6-inch panel is perfect for gaming, but with little improvements in a few places, it could have been excellent for content creation at the highest level as well. As it is, though, there’s little to complain about this screen.

Its 1920 x 1080 pixels resolution, coupled with a refresh rate of 165Hz encourages a superb gaming experience. It’s also pretty bright (at 320 nits) and viewing angles are good. It’s when it comes to color accuracy that the Legion 5’s IPS panel underwhelms. It covers 97 percent of the sRGB color gamut and 70 percent of the Adobe RGB, with a decent Delta E rating of 2.39. Indeed, these results are great for most computing operations and multimedia functions, but if you have designs on photo or video editing, you’ll find the Legion 5’s panel disappointingly lacking.

The color temperature of 7809K is not the best as well, and the contrast ratio of 713:1 tells the same story. It’s all a bit disappointing that the panel doesn’t get an upgrade across several different configurations of this laptop, as content creators would have been willing to pay more to see it happen.

The Nvidia GeForce RTX 3070 GPU that comes in this laptop offers 8GB of memory and 5120 stream processors, and it runs at 130W. It’s described as an upper mid-level GPU, meaning it’s more than capable of playing high-end games, including new AAA titles, at good frame rates. Apart from that, the GPU also gives the laptop enough oomph to tackle most content creation tasks and execute them with remarkable aplomb.

Some computer games place more strain on the laptop’s CPU than GPU, and it is with these types of games that the Legion 5 may struggle a bit with. Having said that, the latest and greatest game titles and eSports games will run smoothly on this laptop without your having to tweak your settings. For hardcore gamers, you can even get this laptop to perform ray tracing.

Gaming laptops are not famed for their battery performance, but the Legion 5 actually does a reasonably good job in that department. In our benchmark tests which consist of Word processing with Wi-Fi and media playback and brightness tuned at about 70 percent, the Legion 5 lasted a little over five hours before conking out. However, when we toned down all settings, activated Best Battery Mode, and kept the laptop in idle mode, the battery 80W battery lasted over ten hours. That makes this laptop an all-day device.

Gaming is a different story altogether, and the battery gave out a little more than 2 hours later. For a longer-lived, and ultimately more satisfying gaming experience, you may need to park close to a power outlet.

Gaming takes a heavy toll on a laptop’s internal components, and overheating can become a real issue very quickly. Thankfully, the Legion 5 stays relatively cool even in the thick of gaming action, and it is thanks to its combination of fans, heatsinks, and heatpipes.

The fans remain active throughout, but for the most part, they are so muted that you can hardly make out their presence. When you start gaming, their pitch naturally increases, but not so much that the noise becomes unbearable. Remarkably, the laptop never gets too warm, even during sustained periods of intense gaming. Though, in this case, as well, temperatures rose immediately we started gaming.

The Legion 5 is offered in several configurations. Our review model packs an octacore AMD Ryzen 7 5800H processor, an Nvidia RTX 3070 GPU, 16GB of RAM, and 512GB NVMe SSD storage memory. Other models are equipped with an Intel Core i5 CPU, while RAM and Memory space can be upgraded up to 32GB and 1TB respectively.

With base and boost speeds of 3.2GHz and 4.4Ghz respectively, our review model passed our benchmarks in flying colors. The fact is, the Lenovo Legion 5 is overpowered for regular computing and office tasks. It’s also a champion multitasker, able to cycle through multiple open Chrome tabs, with a spreadsheet and other programs running in the background, and it didn’t break stride.

The AMD processor and RTX 3070 GPU combo also give this laptop enough oomph to execute most content creation tasks including video transcoding, photo editing, and 3D image rendering without fuss. In terms of gaming performance, our review model delivered impressive results. It ran Horizon Zero Dawn at 69 fps, The Witcher 3 at 60 fps, and Battlefield V at 88 fps. It did struggle a bit with Cyberpunk, only reaching 44fps, but most laptops struggle with it as well.

The Lenovo Legion 5 is an upper mid-level gaming laptop that’s offered at a pretty interesting price. It offers those qualities most people want to see in any laptop: a decent combination of power, performance, and affordability. Fully capable of delivering an excellent gaming experience, this laptop tops it off by also providing remarkable content-creation qualities.

For the price it’s offered, we’re willing to overlook its bulk, grainy webcam, dull screen, and inadequate speakers, even though we would have been willing to pay more for a better panel. Apart from those, the Legion 5 makes no further concessions, and even those flaws can be seen in some much pricier premium laptops.

It’s up to you to decide if you can live with those imperfections as well. But you do not have to be Ebenezer Scrooge to look for bargains and when it comes down to it, the Legion 5 is exactly that.