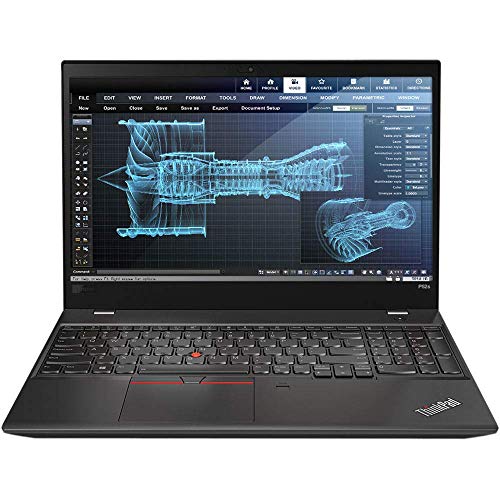 The Lenovo Thinkpad P52s is one in a not-so-long line of so-called “Ultrabook workstations”. It still adopts the winning formula of its predecessors, as evidenced by its design and input devices, and then goes a step further. Its 8th generation Intel Core i7-8550U Quad-Core Processor is remarkably energy-efficient and powerful, not so much for its graphic processor.

Lenovo laptops adopts the ”less is more” approach in the design of their Thinkpads and their latest rollout, the Thinkpad P52s does not buck the trend. The slick, black exterior is made from glass-fiber reinforced plastic.

The build follows the classic lunchbox pattern that distinguishes the ThinkPad. The iconic ThinkPad Logo is a constant fixture at the top left corner and features the glowing dot just above it, as well as an embossed Lenovo logo in the bottom right.

The ThinkPad P52s is stocked full of ports, and there’s even provision for more, with the presence of its proprietary docking connector. The lineup is as follows; to the left are two ports for the Thunderbolt 3 port and the docking connector/Thunderbolt 3 port and to the right side, a secure lock slot, an RJ45 port, an HDMI port, two USB 3.1 ports, a memory card reader and a headphone/microphone jack.

As expected, the keyboard does not disappoint, with its sizable keys spread island-style over the keyboard. The LED backlight accents the keys as much as the red light does to the pointing stick and its accompanying discrete mouse buttons.

The keyboard features a number pad, and its keys give satisfactory feedback with moderate travel distance. To the right of the 3 9 × 2.7″ touchpad, a fingerprint reader is located. The touchpad is smooth to touch and very responsive, recognizing all Windows 10 gestures.

The ThinkPad is shipped in two versions of LCD resolution, the 4K or Ultra HD display(3840×2160p) and the Full HD display(1920×1080p). They both use IPS technology in their operation and have matte surfaces. Our review laptop is based on the Full HD resolution display, with a brightness of 250 nits and a contrast ratio of 700:1.

The display is generally satisfactory, colors are bright and images are vivid, with minimal graininess when the screen is viewed at very close range. The outdoor visibility is impressive except in sunlit areas.

Further checks show that the display can only manage 61% of the sRGB color space which doesn’t bode well on its image processing capacity. On the issue of bezels, this laptop can still do better as the chin bezels are disproportionately thicker than the other sides.

As the ThinkPad P52s has its stereo speakers placed on the bottom of the base unit, the sound quality is negatively impacted. This positioning is not exactly ideal for audio quality, especially when the laptop is placed over cushioned surfaces when the audio is muffling at worst. The speakers seem to prioritize volume over sound quality.

The Nvidia Quadro P500 is its biggest weakness, surprisingly so given that it is a constant feature of all versions of the P52s. It is a downgrade on the NVidia GeForce MX150, and that is not an enviable position.

The ThinkPad is given a very generous supply of battery power. The battery runtime is an incredible 16 hours of real-world Wi-Fi browsing, which is better than the T580 by half. It is helped in no small part by a feature known as the Powerbridge.

The powerbridge combines fixed internal battery power(32Wh) with an external hot-swap battery of variable capacity(72Wh for this Laptop) to give a massive power bank(104Wh). The downside to this feature is the extremely long charging time, but we can all agree that it is worth the wait.

You might want to avoid placing this laptop on your lap whenever you’re engaged in some heavy lifting. At this point the hotspots become visible and the fans can reach a peak noise level of 37.5dB(A). The relatively high frequency, other than the loudness-or lack of it, in this case, is the worrying issue here. At lower loads, the fans nearly always kick in and the hotspots are unnoticeable, while idling they simply shut down.

For this laptop there are two simple choices, stick to older games if you want optimum performance or play newer games at very low details and resolution. This is a real bummer for some of us, the stick goes to the Quadro GPU that is simply not wired for gaming.

The processors in this laptop have contrasting performance levels but similar energy efficiency. The Intel Core i7-8550U processor with its four cores can reach a turbo clock rate of 4GHz and is an Ultra-Low-Voltage processor. This GPU is as fast as it is smooth and will mostly take on intensive tasks without hitting a snag or lagging incessantly. Benchmark tests have consistently shown that this processor performs satisfactorily. It is not spectacular or as fast as the Kaby Lake Refresh processor, the Core i7-8650U but it still holds its own.

The Lenovo Thinkpad P52s, with its mismatched processors and unmatched battery power, is still a fresh breath of air. Its Quadro P500 graphic processor is, unfortunately, its biggest drawback, while its remarkable energy efficiency is unarguably its biggest draw, but the design is equally impressive. Its input devices are still top-drawer, and the generous provision of ports will always be a bonus.

The bigger and better battery comes with some benefits and some baggage as well in the form of its long charging time, but it is still a reasonable price to pay.