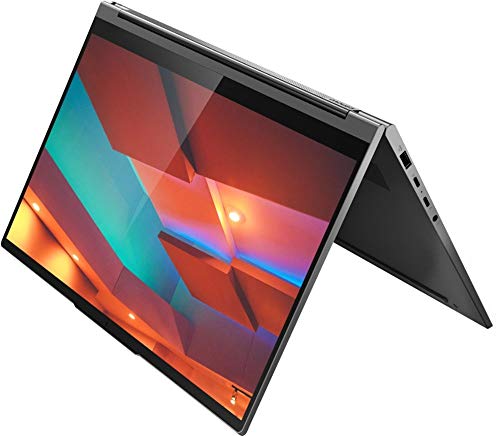 The Lenovo Yoga C940 is a lot of things, thanks to its convertible design. In tablet mode, its 14″ touchscreen can pass for a canvas, and its stylus, a paintbrush. And in laptop mode, its 10th Gen Core i7 processor can power through all your productive endeavors with speed and sinew.

In between pivoting the lid through a full circle flip for a quartet of viewing modes, the hinge adds another string to its bow, an expanse of speaker grilles. This provision is responsible for the resounding audio that results, and it offers up some of the very best sounds that you’ll ever get to hear from a convertible device.

It can also count an enduring battery and a gorgeous display among its biggest strengths, more so as it can come in a 4K display configuration.

There’s no provision for an SD card slot or a primary video output, and its native 1080p display is not the brightest. But there are plenty of other positives inside of its premium chassis to offset these shortcomings, and to justify its price tag too.

While the lid is pretty plain, save for the Yoga brand name that is etched at the top corner, there are plenty of highlights to note as soon as you flip it open.

For starters, the “reverse notch” provision offers an outstretched arm, or a protruding lip, with which you can easily flip the lid.

And then it also houses a 720p webcam that lacks support for Windows Hello enabled face recognition, while still sporting a color bar that glows red at the slide of its privacy shutter.

Then there’s the hinge, a continuous strip of metal that is rigged with speaker grilles almost all across its entirety, next to the engraved Lenovo brand name. This “sound bar” hinge can also turn about a 360-degree arc, effectively and effortlessly flipping the laptop across a variety of viewing modes in typical Yoga fashion.

As for the laptop as a whole, it is of a strictly aluminum build, with color choices of a deep “Iron Gray,” or a lighter, silvery gray so-called “Mica” visage.

And with a weight of 3 pounds along with a thickness of and 0.6 inches, it is relatively portable, maybe a little less so when pitted against the XPS 13 2-in-1 (2.9 pounds, 0.5 inches). It is pretty sturdy too, giving away very little in the way of flex as you press all across its parts.

The shortage of ports is perhaps one of the biggest challenges that users of this laptop will be faced with. What you get is a USB Type-A port and two USB-C ports with Thunderbolt 3 support, in addition to a headphone/mic jack, all of which are sited on the left side.

At the right side of the laptop is a power button, leaving behind a vast expanse of un-utilized space. And it further serves to make the omission of an SD Card slot from the lineup even more difficult to understand.

On the wireless communications side of things are the Wi-Fi 6 and Bluetooth 5 options.

The island-styled, backlit keyboard sports keys that are sizable and slightly curved at the bottom part, fitting for a firmer finger hold.

And while the haptic and aural feedback that they give is quite something, the force of actuation that is required to effect a click will carry a bit more weight than usual.

You can also factor in key travel that is sufficient on the button, considering the limited headroom available, as well as an ample key spacing that is suitable for all hands on the keyboard deck.

Then there’s a very well polished touchpad with a 4.1 x 2.6-inch footprint that inches very close to the lower part of the keyboard deck. It will respond in the snap of a finger, or a couple more, to all windows 10 gestures. But it is a little let down by an unevenly distributed click pressure across the entirety of its surface.

Fitted snugly into its garage at the rear is the stylus, with a girth that is the most slender of its ilk. It will come in handy, and perhaps a little less grippy too while jotting down notes on OneNote or drawing with Paint 3D.

The touchscreen also gets top marks for its responsiveness and sensitivity, to the flick of a finger or the glide of the nib.

At the laptop’s hinge is a built-in speaker grille that houses two speakers, and they work in conjunction with two downward-firing woofers to deliver an impressive sound output.

The sound bar hinge, as it is so-called, will roll out sounds that face the viewer at any viewing angle. And it ordinarily makes for minimal distortion and much more enhanced clarity in the quality of the sounds that emerge.

It is hands down one of the most impressive audio setups that we’ve seen on a laptop, even better than that of the Dell XPS 13 2-in-1 and Spectre x360 13.

This laptop’s display comes in choices of a 1080p version or a 4K panel option, and they are markedly different from each other, in pixel count and picture quality among other things. While the former, with 1920 X 1080 pixels will create a less striking and colorful display than the 4K panel(3840 X 2160), it will make for a pleasant view, and at a much lower cost of battery power too.

At a little above 400 nits, the brightness of the 4K panel outshines the 1080p version, with its 363 nits level, in turn, falling just short of the 365 nits industry-wide standard for its class.

Then there’s a measure of the color coverage as per colorimeter tests, with the 1080p display’s coverage placing at around 104% and the 4K model at 139%.

What both of these display iterations possess in common is a glossiness that should ordinarily pose an outdoor visibility challenge, but that in itself is not much of a sticking point.

This is so as both models are bright enough to compensate for the seeming blur that is created by reflection from external light sources, as with sunlight. Another shared trait is their capacity for seamless photo-editing.

The Lenovo Yoga C940 employs an integrated graphics card- the Intel Iris Plus Graphics G7, for its graphic demanding applications.

With this graphics card, users of this laptop will be able to apply lighting effects and a couple of filters to photos with Adobe Photoshop.

It can also make a good run at a number of light games, or even heavier games with a couple of concessions, some of which are drastic too.

You’ll only ever meet with lags when you attempt to render 3D graphics for extended periods, or when you play games with screen resolution and graphics details set to the highest level.

Gaming under 1500 dollars is very much possible with this laptop, as long as you can settle for lower resolutions while making sure to peg back the graphics detail by a notch or two.

Even then, you’ll still struggle to hit fairly comfortable frame rates for the biggest games on offer. Titles from the Tomb Raider and Witcher franchise will be a mile too much for asking.

You can stand a decent chance with other less demanding titles, League of Legends, Overwatch, and the likes, at 1080p, and graphics details set to medium or high.

Long-lasting batteries are a sure thing with the Yoga line of laptops, and it is even more remarkable when you consider the relatively smaller headroom that they possess.

In both the 4K and 1080p iterations of this laptop, the runtimes that are posted will better others in its 2-in-1 utility class and price class, from the Dell XPS 13 to the HP Spectre x360.

While the 1080p model will last for a minimum of 11 hours with Wi-Fi-based web browsing at a brightness level set to 150 nits, the 4K model will breathe its last airs at about 4 hours earlier. It is a decent time frame for the latter, especially when you factor in its power-guzzling glut of pixels.

The fan is largely well-behaved, true to type with the typical Yoga rollout. It flies below the radar while the system is idling, and will come out of hiding when the system is subjected to load. Coil whine is passable too, and can only be perceived by hearing the grasses grow.

As for the system’s temperature, it is within tolerable levels at the top parts of the laptop than for the bottom parts. This is most especially for the 1080p model than for its 4K counterpart, for fairly obvious reasons.

Video playback with the 4K model will give rise to a rise in temperature beyond the comfort threshold at the bottom of the laptop. It will initially be warm as toast, and then uncomfortably warm in a short while, your cue to reach for a desk or a cooling pad.

With four cores and a base speed of 1.3GHz, alongside a turbo speed of 3.9GHz, the Intel Core i7-1065G7 processor inside of this laptop is near the top tiers of the power spectrum.

What this processor lacks in size and heft, seeing as it has to fit into a convertible, it makes up for in a quad-core powered performance that handles the pressure of workloads with ease and haste. And with a Hyper-Threading capacity to boot, it will avail users of this laptop with the provision of multitasking to great lengths.

There is sufficient backup too, in the form of 12GB or 16GB of RAM for the base model and 4K model respectively. And there’s sufficient storage provision to pool from, 477 GB for starters, or 512 GB as with our review piece, enough to plow through system tasks with promptness and aplomb.

This laptop will make smooth sailing of a sea of Chrome tabs, some of which include a couple of hi-res video streams on Netflix, and another, a picture editing session on GIMP or a stylus-inspired spree on Sketchpad. And while at it, lags and other spoilers will put in a no-show, perhaps until you throw a game into the ring.

The Lenovo Yoga C940 tows a slightly different path in some of its design provisions, but its performance level has not dropped a notch since its predecessors.

Its speakers slot into a vantage point at the hinge, and then its webcam and the included stylus pick choice slots, although it counts for very little for the latter two. Other highlights include a gorgeous display, the impressive staying power of its solid build and its solid battery, as well as a powerful processor performance for the most part.

Its major flaws include a paucity of ports, the puny stylus, and its complex parking lot, and most people I know would take a face recognition feature over a privacy shutter for their webcam.

And while It is priced a little on the high side, the price feels just right from the look and feel of things.