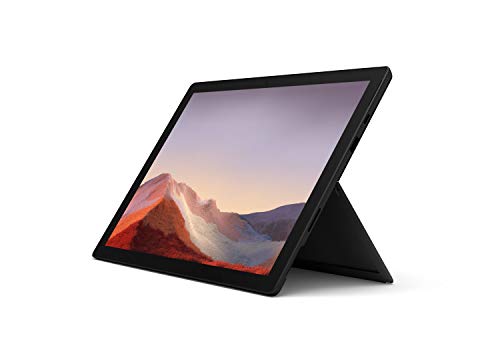 Microsoft’s Surface Pro 7 is a 2-in-1 detachable Windows laptop that is pretty impressive overall, despite its obvious flaws. Its corei7 processor on the Windows10 operating system provides a powerful performance that is unfortunately limited by its not too impressive battery. If you can look past that, there are a couple of positive takeaways from this device, especially if you feed off CPU-intensive apps.

The device has a touch-friendly screen with an impressive display that combines a perfect mix of color, shade, and texture, making it a top pick for creative professionals.

Our Complete Review of The Microsoft Surface Pro 7

The Surface Pro 7 is an ultraportable convertible device that is as elegant as they come. Its chassis is a magnesium alloy build and comes in color choices of platinum grey or black. It is extremely light for a 2-in-1 device, weighing just 1.7 pounds or 1.74 pounds (minus the type cover) depending on the intel processor in use.

Its 12.3-inch touchscreen displays with a 2736 x 1824 resolution and a 3:2 aspect ratio which makes it as clear as day. The display still poses its users with those thick bezels that may make you cringe, but that is the worse part of it. Microsoft can look no further than the Dell XPS 13 2-in-1 to find inspiration for displays with barely-there levels of bezel litter and we’ll be the better for it.

Much like previous surface rollouts, the Microsoft Surface Pro 7 features an ensemble that includes a stylish key stand, a 12.3 ” LCD screen on its detachable keyboard, a Type Cover, and a surface pen.

As the device is detachable, it can be used as a tablet, helped in no small part by the siting of its core components inside the touchscreen. The surface pen was designed for this purpose, with a gilt edge that glides over the touchscreen with exactness. The kickstand unfolds from 0 to 165 degrees to give the user a choice of different viewing angles and stable support for the display.

It comes fitted with a microSDXC card slot, one USB-A, and one USB-C port. The USB-C is a tie-breaker, even though we could finally do with the Thunderbolt 3 port. It also features a rear 8mp camera, a 5mp, 1080p webcam in addition to the Windows Hello camera which employs infrared sensing tech to enable facial recognition. You can also find a headphone jack in this device as well as a Surface Connect plug for charging the device.

The Keyboard is easy to the touch, with sturdy, sizable keys that possess springy feedback and a decent key travel distance that makes for quick typing. The trackpad makes up for its small size with a smoothness and an impressively quick response. The Type cover is suitable for its convenience and is designed for the quickest of fingers.

The wrist-rest, meanwhile, provides a comfortable cushion that improves the overall typing experience. The Surface pen is equally impressive, with precision and tilt to go with its copious fill of pressure levels,  making it a perfect pick for making artistic impressions on the touchscreen.

I used it to take down quick notes on sticky notes from my morning YouTube baking class, and I did not skip a beat. It fastens to the left portion of the screen utilizing a magnetic mechanism. The pen is versatile as well, it provides quick shortcuts to pre-programmed applications, either by long pressing or short clicking on its designated button.

With a brightness that peaked at nearly 400 nits on our light meter which is a relatively decent average, the Surface Pro 7’s 12-inch, 2736 x 1824 display is clear as day.  It is suitable for outdoor use, though you might want to avoid too much sunlight. It also reproduced a solid 97% of the sRGB color gamut but came short of the 139% posted by the Pro 6.

The images produced by this display are stocked with just about the right amount of sharpness and contrast to keep you glued to the screen.

The device’s Omnisonic Speakers with Dolby Audio support might not have the loudest pitch, but they just about hit the mark. As the volume is not spectacular,  the 3.5 mm headphone jack will come in handy. The HD cameras and far-field Studio Mics will make for satisfactory video calling.

If you can ignore the volume shortcoming, then you can enjoy the smooth and refined sounds that emanate from the speakers.

The Core i5 and i7 versions of Intel’s new CPUs significantly enhance graphical performance, although it admittedly comes at a price. Digital artists and other creative professionals find considerable value in this 2-in-1 as it comes with a powerful Intel Iris Plus Graphics GPU. This extra power translates to more robust media streaming, effective Multimedia editing, and even a more enjoyable gaming experience.

It enjoys a healthy 15% improvement in performance over the Surface Pro 6 version when both devices are subjected to the Cinebench graphics test.

With the introduction of the integrated Intel Iris Plus graphics to this system, a lot of games that would be ordinarily unplayable in the pro 6 can now be enjoyed. At frame rates set to 1080p, Users will play games like Rise of the Tomb Raider or Fortnite without trouble. This device might not give you an immersive gaming experience like the XPS 13 2-in-1, but you will enjoy the graphics and gameplay.

The Surface Pro 7 Is powered by a 10th Gen Intel Core processor, a novel 10-nanometer(10nm) processor that possesses remarkable speed and power.

This CPU can handle a load of processor-intensive applications without breaking its stride. I attempted to cripple this device by opening a slew of chrome tabs while simultaneously running several heavy applications including adobe photoshop, outlook, slack, and triller.

The results were impressive, the laptop did not give even the slightest hint of a slowdown and continued in its normal working conditions. Multitasking has become much easier since the advent of the cutting-edge processors that Microsoft Surface releases enjoy.

The Intel Core i5-1035G4 CPU  and 8GB of RAM to boot Is impressive. The Pro 7 performed similarly well on benchmarks, scoring a strong 17,225 on the Geekbench 4 general performance test.

The starting storage space for this device is pretty low for a device of its power and quality(128GB). Add that to the fact that this device does not come with a removable SSD, and you get a real bummer. However, as is the norm nowadays, Microsoft has made a variety of higher-end configurations available on purchase. These memory upgrades will set you back by a few bucks, but it is value for money.

The battery is the spanner in the wrench of what is ordinarily a terrific device. Microsoft seems to sacrifice battery power for processor performance with this device. It does seem like a heavy price, but that would be greatly exaggerated. Its battery still packs about 8 hours in its 43.2wh reserves. You might consider staying very close to a power source if you are going to work for an extended period.

What is more surprising is that the Surface Pro 6, its direct predecessor, has a stronger battery as a couple of tests prove. For example, the device posted 7 hours and 52 minutes of Wi-Fi web browsing which pales in comparison to its predecessor, the Surface Pro 6 (9:20) and the Dell XPS 13 2-in-1 (10:57). Users looking to get more battery life can opt for the Surface Pro+.

While the laptop will mostly never be too hot to handle, it does pose some peculiar cooling challenges. It comes fitted with fans that make their presence felt by the noise they generate, especially when running processor Intensive applications or when connected to a 4k monitor. However, the laptop will not become uncomfortable to use, as the fans are quite effective in keeping the system cool. The Surface Pro 6 just edges its successor in this regard, as it keeps its cool and quiet better under sustained workload.

The Surface Pro 7 is a device that divides opinions across board because of its one key compromise. It might not ordinarily seem like an upgrade on the Surface 6, but if you look closely enough, you’ll find out that this 2-in-1 possesses some stand out features like an amazing display, an efficient type cover, stronger CPU, and GPU…and let’s not forget the USB Type-C port that is both timely and versatile.

On the Surface Type Cover