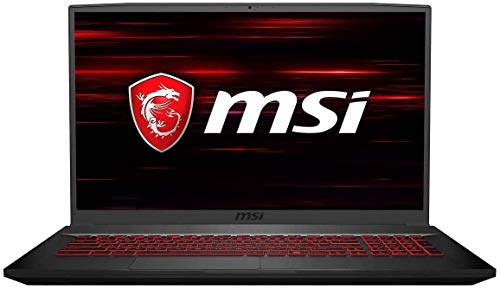 A vast majority of contemporary gaming laptops are as notorious for their cut-throat prices as they are for their battery handicap. The GF75 is offered at budget class pricing by gaming laptop standards, while the hardware under the hood is no less tailored for the thrills of top-class gaming.

The 9th generation Core i7 processor is complemented by the exertions of an effective cooling system, with the all too familiar baggage of fan noise in hot pursuit.

It gets a build that is as stylish as it is slender, true to its name, as well as a decent big-screen display that will catch your eyes at every turn. And while the NVIDIA 1650 graphics card does not exactly put the gloss on its gaming laptop status, the performance of the battery will leave you in no doubt.

Apart from the brushed aluminum lid and the drop-down hinge that pivots it, the design of the MSI GF75 Thin is cut from the same cloth as a couple of its predecessors. The swivel of the hinge gives rise to a slightly raised keyboard deck that allows for the inflow of air through the litter of vents at the bottom of the laptop.

This uplift also sets up the keyboard for typing, although it could also make some of the keys feel more hollow than the others. It is probably caused in no small part by the thinness of the chassis, which can just as quickly go from a selling point to a sticking point.

On one side of the divide, the relatively small profile of this laptop makes it look sleek and easy to transport, but it also makes it more susceptible to the creep-in of flex and the dissipation of heat. While the flex problem is tempered by the slight recess of the keyboard deck, the surfeit of vents that fan out at the bottom, and the provision of a sophisticated cooling system serves to keep the heat at bay.

At 4.85 pounds, this laptop comes out tops when weighed pound for pound with a majority of other gaming laptops in its form factor class, such as the Razer Blade Pro 17, making it top-shelf for nomadic gamers.

There are four USB 3.0 ports in the lineup, three of which are Type-A ports in addition to a 3.2 Type-C port. Other provisions include the RJ-45 port and an HDMI port. While the latter will allow output to external monitors with better resolutions, such as a 4K screen, it will not quite measure up to the high refresh rates that are possible with connections made via the MiniDisplayport.

Although it is becoming almost commonplace for modern laptops to come without optical drives, it is still hard to come to terms with the omission of an SD card slot in this device.

As for wireless connectivity, the GF75 does not go out of the ordinary with its field of selection. The Wi-Fi 5 and Bluetooth 5 features are not exactly rated for five-star performances, but they will suffice for all your regular connectivity needs.

While your eyes will not get to feast on the red carpet treat that is served up by the Per-Key RGB backlight of the MSI GE75 Raider, the red backlight on the GF75 is still brilliant. It accents the red fonts on the keycaps with a certain type of chic that is difficult to miss, even in dimly lit settings. The keyboard is centered on the laptops’ deck, featuring keys with significant travel and feedback, as well as a Numpad for good measure.

The hinges slightly prop up the deck as the lid opens up to full stretch, setting up the keyboard with a teeny uplift that bodes well for the feel of typing. Under the intense pounding of your gaming endeavors, the keys will not buckle or get stuck when they bottom out.

On the other hand, the matte black touchpad is not in a bad place, especially as it has to drop down the deck as a result of the choice of keyboard site. It is smooth and decently sized, bereft of mechanical buttons, and replete with sensors across its entirety. Its frictionless surface makes it easy to navigate around, and it responds in a flash when you click on any part of its flat coverage area.

The built-in stereo speakers are sited around the front corners, where they should ordinarily have sufficient clearance to pack a punch. And while they do not necessarily punch above their weight, as evident in the intensity of the bass, they do not punch too far below. Volume is plenty loud, while the mids and highs are punchy.

And with the Nahimic 3 software, the power to tweak the sounds to suit your style is in your hands. You can customize the sound setup to go with the flow of gameplay, and perceive every shrill and boom of the action. And when you plug into headphones, the in-game experience becomes even more immersive.

With 1920 x 1080 pixels filling out around the vast expanse of the 17.3″ display, the visual experience is pretty much decent for the most part. And with the slim bezels at the borders of the screen building on the ample screen real estate, an 88% screen to body is the resulting estimate, superb by all accounts.

There’s an IPS level panel, making for a display that is visible in a variety of viewing angles, and a 120 Hz refresh rate that is just what was ordered.

During gameplay, the visuals that are projected will turn out with sufficient color and clarity, nothing too splashy, but just enough to catch the eyes. And when you settle down to videos on YouTube or Netflix, you’ll not roll your eyes at the sight of the display that pans out.

Graphics performance is not exactly the biggest strength of this laptop, neither is it a position of weakness. What with the NVIDIA GeForce GTX 1650 Graphics on duty, and its base speed of 1410 MHz on the offing.

It meets up to, and even slightly surpasses the basic requirements for a host of intensive tasks that users of this laptop will most certainly be involved in.

The first on the list is gaming, and the GF75 delivers decent returns in terms of frame rates for some of the biggest titles on offer, albeit with some little tweaks every here and there. Content creation comes a distant second, and our review device is quite as fairly adept at rendering high-res details as it is at 3D simulation.

It will break a couple of sweats at the height of the action, but it will most likely never leave a trail of hotspots in its wake.

Gaming is the first port of call for users of this laptop, so it is only fair that it delivers on that front. And it delivers as promised, especially with the DirectX12 support of its graphics card, the GeForce GTX 1650. For a majority of the biggest names on the roster, your safest bet would be to play at native resolution(1080p) and settings other than high or ultra.

From Borderlands to the Witcher and the Rise of the Tomb Raider, the figures that it posts for frame rates are decent, making for smooth and enjoyable gaming.

Titles like Metro Exodus will even go a couple of notches higher, with the former peaking at 60 fps at High settings and the latter approaching 85fps.

The GF75 is a budget gaming laptop, so without mincing words, the performance of the 3-cell, 51 Whr Li-Polymer battery on this laptop is nothing more than was expected. While Wi-Fi-based tests place the timespan around four and a half hours of operation, 1080p gaming is a different kettle of fish.

More concerning is the fact that It takes nearly 2 hours for this laptop to go from 0% to 100% charge.

And while the slated 7-hour runtime that is claimed by the laptop maker is not exactly one to be bandied around, the statistic comes with some caveats that border on the settings employed and on the programs in operation.

This is even as the in-house Dragon Center is hardwired to temper with the gaming performance of its host laptop when unplugged.

Powerful enough to keep the heat away at all times, loud enough to constitute a nuisance at times, that is the fan setup in our review laptop at a glance. With two fans and four copper pipes distributed evenly between the processors, the cooling operation of one ensues independent of the other, a relative rarity for laptops of such modest pricing.

This arrangement helps to keep the thermal situation in check, especially when they join forces at the thick of computing. The side effect is the disquiet that results, and it is even more pronounced when the cooler boost profile is activated via the Dragon Center software.

You’ll not necessarily have to flinch at the contact of your body parts with the laptop. The hotspots that hardly ever emerge are at arm’s length to high traffic parts of the laptop, as with the palm rest and the undercarriage.

While the 9th generation Intel Core i7-9750h processor on this laptop does not exactly make massive gains on its predecessor, the Core i7-8750h of the GF75 8RD, there is just about enough to separate them.

With six cores and a dozen threads on the processor, joined by 16GB of DDR4 RAM and a 500GB NVME storage drive, this laptop will meet with very little difficulty in executing regular system tasks and much more.

The GF75 is primarily a gaming laptop, but it will not look out of place in a regular office setting. There is more than enough gas to power through office productivity tasks, as with word processing, data computation, and CAD designs. This laptop is also a good sport for multi-tasking, much like the GF65 which runs on the same processor.

You can jot down notes from Youtube lessons while darting across more than two dozens of tabs on the Chrome web, and the laptop will not disapprove with lags or stutter.

And with cooling systems each for the GPU and CPU, you can split the screen and throw in the Witcher 3 into the mix, but that is the point when things start to take a drastic turn. Things start to get heated and the fans get all worked up for a while until normalcy is restored.

The biggest appeal of the MSI GF75 is its big-screen display at 17.3″, and it is easy on the pocket, as far as budget gaming laptops go.

There’s a 9th Gen Core i7 processor in the mix and a cooling tech that gives it an edge as well. If you consider the omission of a Thunderbolt port and the SD card reader to be a turnoff, then you probably have not checked out the battery life.

But if you need a gaming laptop that you can easily lug around, and you’re not exactly big on budget or battery, then you should check out our review laptop.