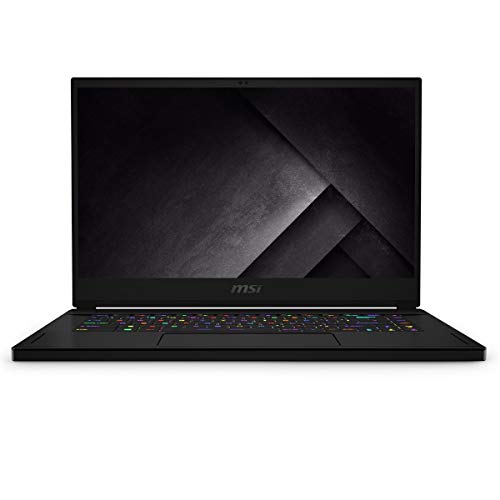 Gaming laptops have a well-documented fondness, some might even call it notoriety, with rugged and husky frame builds. And the MSI GS66 Stealth 10SFS-032 is one in a long line of gaming laptops under 1500 from the MSI stealth line that seeks to change the narrative.

It does so without making any concessions that compromise the quality of its hardware and the computing performance of its laptops by extension.

With simple looks that ooze sophistication still and a frame that is as lithe as it is light, this laptop steals a march on the raging competition with the looks and feel that will appeal to many.

It is even much more of a doer than it is a looker. Under the hood, there is a powerful 10th Gen Core i9 processor and an equally impressive Nvidia RTX 2070 Super Max-Q graphics card from an exciting array of configurations.

And when you get down to the business of gaming, you’ll need no further convincing as to its gaming credentials. Although you’ll have to deal with the baggage that comes with the package too.

The GS66 has been through a considerable degree of touch-up since its predecessor, the GS65. This much is evident in a sturdier build that probably stems from a slightly bigger profile. A pitch-black visage stretches in a vast expanse from the metallic lid to the bottom parts and the keyboard deck, only punctuated by the brilliant per-key RGB lighting on the latter.

MSI pays rapt attention to the ventilation of its gaming laptops, with the generously sized grill area in front of the keyboard seeing to that effect. A couple of vents at the rear and one each at either side of the deck also serves to eject hot air from the internals.

On the whole, this laptop does not particularly give off the gaming airs that you’ll find on the typical MSI gaming rig. It is sleek and relatively slight, perhaps in living up to its name, but it is what lies under the hood that makes a world of difference.

The Thunderbolt 3 port in this laptop can be used as a means of charging and to connect with external display monitors and storage devices, more so in the absence of an SD card slot as with this laptop. And with three USB Type-A ports and a USB Type-C port joining in the lineup, the GS66 looks to be very well stocked for ports.

Other provisions include ports for the HDMI-2.0, an audio jack for the headphone and microphone combo, and the RJ45 LAN. You can always count on the impressive speed and range of the Wi-Fi 6 for all your wireless connectivity needs. While Bluetooth 5.1 rounds up the ensemble.

From the top to the bottom of this chiclet keyboard, every single component is geared towards optimizing it for the thrill of gaming. From its relatively robust base, the significant travel and clicky feedback of the keys, to the full-sized arrow keys and the star of the show, the per-key RGB backlight, the keyboard gets a lot of things going well for it.

Some small details will take some getting used to, none so much as the shared insert and delete function key and the off-center relocation of the space key. But once you learn to work around these small niggles, then you’ll be good to go.

As for the touchpad, it gets a glassy surface and a horizontally leaning footprint. Without the provision of dedicated mouse buttons, the surface can be relied on for the registering of clicks. It is very responsive to a wide range of inputs from the multi-touch gesture catalog, and the feedback that it gives upon being clicked is quite striking.

On paper, the audio of the GS66 could possibly do no wrong with the combination of the Dynaudio speakers and the Nahimic Software as the brawns and the brain behind the sounds that roll out. But in reality, the quality of the sound output is not particularly impressive.

You can find the speaker cutouts at the extremes of the palm rest on either side of the touchpad. It is not exactly the most generous speaker size allocation on an MSI laptop that we’ve seen. The sound is not big on bass, although the volume is pretty decent. You can always resort to the use of headphones to get a better deal.

It is hard to look beyond the stated 300 Hz refresh rate on the sticker, although it is even harder to notice the impact that it makes in comparison with the lesser 240Hz configuration. It is safe to say that there is more to the display of this device than meets the eye.

One thing is for sure however, the Full HD resolution makes for impressive clarity and vibrancy of the display, while the IPS panel makes sure to enhance visibility away from the center of the screen.

The brightness level, at about 315 cd/m² is pretty decent, while the 1500:1 contrast conforms to industry-wide gaming laptop standards. Coupled with the matte screen finish, this laptop will retain an adequate visibility level in outdoor surroundings with mild exposure to sunlight.

It fares considerably well with its color coverage, 98% for RGB and 65% for Adobe, the latter marking it out as slightly above a halfway decent multimedia editing tool.

The in-house MSI True Color app deserves a mention of its own, with its five display setting presets( Gamer, sRGB, AntiBlue, Office, and movie) available to choose from. Gamers will appreciate the first two modes, as they add spice and flourish to what is ordinarily an impressive showing, making for an even more enjoyable gaming experience.

This much is evident in the speed and smoothness with which it executed a vast majority of the workloads that were thrown at it. Whether it was rendering 3D details or applying special effects on Adobe Photoshop, transcoding high-res videos, or playing the biggest Triple-A games, the experience was thrilling, with frames reaching record figures at some point.

On the downside, the power draw of this GPU is quite a handful, and it’ll provoke a frenzied reaction from the fans at the peak of its powers.

And as is almost always the case, you’ll only get to make the most of this graphics card when plugged into a power source, as only then can it reach its boost speed.

The RTX 2070 Super Max-Q graphics card puts the pedal to the metal inside of this laptop to drive it to the intense heights of gaming. With its 8GB GDDR6 memory getting adequate support by way of 32GB of system RAM, not to add the 10th Gen Core i7 processor, the GPU is well set up to blitz past the biggest titles in the game.

This laptop will cut through most games at a steady 60fps when played at its native screen resolution, even at the maximum settings. While the frame rates will ordinarily be influenced by the optimization, or lack thereof, of the games in question, the laptop will still be able to run the gamut of the AAA games at comfortable frames.

From Metro Exodus to The Witcher and Valorant, the laptop can take them on without incident. And when you call on the powers of ray tracing, as with games like Control, the frame rates will hover around the 45 fps orbit, more than enough to feel every pulse of the action.

The battery life of this laptop is pretty much decent, but not exactly too far out of character with what we have come to associate with gaming laptops, which is poor battery life. It is helped in no small part by its 99.99 Wh battery capacity, a record figure by $600 gaming laptop standards.

This translates to a longer runtime(over 6hours) for media editing, streaming videos, and even the odd gaming session. Not that I would particularly recommend that you pull the plug on this laptop while gaming.

Other than the drastic depletion of the battery reserves, you’ll have to worry about a slight drop in processing speed and stand the risk of getting a performance drop in return.

The GS66 plumbs new depths with the cooling system that it employs to service the processors, and it borders mainly on the erratic behavior of the fans. Even with the system in idle mode, the fans will still constitute a worrying concern.

There is some brief respite with the fans on silent mode, at the risk of a drop in performance, but it only serves to paper over the cracks without addressing the underlying cause of the problem. On the flip side, the overall system temperature remains at tolerable levels of warmth, despite the slim profile of the laptop.

The underside of the laptop may get warm on occasion, especially with heavy computing ongoing, at which point you should keep it at arm’s length to your lap. But these are rare occasions, what with the fans in near full swing for most of the time.

If the parameter for rating this laptops’ Core i9-10980HK processor is single-core speeds, then it gets bonus points, but with multithreaded clock speeds or energy efficiency, it will probably not get full marks. What this means is that this laptop will not be able to utilize the full powers of its eight cores. This is a little bit pronounced during heavy multitasking, especially with CPU-intensive tasks dominating the front row. Still, it does very little to detract from what is ordinarily a brilliant multitasking performance, in comparison to other gaming laptops.

There is more than enough power to slice through a large number of computing tasks that this laptop will be subjected to. Heavy-duty tasks like complex coding, 3D designing, and data analysis will exert considerable power from the laptop, but it will cope fairly well and blow lots of steam in return.

And when the processor turbo boosts, upwards of the 5GHz mark, it will take all the aforementioned tasks to the cleaners. Other than that, this laptop will make a waltz of system tasks, as with booting up and launching apps, as well as word processing, image editing, and streaming tasks. It is at gaming that this laptop comes into its own element, not surprising in the least.

The MSI G66 pieces together an impressive cast of components and features that set it up nicely to deliver all the excitement of high-end gaming.

The A-Listers range from the 300 Hz refresh rates of its screen to a Thunderbolt 3 port and a Wi-Fi 6 provision, all of which joins forces with powerful processors to produce smooth and fast-paced gaming in a canter.

Admittedly, all of these come at the expense of other things, and that’s without mentioning the hefty cost of the laptop. There’s the racket of the fans in their rush to blow out the heat, and the battery that takes all the heat from the exertions of the processors, summing up to make things interesting.

If you can overlook all of that, then you can look forward to a thoroughly thrilling gaming experience.