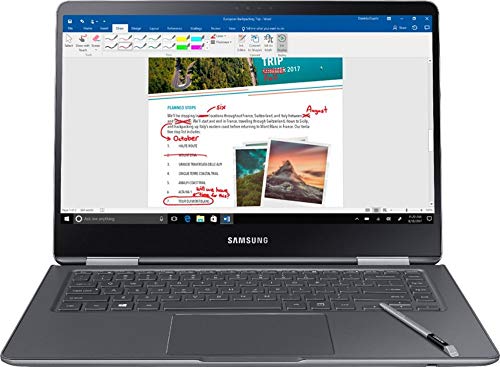 The Samsung Notebook 9 Pro has one major string in its bow, the S pen, and it is a real stunner. It is the laptop maker’s answer to the Wacom EMR stylus on the Acer Chromebook 13 spin and the Surface Pen from the Microsoft Surface line of convertible devices, but it is not the only thing that catches the eye.

There’s an AMD Radeon 540 graphics card that will give you a good shot at gaming, an 8th Gen Core i7 processor that will power through computing tasks from the home to the office, and an enduring battery to boot.

It is a convertible device, so it should ordinarily make some concessions to fit powerful hardware into limited headroom. But this laptop manages to tow the path of very little compromise, evident in the quality of the system components that it parades.

There are some downsides to this approach, as it means that this laptop will be incapable of delivering the spectacular. It even settles for average in some areas, as seen with the audio, while the weight is another sticking point.

But as good as spectacular can be, there’s even better, the capacity to get the job done, and the Samsung Notebook 9 Pro is pretty good at doing just that.

At the exterior of the lid, the Chrome Samsung logo leaves its mark on a matte-aluminium finish that puts the gloss on the frame. The edges of the lid are curved, and there’s hardly ever any trace of flex that can be felt as you flip it.

You can flip it through a 360° arc, transforming it from regular notebook to display mode, tent mode, and tablet mode in a canter. It is helped in no small part by the sturdy hinges that pivot it, holding it stiff at any viewing angle and still flexible enough to allow for a seamless full-circle flip. The hinges also sport the same sheen that can be found on the lid, and there is a stretch of exhaust vents that is sandwiched between them in the same full-length strip.

These vents serve to expel hot air from the insides, and they do so with very little fuss.

Weighing 3.79 pounds and possessing a form factor of ‎13.7 x 9.4 x 0.7 inches, this laptop might look a little unwieldy in tablet mode, but it is relatively light enough to be easily lugged around.

There’s a decent supply of ports on the pro, both old and new, with the USB Type-C port as the highlight. On the right side, two USB 3.0 ports are joined by a microSD card.

You’ll also find a headset jack, an HDMI port, and the power port to the left of the deck. The Thunderbolt 3 port is a luxury that this laptop can not afford, unsurprisingly so, while the MiniDisplay Port is another notable omission.

802.11ac Wi-Fi and Bluetooth 4.1 are on hand to provide wireless connectivity.

The keys on this backlit, chiclet keyboard are very well-sized and well-spaced, with the arrow keys and page up/down keys as the major beneficiaries, and the omission of a Numpad as the biggest concession.

And with a keystroke that is registered against an actuation force of 73 grams, travel of 1.4mm, and feedback that can not be mistaken for anything other than a click, this keyboard is in a good place.

And while the keycaps could be better off with a little less slick, and a little more concavity, it will be pretty easy to get to grips with the feel of the keys once you wrap your fingers around them a little more often.

At 4.5 x 3.3-inch, the touchpad is generously sized, fitting for long swipes and lengthy scrolls. And as it is located at the center of the keyboard deck, there is plenty of elbow room for your hands to rest on as you navigate through other parts of the keyboard.

It also provides accurate recognition of all two-finger and three-finger gestures, making for all your inputs to be registered more quickly.

The input ensemble is rounded up by the S Pen, and it is an absolute delight to work with.

For starters, it will not require a charge to remain powered, and then there’s even more.

It comes pre-loaded with an app, known as the Active Command, which integrates all the functions for taking notes, drawings, and other design tasks. This app can be launched in a snap as soon as the pen leaves its slot at the laptop’s bottom, or by pressing on the button when it is close to the display.

The duo of stereo speakers that service this laptop are sited at the bottom, so there’s only so much in terms of intensity that you can expect to get from them. They will just about hack it for conversations over skype or zoom where bass and loud volumes are not a priority, not so much for gaming or for consuming any media content.

In the absence of any helpful software or an in-house audio program, you can always meddle with the series of sound profiles in the system settings. Even then, you might still need to settle for headphones to make the most of the options available.

While the 350 nits rated brightness of the screen is undoubtedly its biggest draw, there is a fair amount of extra details that dot this 15-inch screen. The resolution, at 1080p(1,920-by-1,080), will make for a standard grade view, and the 16:9 aspect ratio is an apt choice for nearly every on-screen content.

Color is in no short supply all around the screen, and the clarity of the display can not be faulted at any viewing angle. And with an impressive 106% coverage of the sRGB gamut, there’s a rich palette of colors and shades to work with, especially in tablet mode, with the S pen as a handy tool to cater to all your artistic endeavors.

The screen bezels are relatively trim around all but the bottom part of the screen. At the top bezel, a 720p, IR integrating HD webcam can be found. Making eye contact with this webcam will log you into Windows 10 via the Windows Hello platform in the blink of an eye. Other than that, the webcam will also fare fairly decently during video calls, although the display might get a little bit patchy at times.

The AMD Radeon 540 graphics card on this laptop is no heavy-lifter, and so it will struggle to cope with overly demanding workloads.

If you intend to use this laptop for light graphic tasks, as with CAD designs, photo editing, and some video editing, then it’ll be smooth sailing for the most part. However, it is a little less straightforward when it comes to gaming.

This laptop will hold its own with less demanding games like Rocket League and Hearthstone. The frame rates will not reach the ceiling and you’ll mostly have to settle for graphics set to high at Full HD, but your gaming sessions will not be plagued by lags and stop-starts.

But if you step up to the big guns, as with titles like Red Dead Redemption or Control, then you’ll be stretching your luck too far. On the whole, this laptop will deliver a decent performance in graphic demanding tasks, as long as you can steer clear of the tasks that ask for too much.

The 54 Whr lithium-ion battery in this laptop is one of its most prized possessions, and the laptop maker takes great pride in it. It promises an operational period of about 11.5 hours if we’re to go by official figures, and then it very nearly delivers on that promise, going by the feelers that we’ve received.

With the USB Type-C port in the mix of things, you can quickly charge this laptop on the go, and it will still pack enough power to last a day. This battery outlasts several other laptops in its size and price class. And it is probably helped in no small part to the tolerable power draw of its hardware components, none so much as the AMD-based GPU.

The fans on this laptop are pretty well behaved, but not as a rule, especially when the most demanding tasks are weighing down on the laptop.

With heavy workloads that engage a large part of the cores and shaders in the processors, the heat that will inevitably be produced will warm its way into the heart of the chassis, quite literally.

And then it will warm up the laptop’s bottom, to the point where you might start to feel the heat.

But as soon as the fans get wind of the situation, they swing into full gear and blow away the heat.

And while they are at it, they will make the slightest noise. Other than the fans, the laptop gets a fair supply of vents and grilles for air intake, just enough to tip the temperature scale in its favor.

Powered by an 8th Gen Intel Core i7-8550U processor, the Samsung Notebook 9 Pro is well stocked for firepower. It gets support by way of 16GB DDR4 RAM, and although the 256 GB SSD base storage capacity of our review model is not exactly extensive, it will not put a damper on the laptop’s normal working operation.

Stream high-res video content at home, surf the web, and engage in some light gaming, or do it all at the same time, and the laptop will not flinch. Sketch, draw, and ink your way with the S Pen into the 15-inch canvas, or put the Radeon 540 GPU to work with graphic designs over Photoshop and you’ll be impressed with the quality of the output.

Take the laptop on a trip down the productivity lane, jot down notes from team meetings, prepare documents with Google Docs, keep ’em coming, and the laptop will keep on going. Lags will only ever creep in when you get down to serious gaming, or when your multitasking exploits have covered almost every breath of the 15″ screen.

But if you limit your Chrome tabs to a little over two dozen, and make sure to stay away from so-called Triple-A games, then you’ll be able to maximize the full potential of this laptop.

With a flexible utility, impressive battery life, bright display, and a writing pen that steals the show, the Samsung Notebook 9 Pro is a pro at almost everything that it does.

While the Full HD touchscreen display offers smooth and vibrant visuals, the Radeon 540 graphics card will suffice for light gaming. You will not find a Thunderbolt port at the edges, or a Numpad at the keyboard, and you’ll most likely not find the speakers to be of any particular interest.

But all of these cons pale significantly in comparison to the Pros, and there is quite a lot of the latter, even more, remarkable for a laptop of such modest pricing.